So I tried my first two stage carve one pine, and roughing cut came out great (1/8 downcut bit). The detail pass (using a 60 degree bit) on the other hand, did not. In some spots there is no problem, however in others there was material missed. I still can’t get my Z-Probe to function properly, which is a whole different problem, so I’m doing a manual zero. Before I changed bits, I pressed the 1/8 bit down into the pine to make a mark/small divot to use as a reference point for the 60 degree. I would assume that x,y shifted if the problem was consistent throughout the whole piece, but it’s only in random areas. Any input and help would be greatly appreciated, as I’m feeling pretty defeated after working on it all night/morning. 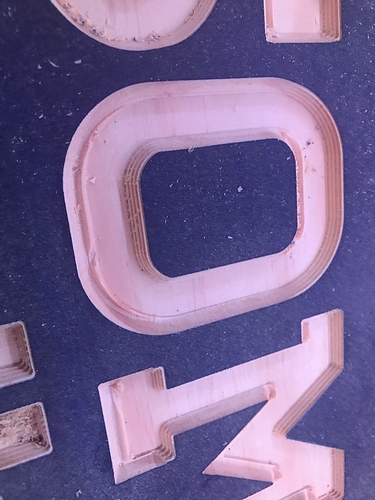 The best answer is to look at this video. I have use multiple bits and two stage carving a lot. Check out this. It should help you.

On your detail pass depending on your final depth and the bit you use you can set it to cut that pass at full depth in one pass. This way you get a cleaner cut.

I didn’t think about that, I just went with the recommended settings. So if I was at .25" deep on the final cut, I would put the depth per pass at that as well? I know you’re (suggested) supposed to cut no deeper than half the diameter of the bit. Being it was a 60 degree, I figured I’d be okay at .25"? Or you think it would be better at .125" and just run two passes?

Unless I missed something (which I was watching this at 3AM) it didn’t really answer the problem I was having?

@AdamBlum. I showed that video because it clearly shows two stage carving and some examples as to how I test carve before carving the actual project. From looking at the picture it looks like the 0,0 point moved when you changed bits specifically on the y axis. I don’t think it has to do with step over. The roughing pass would be 40% and the v bit for the detail pass step over is 1%. That’s not the issue