Continuing the discussion from Upgrading to the Dwalt 611:
Hey Angus,

I just screwed a piece of aluminum about 3 feet long vertically and then tie wrapped my cord to that just making sure I have enough slack for the cord to reach all the way around my 1000mm waste board and it works fine…it’s just how I did it and it’s been no problem at all.

You may not want the 110V AC cord sitting right next to your motor wires. Some people on this board have reported interference if the AC cable is inside the drag chain.

Not very good with electronics so if the logic is off, just let me know. Lets just assume one wants to lay the power cable inside the drag chain as worst case scenario. If the problem is that the power cable is creating an magnetic interference, and the stepper motor cabeling is suspetable to it would it be possible to wrap either the power cable to contain the magnetic interference or to wrap the stepper cables to protect against magnetic interferece. I did some quick search online and found some products that seem to get this result, second thought was there might be a specialty tape that could replicate a similar results but be cheaper and easier to get. If anyone is good with electrical i would also like to know what they think.

I just zip-tied mine to the outside of the drag chain as well, works great. No trouble at all for me!

i’ve put mine in the dragchain (1000mm x-carve), no problem detected, but the powercable is a bit short ^^
it just appears from 20cm off the dragchain at the end

Yep, standard chain. So far I’ve had no trouble with it in the slightest, either with the original control system or with the new X-Controller. I’ve done nothing special at all, just put the router in the mount, left an inch or so of slack in the cord for flexing, and zip-tied the length of the cord down the side of the X-gantry drag chain. Once it leaves the left side of the gantry, it has just enough slack left to conveniently reach the relay box which is sitting right behind the controller on my table.

Honestly 1mm or so of plastic isn’t going to stop RFI, so putting it on the outside vs the inside won’t help too much (yes there will be a slight change in capacitance, but not much). As @AngusMcleod pointed out the right thing to use are Ferrite Cores to suppress RF.

Electromagnetic fields decrease exponentially with distance, so a small amount of separation can result in a large reduction in field strength.

I cut the end off the cord and added cord to make it longer. Ran it through the drag chain and have no issues with it, just make sure there is slack enough to bend where it needs to.

[quote=“DanielAlderman, post:13, topic:19847”]
I cut the end off the cord and added cord to make it longer
[/quote] Too bad dewalt doesn’t have a replaceable cord like the Festool Plug-It Power cord system, then again for a CNC im not sure i would want to spend 500 on one of their trim routers and not use it to its ability.

I too ran mine zip tied along the outside - it was easier to drape the power cord towards the power block than route it to the controller and I didn’t want to deal with wiring it through as an afterthought when I originally wired it out.

This, as in many things, there is no one perfect way. It comes to what works for you.
I even mounted a light on the X carriage and that makes it much easier to see what is going on.
I do need to square it up as it is not cutting quite flat.

great idea, I thought of doing the same - they make led strips that fit into tslots even… just haven’t gotten around to it and with the led on the dewalt plus a few shop lamps my table is pretty lit for what i need at the moment.

I too cut the cord on my Makita and put on a new male plug then coiled an extension cord through the drag chain. It’s held on by a small clip attached to one of the Z motor screws.If I need to use the router on its own just use another extension cord. 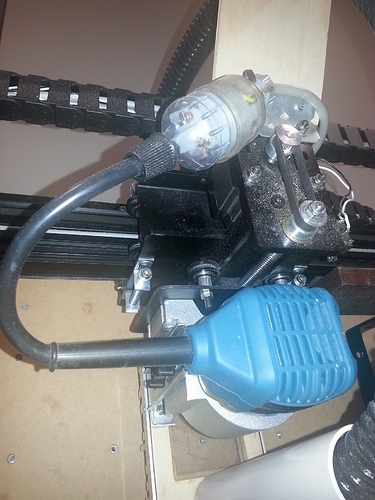