Anyone else had a problem with the DeWALT 611 burning up? My first one lasted about three months but I had it set to 6 and didn’t realize so the brushes burned up. I purchased a new one, set the speed to 2 so it would last longer (or so I hoped), and thirty one days later it didn’t just burn up, it caught on fire during a carve. At this point I’m hoping it didn’t mess up my XCarve. What am I doing wrong?!

That Dewalt is just not heavy duty enough…I had similar probs and finally upgraded to a Hitachi.

Made all the difference.

I’m partial to the Makita, many people use them in their CNC for milling aluminum and it can be fitted in the X-carve.

I 2nd that. Mine has been running strong for three years. Same brushes. The one thing that DID break was that little red button you push in to lock the spindle so you can loosen the collet. That just broke this weekend. Now I have to use two wrenches to change bits. I am sure there is some kind of tool-less chuck I can put on it.

P.S. I had the same Hitachi - sold it and got the Makita. The Hitachi was HUGE.

Which model Mikita? And there is a decent chuck I use from Muscle Chuck…

The RT0701 - the same one everyone has. It has a better RPM range. With Muscle Chuck, would I have to buy all new inserts?

Is the Makita router quieter than the DeWalt? I’ve had the DeWalt for 2+ years now with no problems at all, but it’s noisy and has been since day 1.

WAY queiter - especially at low RPMS. But the Hitachi made even less noise at low rpms.

It is not well known but the Makita has a 3/8in collet available, I have it in my collet collection. 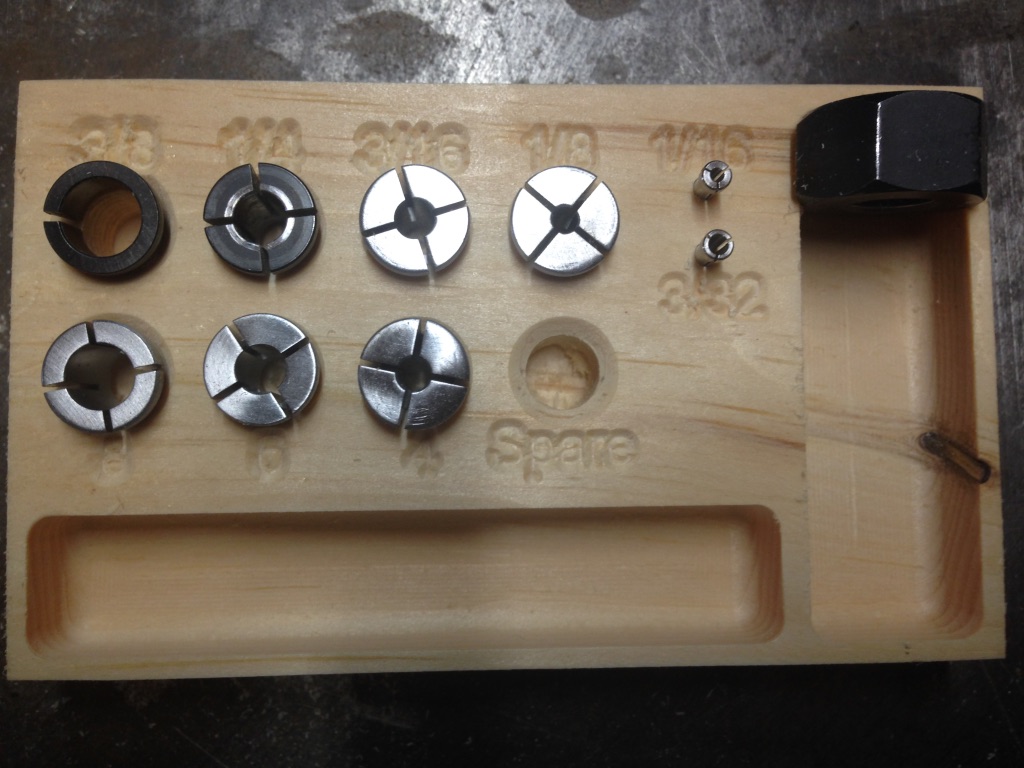 Nice. After 10 years of CNC work though, I’d hate to add yet another dimension to my collection. I do thousands of metal carvings and engravings and only dozens of wood. So, my cost of production has to be minimized.

Dewalt 611, Bosch Colt and other palm routers that have a plastic sub-standard housing will over heat from prolong use and what happens when you heat up plastic to 180 plus deg, well it starts to get soft causing premature failure. Also need to take note of the type of bearings that are in the router, they to are a substandard quality and are likely to seize from prolong use. If you want your router to last then you might want to go with a router that has a metal frame like the makita 1.25 hp or the porter cable 1.75 hp. Invest in brush set and replace them often, invest in a good set of high temp resistant ceramic bearings. Or invest in a brush-less 2.2kw air cooled spindle. If your pocket book is deep enough there are a lot of things you can do to resolve the spindle issue.

Or get rid of the hobbyist palm routers entirely and invest in a ‘real’ CNC spindle.

I have had my Dewalt 611 for about 4 years, I rarely run it above the 3 or 4 setting. I ran it for about a year and it starting to make grinding noises. I shut it down and bought a Makita. Dummy me I later went to another CNC forum and found out the brushes can be replaced (newbie mistake) I bought 2sets of brushes on Amazon, watched a short YouTube video and the Dewalt was back in service like new. I’ve replaced them 2 more times just about every year+ in the mean time I use the Makita when a low RPM is needed. Maybe your end milks are full or your feeds and speeds need to be adjusted for the end mill and material you are cutting. The Dewalt is a workhorse in my CNC.

If your using a DeWalt or a Makita (like i do) you probably have also a dustshoe system.
i do youse the vacuem not only to keep my bit surounding dust free, but also to drain the warmt from my router.
i do this for two years and my router runs long on a dayly base. never had problems as i did read above.
(ps… sorry for my bad written english)

I don’t have any advice on the DeWalt as I use the Makita. But, after reading several stories about losing brushes, I looked at mine. They were still very good. Then, I went on EBay and bought a cheap little “timer”, about $7, and wired it into the X-Controller power bus. See photo. Then, I added an item to my PC calendar to “check the timer and/or the brushes” periodically. I don’t have any data yet to say how long my brushes will last. I did order a new set so I wouldn’t have to be down for several days.

I’m just a hobbyist, (no business), but I would guess that “ordinary” routers and vacs are just not designed to run continuously for hours every day and be expected to last forever. 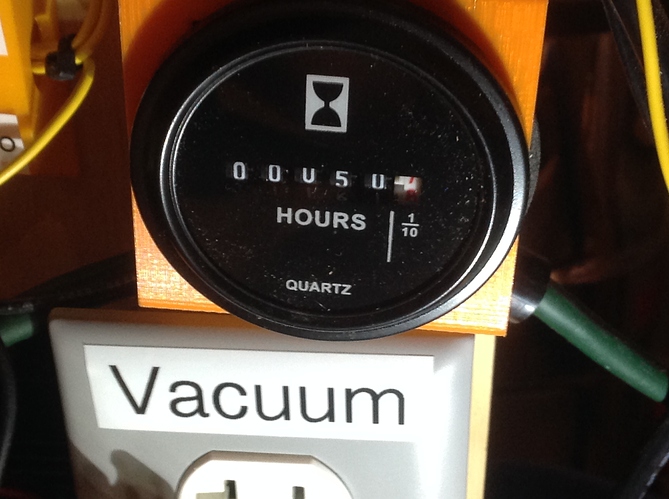