I had a Dewalt 611 onhand, bought the new “extruded” mount for my Shapeoko2. Installs just fine, no real problems with installation or anything. Shapeoko2 has the ACME+belted z-axis upgrade (pre-X-carve, but I certainly see the influence). Long story short, the end mill can’t reach the wasteboard–short about half an inch, maybe more. I’d adjust the Z slide down, but the stepper for the belt drive has just a couple of mm to go before it collides with the back of the X axis gantry.

So that’s kind of embarrassing. Any ideas? Upgrade X and Z bits for X-Carve parts? Some other oddness?

Or did I put something together wrong a year ago and now I’m feeling the effects?

Can you post a picture? Are you planning on upgrading it to the X-Carve? I upgraded mine and think it made a big difference. Here is a video of me upgrading mine. Shapeoko 2 upgrade to the X-Carve

I decided to do the collet lock cutout mod posted by @Sisco and now my Dewalt is a good inch from the wasteboard, using an Inventables engraving bit, before the Z axis V-wheels just slip off the vertical makerslide rails. I’ve come to the conclusion that we’re just going to have to stack up a few pieces of 1/2" MDF, get a flat end mill, and take off 0.1" across the whole thing to make a raised sacrificial wasteboard. Beyond that, try opening the mount and dropping the Dewalt a half inch?

Thanks for your interest! Try not to judge… 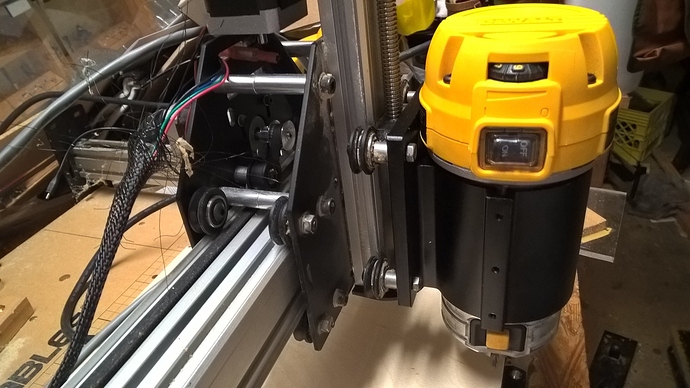 Quick note–this part is thicker than than the original Shapeoko2 part, so buy screws to match–I saw a mention in the comments for the X-Carve part that screws aren’t included, and the screws for the idler aren’t available on Inventables (McMaster-Carr!). The V-wheels take 20mm screws on SO2, 25mm on V-Carve. I anticipate that bit of fun for every part I replace.

Great post @BrentRuple do you think that by installing a dewalt 611 in my Shapeoko2 will reduce the work area? comparing with “kit” motor tool?

The 611 and mount will take some off the back of the work area with the SO2 Y-axis plates–more precisely, it moves your entire cutting area forward (on the Y axis) a ways, and off the front of the spoilboard. The X-Carve plates that ride on the Y axis appear to be set back to account for this to some extent, but I haven’t installed them yet to see how much.