So, at the request of one of my commissioners, I made these earlier today! I’ve made a similar one for the same ink set that had both pockets cut with the X-Carve, and stands made with manual tools. The fellow liked that, but he wanted a smaller, more compact design to take up less desk space. So, this is what ended up happening! This could very easily be done in Easel, no problem at all. I chose to use Fusion 360 for it, since that’s where I model my designs, and sent it with CP.

These are made of cherry, finished with Deft semi-gloss lacquer. The pockets were done with a 1/8" upspiral Freud bit at 60ipm and .250 depth with a .090 stepover, router at 5. There were two passes for each pocket, a roughing pass that was an adaptive clearing one, then a finishing pass that was conventional pocketing. The walls were cut twice, removing .015 each time, with the final pass repeated.

The outer profile was done with a 1/4" Freud upspiral, at 21 ipm, again at .250 depth of cut per pass, and router speed roughly 3.5. There were two finishing passes here as well, each of .015 again, with last pass repeat. There were six tabs, triangular, and sized such that the router bit chamfer removed them entirely.

Here was the idea, as drawn out in Fusion: 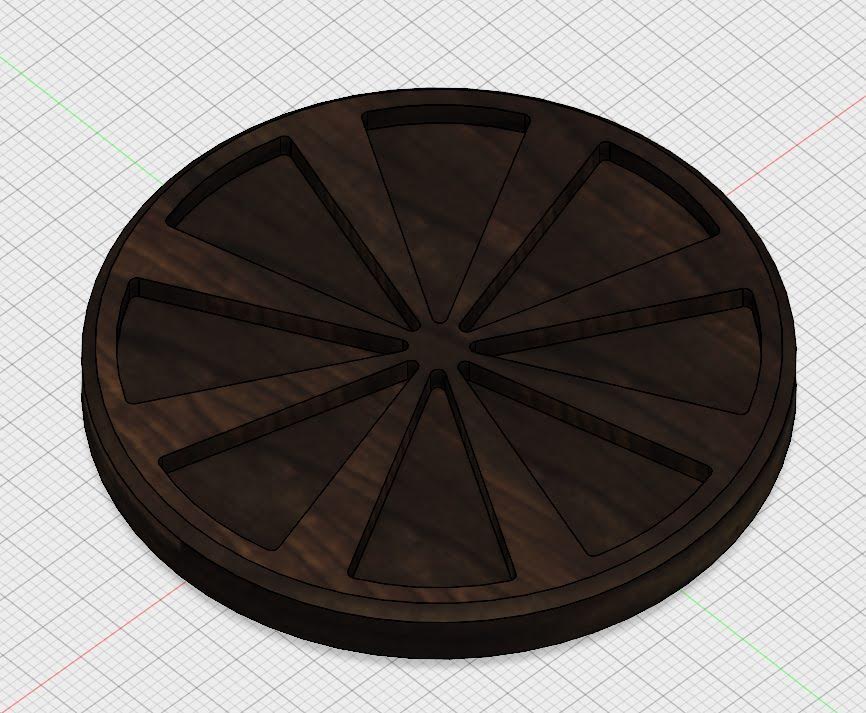 And here’s how they came off of the X-Carve, checking to make sure the ink bottles fit: 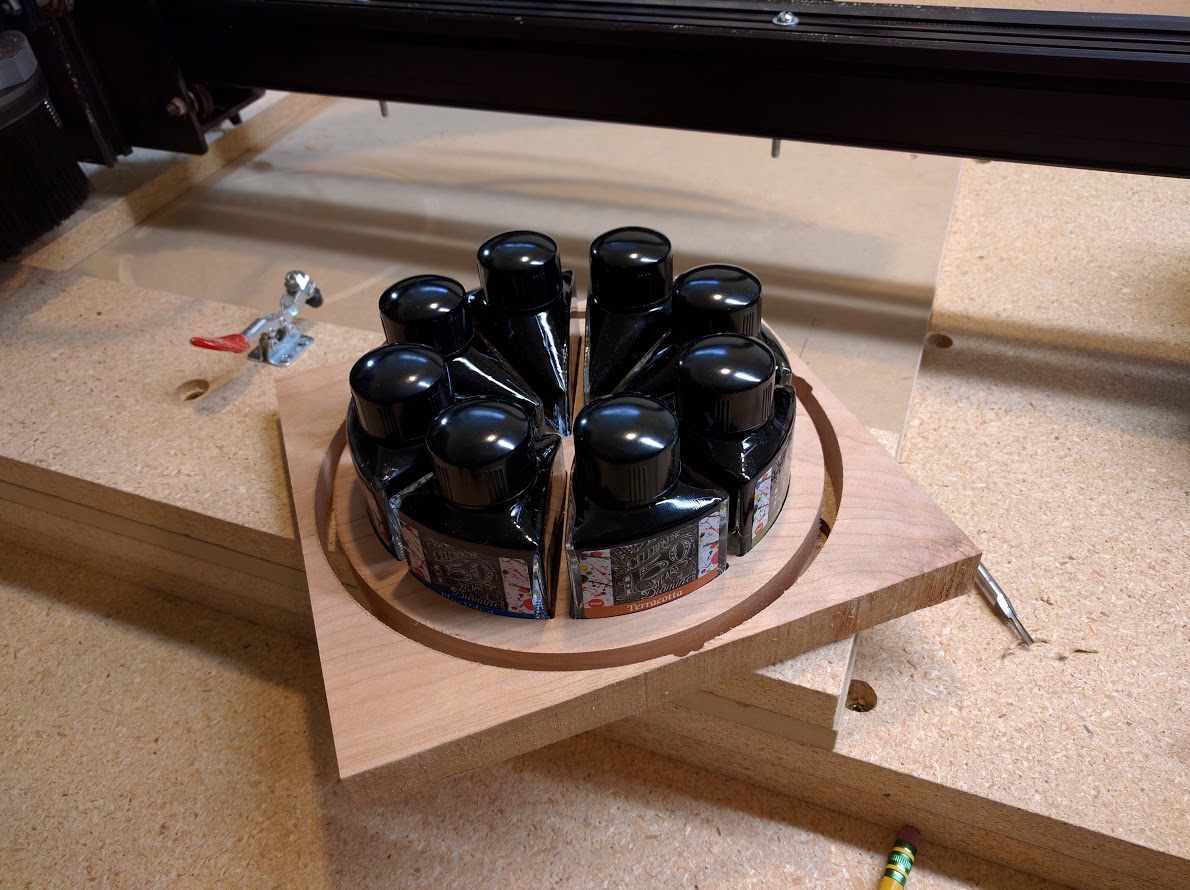 Tad bit of band saw, router table and sanding to clean it up nicely: 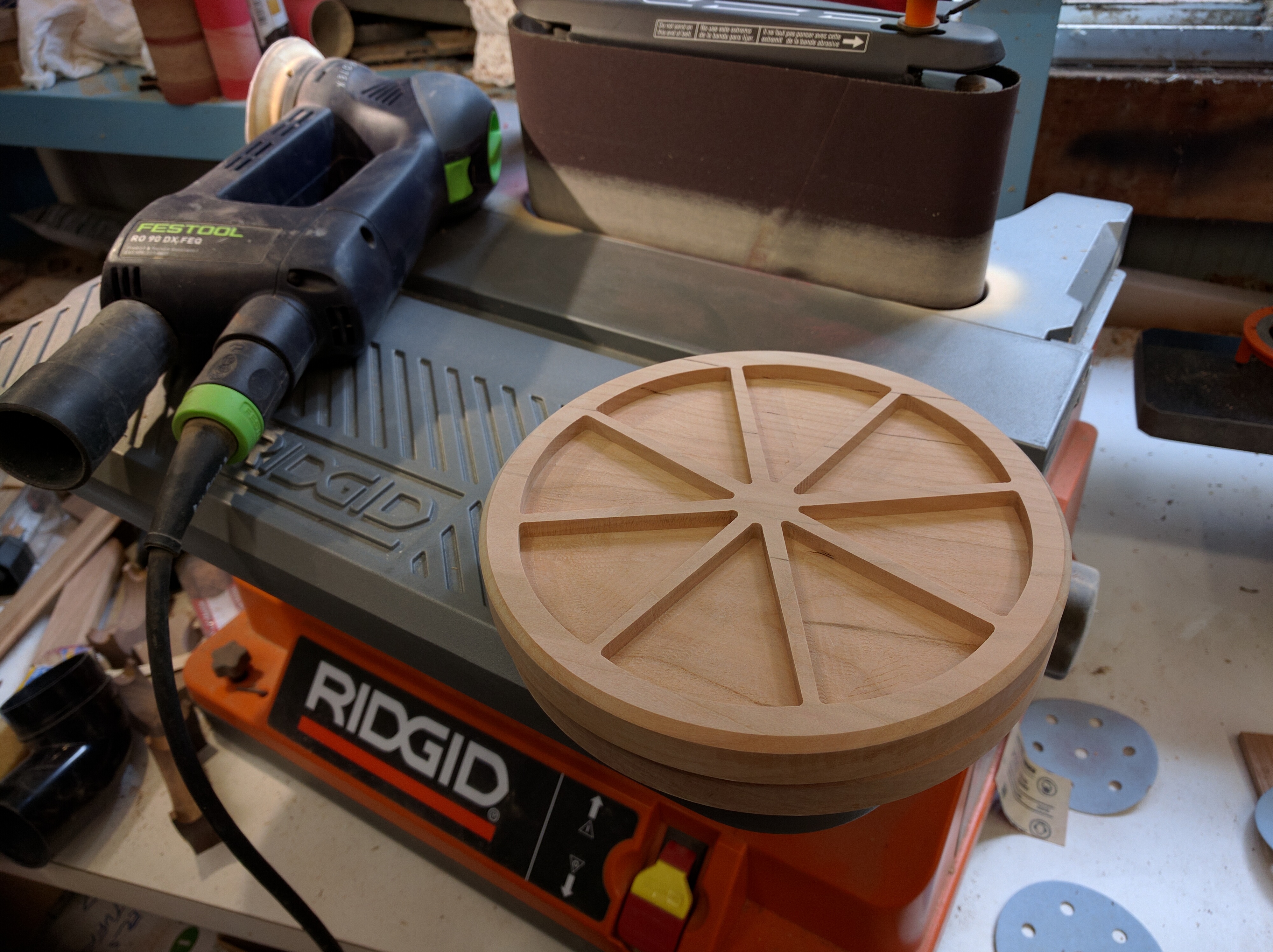 Then a couple coats of finish!: 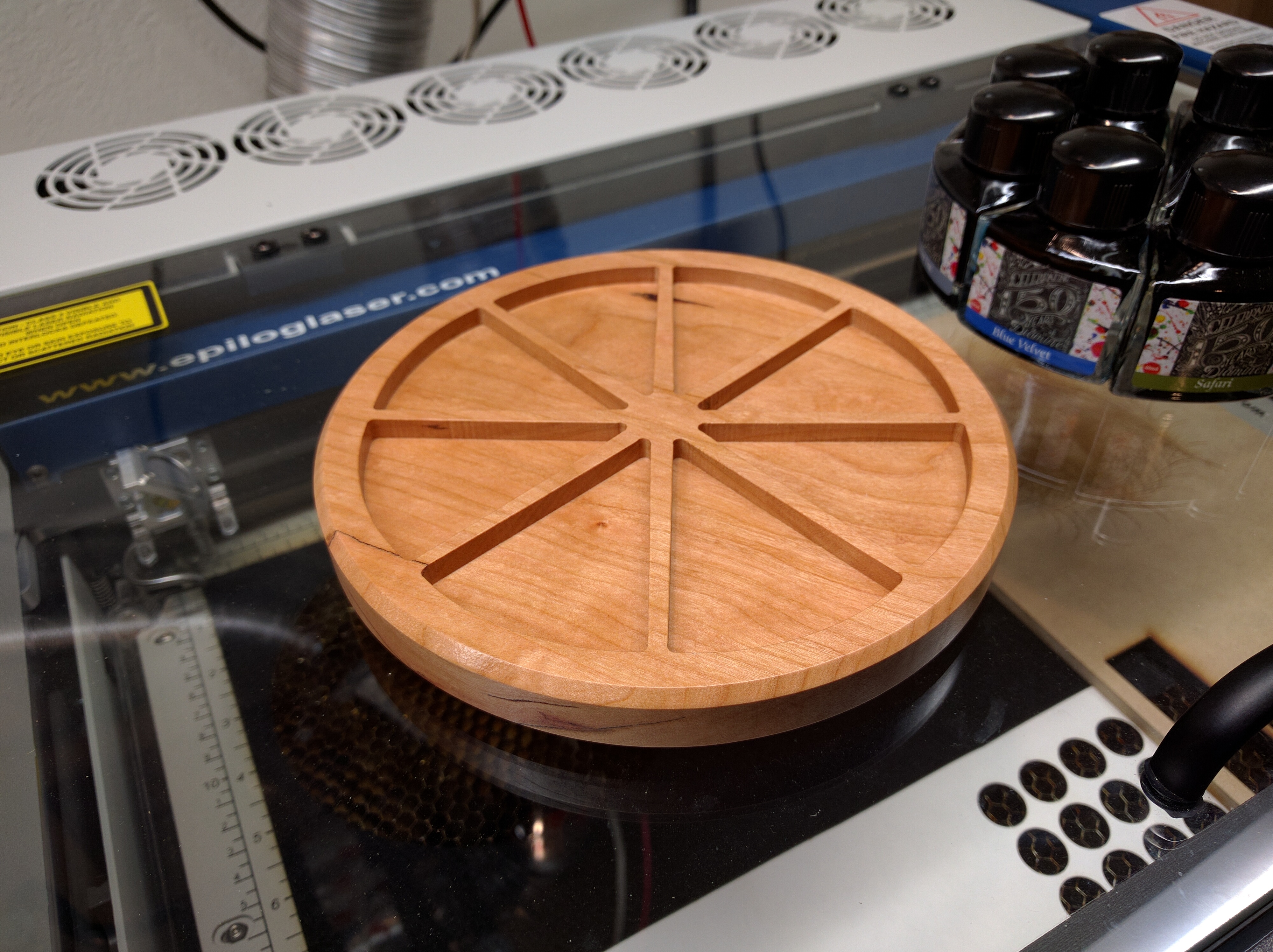 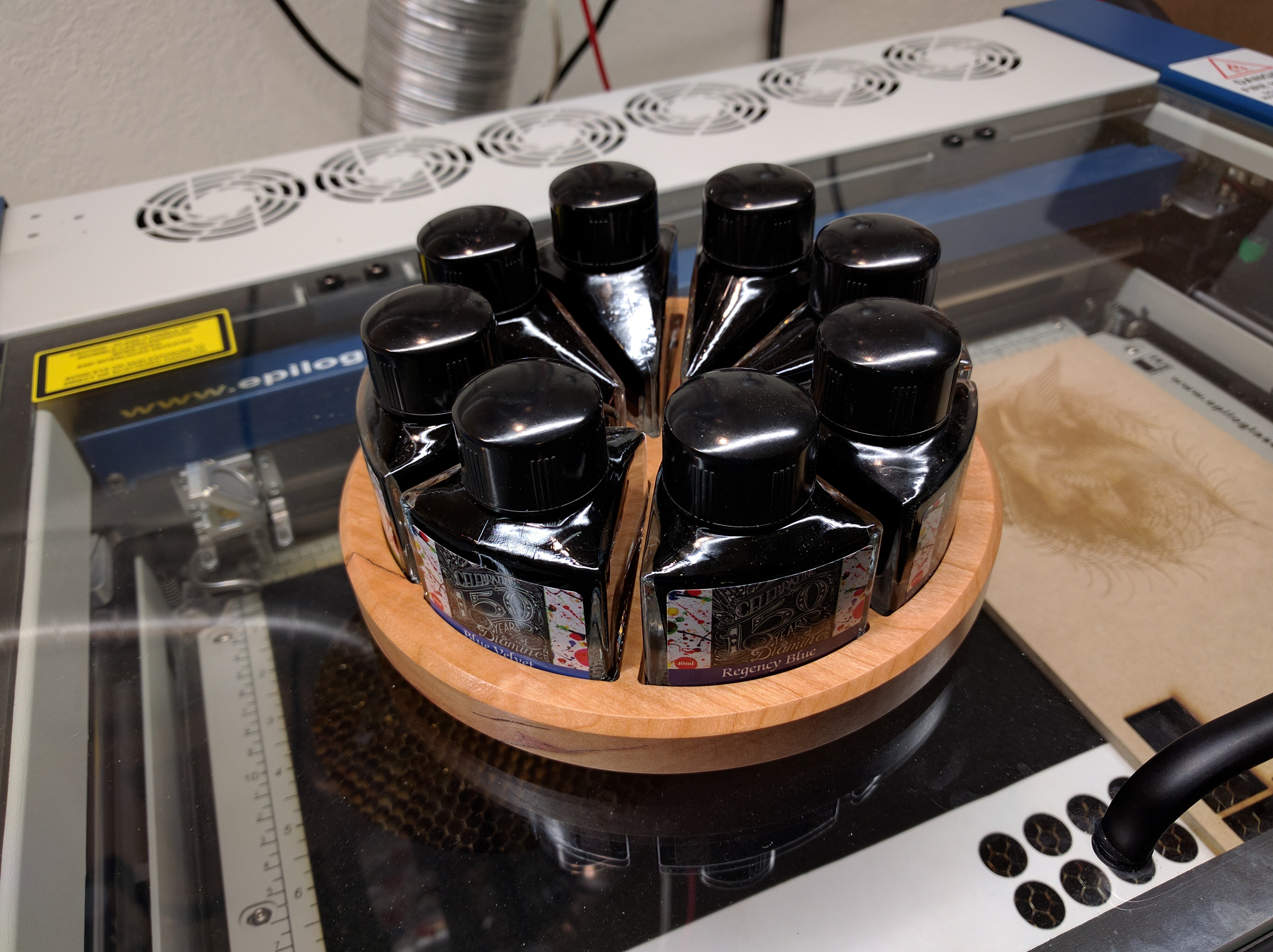 This is Deft semigloss lacquer, two coats with a 800-grit sanding between them. And thanks!

And made another iteration, this one has the pockets lined with green felt from the local craft store. I just projected the pattern in Fusion onto a separate sketch, saved it as a DXF, and sent it to the laser to cut the inserts. Cut them and used craft glue to stick them down well. Came out pretty nicely, I think! This is my first shot at lining the pockets in one of these, and I think I’ll continue doing it! 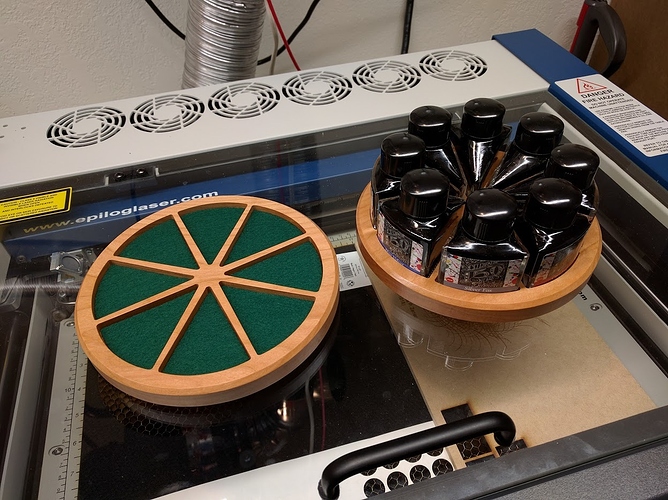 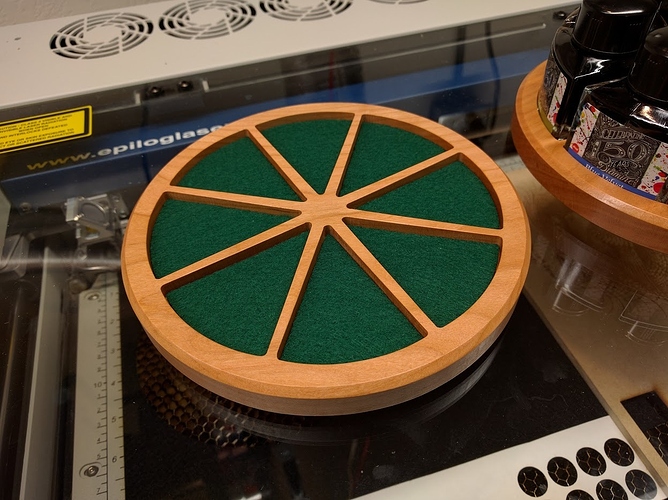 Thanks! I think I’ll be doing the bottoms of pockets lined a lot more often. I’d bet the JTech laser would do this very easily as well, the felt cut EXTREMELY easily under my Epilog’s beam. Probably just a couple passes with the JTech would do the same thing.

Ok, and I’m just starting work on the final iteration of this. The obvious next step… put it in a sub-base, and make it spin on a lazy susan!

Going to be machining the sub-base today, I just finished the glue-up for it last night, I didn’t have a single piece of wood large enough so I had to do a two-piece glue-up. Was going to machine it last night, but when I went to put it on the X-Carve, I realized that my tooling was set up for .750 thick stock, and the toggle clamps didn’t have enough range of adjustment for the .900 needed for my sub-base design. Easy fix, I’m just going to laser-cut some spacers tonight and stick 'em under the clamps to raise them up that extra bit, but I didn’t have time for it last night.

Fingers crossed that everything fits together!

I know this may be a long shot but are you still able to make the Diamine Ink Stand?

I do still make this! I actually just made one a month or so ago. Drop me a PM and we can set something up.

Works great with suede and velvet as well, just the suede stinks like a sonovagun!