Disaster of a day

Than God this day is nearly over. It has been a disaster. I spent a while calibrating the steps/mm in universal gcode sender, that went perfect.
Then I went to make my nephew a Christmas decoration. While lowering my only 1/16 bit to the workpiece I pressed the z down button by accident with the increments at 15mm and drove the bit into the workpiece ,shattering it into tiny pieces.Then I went for plan b. I spent the last week or so going through the search function and @PhilJohnson website for f engrave and universal gcode sender tutorials and thought I had the basics down. (Well I was wrong there) . Went to put my new 1/4 inch shank 60 degree into the spindle only to find out the seller on ebay sent the wrong one and sent me 6mm shank bit. Went to give the 90 degree v bit a go. I loaded the g code into universal g code sender and thought I had everything zerod to the workpiece turned on the spindle on and pressed send. Well it drove my new 90 degree bit through the workpiece and into my wasteboard. I hit the e button in record time but forgot that doesn’t turn the spindle off lol. Smoke every where. So now I have to get a new 1/6 , a propper 1/4inch shank 60 degree v bit and a new 90 degree v bit. And maybe re calibrate the machine.

A lot of ebay 1/4" shank bits I have bought turned out to be 6mm bits. I bought a 6mm collet from Elaire so I can use the 6mm bits as those tend to be cheaper and more available.

Stick with it, it gets better

Thanks Erik. Here’s a little clip of it lol
Ye, I’ll have to get a 6mm collet while I at it. 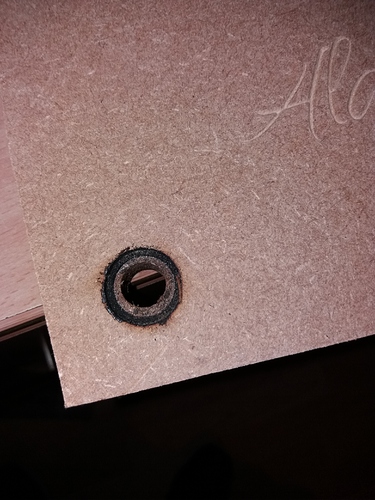 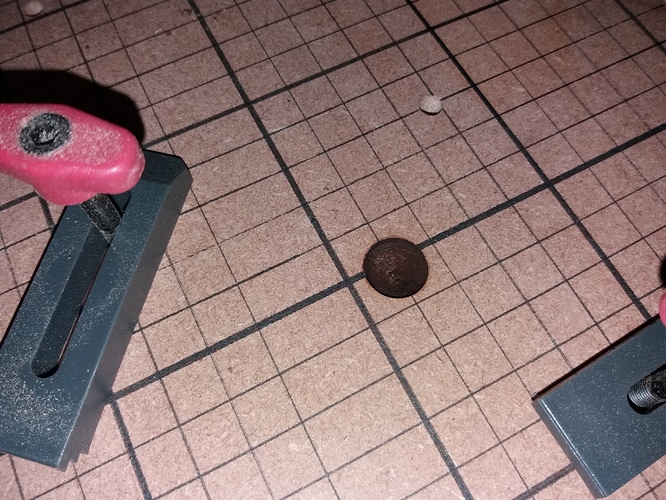 It happens to the best of us just caulk it up to X-Carve heart stopping function.

Thanks for posting and it does get better.

Thanks Charles.
Yes , lessons learned. I guess I have a lot more reading to do before touching UGS again lol

A good source for inexpensive bits is eBay’s: https://www.ebay.com/usr/drillman1
also Amazon; however, I’ve had good luck with tapered end mills instead of the small diameter ends. The tapered end mills are more forgiving with 1/4" shank.

My best advice is have two bits of a particular type and size because you just do not know when the z will over plunge or a clamp jump into the tool path.

X-Carving can make a winding twisting mountain goat trail seem straight and the view of a successful project weather a sign or 3D carve makes the breathtaking summit views pale in comparison, so keep the post coming weather successful or not because we are happy to hear from a fellow X-Carve addict and it reminds us of our own experiences.

I actually have my shopping cart full on Drillman1`s ebay page. I was talking to Natalie there about shipping .I never thought of adding tapered bits tho. I might add some .

Can I ask a quick question about UGS?
I moved the bit to my work piece zero with the v bit just touching the workpiece with the " machine control" and then sent the g code.
Should I have pressed " reset zero " in machine controls before sending the g code? or was it the post script header in f engrave that drove the bit into the workpiece?

Thank you for your kind words of encouragement.

Yes you should have pressed reset zero. Always look at the Work Position on the lefthand side. You should look into getting a z-probe for vcarve work.

Are you using the Classic version of UGS or UGS Platform?

Thanks @ChrisRice. I have a z probe already, I just wasn’t sure how to use it with ugs. I only used it for the first time in Easel last night.

@RayMacke I’m not sure if its the platform or classic. I seen version 1.09 from 2015 up in the top corner. I have a look again when I get out of work . Is there much of a difference ?

Yes there’s a difference. 1.0.9 is older and doesn’t support GRBL v1.1 so if you upgraded firmware through Easel that might be part of the problem.

Platform is a “next gen” interface and only available as an “in development” build.

UGS is not as beginner friendly as Easel and requires more advanced knowledge, there’s no prompts for probing or home position or probing or turning on the spindle.

Remember that Easel can import Gcode so you might want to try that before UGS.

Thanks Justin. I’m not sure what version grbl I have. I haven’t touched it since i installed the easel drivers.
I tried loading the g code through easel first but a g code error popped up so I tried ugs…
I’d like to learn ugs as soon as possible as I want to use f engrave and set up bump stops and g28 but I know what your saying. I need to take baby steps first.

I personally much prefer “Platform”. For me the layout is just more intuitive and configurable to suit your taste. Also, “visualization” has a wire mesh of the top surface which I feel makes it easier to understand what is going on. It also has a probe module that works very well and has the override controls to speed up or slow down the feed speed on the fly.

It has been a while since I have used “Classic” and it may now have some of these features but I just took a quick look and to me the interface is still a little clunky compared to Platform.

They both are free and can co exist on the same system so I suggest downloading platform and giving it a try. Every once in a while there is a quirk here and there but nothing that has ever caused a problem once the carve has started.

Thanks @RayMacke . I will give that a try later. Is there only one version/build or is there one I should look out for?

Is there only one version/build or is there one I should look out for?

Like the Classic version there is a nightly build and a “somewhat more stable” build available. I suggest the nightly builds (listed first on their web page) as there are features functioning on it that weren’t working in the July 28 build.

This is exactly why I spent on Picsender. Just got sick of the every now and thens

For me these have been minor and not really a reason to move elsewhere. Right now I am running a version about 10 days old. The only problem I have had with it is with the Probe Module. You can set the distance you want it to retract after the probe in the “settings”. But because of a bug it is adding the Probe Distance you can set in the Z settings to the retract distance. So if you have it set to retract 15mm and have the probe distance set to 25mm it will actually retract 40mm.

Still works fine but if you have a thick work piece you may top out your Z axis. The easy solution is just reduce one or both distances to stay within your limit. It maybe fixed by now but I haven’t taken the time to check.

Just had a look at picsender. I was expecting it to be mad money. $25 aint bad at all. I might download the demo and have a play with it.

I find it hard enough without factoring in z probes lol

I find it hard enough without factoring in z probes lol

There is really no factoring in - I just set set both numbers to 10mm and forget it. As long as you don’t get carried away with large numbers and cause it to top out it works perfectly. There is at least 20 things in Easel that bother me more than this but I still use it.

BTW - I submitted a bug report and within 3 hrs Winder (UGS developer) checked it and has indeed marked it as a bug. He stated the Probe Retract distance should be added to the touch plate thickness - not the Probe Distance. I assume it will be fixed shortly.

Cool. I suppose its just a case of getting use to it. I just have to get the christmas shopping out of the way and then I can get a few days to play around with it. I have only carved a couple of things through easel since I built the x carve:frowning: I’ll have to make more time and start getting a few more carves under my belt. I’ll download platform tomorrow and try suss it out

The only problem I have had with it is with the Probe Module.

Just want to update this. As of 12/17/17 the problem listed with UGS in the post above have been resolved. The Probe Module now behaves as expected with the entered retract distance now added to the Touch Plate thickness.