Last night I was working on a job and after messing it up twice I called it a night and shutdown the shop. I turned off the power to the shed before turning off the power supply (first time ever doing this). I’m not setup again this morning to try and finish my carve, but now Easel won’t light up with a green CARVE button and when I try UGS it just gives me the below error. Did not properly turning off my power supply mess up my GRBL or something?

EDIT: Thought my problem was fixed, but having carving issues now

Most likely what occurred is that the computer didn’t close out the serial port properly when the device disappeared. At some point the OS resolved the issue and cleaned up the serial port status.

If this is really what happened and it happens again you can clear a situation like this by disabling the port in question and then re-enable it. Should clear it up.

I may have spoken too soon. Now that it’s hooked up I was trying to cut a circle, so I did a 0.015" pass just to make sure it’d fit on my piece of wood. In this video, if you notice at 11oclock and 7oclock, it does a stair step “juke”. Is this GRBL being mad at me?

I tried rebooting my computer and ran 3 more test carves the same as above. Only the first of the 3 did the circle correctly. The other 2 did stair steps…

I can at least use UGS now. These are GRBL settings: 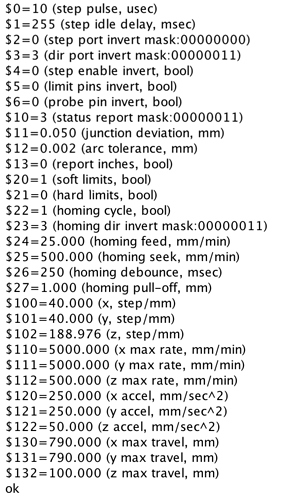 Is it just pausing, or is it getting off of the correct path?

I have seen pausing before.

it completes the job. just does those little jumps/stair steps

If the carve is working right, it could pause occasionally while the software interface catches up. However, if it’s not carving right then you may have a mechanical problem or an Easel problem. The fact that it worked once out of three would point more to a mechanical problem.

Inventables has said more than once that the internet connection is not used during a cut, so keep digging.

put the XC in timeout for a few hours. just tested it and it worked fine… hmmmm o well

I had the same jumping issue. Believe it or not, I had a pulley screw back out on me. Couldn’t find the M3 screw anywhere locally until my last resort was a call to HobbyTown USA and behold, they had them. I bought all 3 packs of 3 he had in stock. I used Blue LocTite and haven’t had a problem since.

I checked all belts and wheels, but did not check those tiny pulley screws. Wish there was a way to really snug them down. Maybe I’ll just try the LocTite route. Thanks!

The blue loctite keeps them snug but it removeable if needed.

I replaced one set screw in each pulley with an 8mm long set screw. It protrudes from the side on the pulley collar about 1.5 mm and gives a visual indication it’s still there and not backing out.