Would use a two stage carve with a larger bit on the roughing pass.

I have just used the defaults. So far had very good results from eyeballing the rezero. But maybe I have been lucky. And haven’t tried anything as large as your project.

When I 0 the Z axis, I do it by putting a piece of wax paper (the backing from the carpet tape I use generally works out perfectly) under the bit and dropping it down until there’s enough drag that the paper starts to catch. It’s a trial-and-error learn-by-feel kind of thing. I do that for both bits and it works out pretty well. You just have to be mindful if you’re doing a 2 stage cut that the walls of your pockets or islands aren’t taller than the cutting depth on your smallest bit.

By cutting depth I mean the distance from the tip of the bit to where the shoulder starts to flare out to the diameter of the shank. Most very small diameter bits have a short cutting depth as well.

I don’t know what you mean by “material to remove” menu. I don’t see that anywhere.

I don’t think that’s there anymore. When they moved the detail bit into the top menu bar all I get is the option to select the bit size. There’s no other configuration there.

AH! Standby, let me bounce down to the computer the X-Carve is actually connected to…

Here’s what I get: 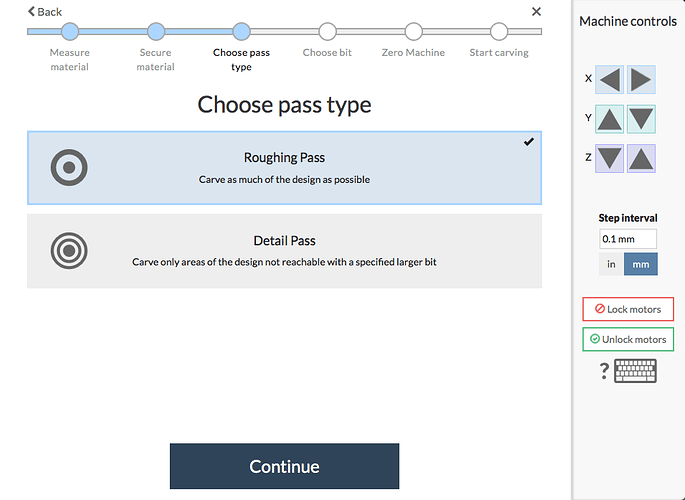 There are no real “options” per se. Just the opportunity to cut the passes out of order.

I can get all the way to the actual carve step. There’s no other options there.

nice work for a crazy person

Don’t worry about the crack, we don’t see it. That is nice looking sign. Great.