This is a mount for a dust collector system for the x-carve. It holds a 3/4" PVC pipe next to the spindle mount. Attach it to the side with a couple of M4x10mm socket head screws. After that, whether you use the PVC pipe to mount a dust shoe or...

It holds a 3/4" PVC pipe parallel with the spindle and you can throw a vacuum hose on top to provide suction.

On the bottom end you can place some flexible tubing or a dust shoe. When I’m back home in a couple of weeks I plan to create a 3D printable dust shoe to go with this.

Printing this out tonight in prep for my x-carve

I just printed the lower 12mm, and, it seems like it will be fine.

As promised, here is the dust boot design:

This is an experimental dust boot for the X-Carve CNC. The brush strip is from McMaster Carr: http://www.mcmaster.com/#7900t5/=yfh5aq 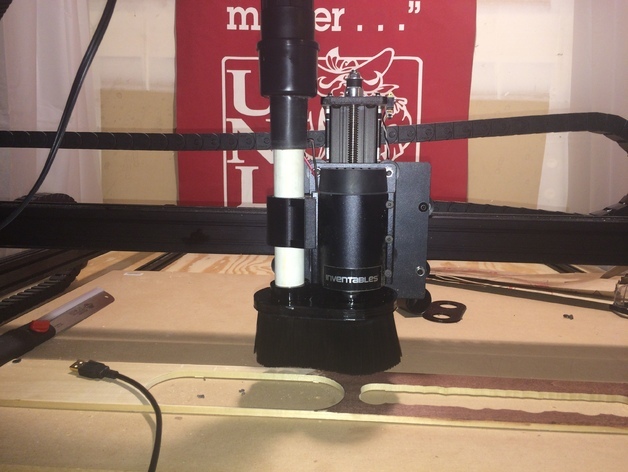 I haven’t had a chance to try it out yet, and it’ll be another week before I can, so build out at your own risk.

I’ve already noticed that the spindle side is a little wide and can bump against the z-screw if you don’t look out for it. That’s something that will be tweaked in the next version.

You’ll need some strip brush material and a PVC pipe. I used this from McMaster: http://www.mcmaster.com/#7900t5/=xilsl2 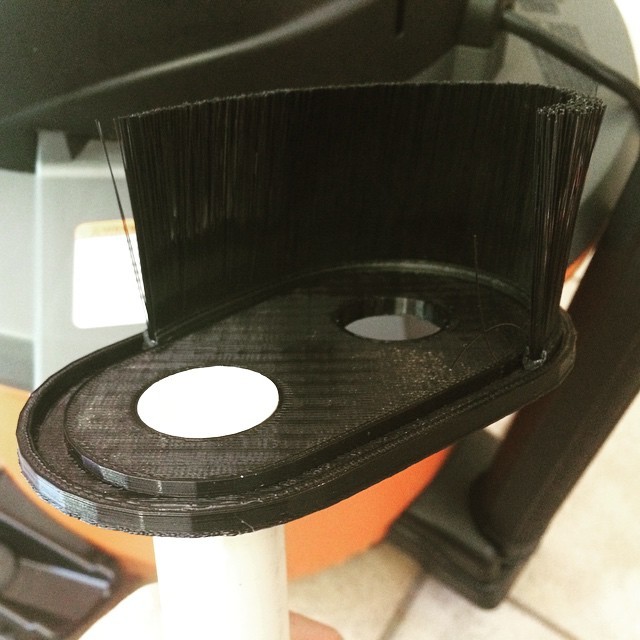 Dumb question alert (but I’m viewing this on my phone), is the design 3d printed or cut out using the machine itself?

As soon as I finish bashing my machine with a hammer and yelling at it (euphemistically what I’m calling “tuning it”), This, or something very near to it, will soon be turning into x,y and z numbers.

Once I’d gotten over how impressed I was that I’d put it together and it worked, I was then really impressed at how efficiently it was able to spread plastic chips, MDF dust (nasty stuff btw) and general swarf, all over the place.

That one is 3D printed but you could make the same thing out of some delrin with the x-carve.

Hmmm, Just thinking out load here, would a dust shoe make a good “hello world” project to suggest to newbies. The circles have a fairly tight tolerance, and it has straight lines too. Maybe suggest doing a test cut in wood first, and then once it is fine tuned in delrin. Inventables could even stock the suggested material, have a link to an Easel project for it, and sell it as an add on intended for a first or second project. Just a thought.

I have bought the gear for the link line vacuum attachments mentioned around here, and plan on trying that first, but if that doesn’t go as planned, a dust shoe would be my next choice.

Correct - you should be able to carve the bottom bit out of delrin without problems. The part that holds the PVC pipe on might need some modification or hand processing though.

Here’s a couple of videos I took of it in action. Seems to work OK, but it’s a little annoying not be able to see what’s being cut. I might try clear plastic ‘bristles’ next time.

I rigged up a Loc-line vacuum attachment this weekend, but I’m not impressed. Most of the chips don’t get sucked in. You need something to catch and hold them, like this dust shoe. I plan to make the top out of clear plastic of some sort to aid in viewing.

I started with a loc-line attachment and didn’t like it either. That said, it worked really well when I attached the hose to the other end of my shop vac and it went from suck to blow. If you don’t mind the mess, it might be an option.

Just ordered my X-Carve two days ago, so I still have a little time between receiving it and set up, but I get a little anxious and start trying to resolve issues before they happen. The dust is something I don’t want to have to deal with or have ruin a project. I’m not too crazy about the loc-line setup and being that the response seems 50/50 from those who have tried it I decided to whip up something I’d like to use.

As stated, no X-Carve at my home yet, so I had to go off of guess-timations for the spindle depth and referenced all other measurements from the Inventable’s PDF’s ( Thanks for those! Very helpful ). I’ll be printing this out tonight and let it sit until my machine is setup. If all works out I’ll post up the G-Code. I went with 1/2 PVC .840 for the suction tube. I still need to figure out the clamp spacing. No rush though.

What are the units on your .stl file? I opened it in AutoDesk Inventor and the size was all messed up. The part looked fine, but the dimensions were not correct. I assume the holes should be about 0.75 inches.

I prepared fixed dust collection instead of moving along z axis.

Just got my 611 mounting and 3d printing some ring adapter for Makita Compact Router that I was using for shapeoko2. The makita is smaller than dewalt 611.

I also dont like not seeing the bit while cutting, this one I can see clearly. I’ve been using this approach from my shapeoko 2 and its result is really good. Small footprint and can run even on the lowest suction setting on my vacuum 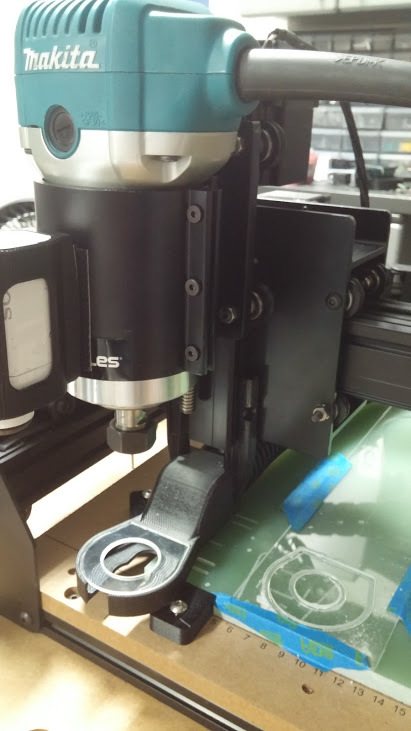 That looks great and exactly like the kind of dust collector I’ve been looking for! I look forward to the stl upload. Thanks for sharing!

I drew up something similar, but it was 4 hours to print with supports.

Wow- that’s beautiful. I’d absolutely go with something like this. Chip collection and able to view the piece/bit. I don’t have access to a 3D printer, so I’d either have to modify the design to be machined in pieces on the x carve or use a 3D printing service to have it made.

Almost no dust. Love it. 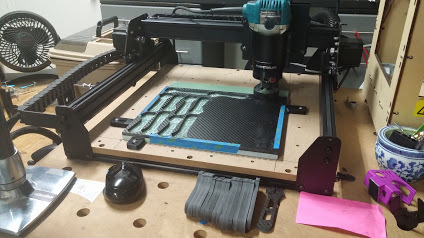