I’m really banging my head against the wall here.

I need to go from Sketchup to Easel. There’s no point in using either (and CNC) if I can’t have confidence in the measurements.

My sketchup file is in inches. The file is absolutely flat. I exported in 2d, DXF, and then imported into Eael with the DXF import tool.

The notion that I should have to create a rectangle and check everything on every import seems crazy to me.

Surely there is a way to get an accurate file from one program to another.

Easel product managers, this is a dead breaker for me (and probably for ~20% of your community.

Solid woodworkers do not want to create their files in Easel–it’s easy but not nearly robust enough for woodworking design. Many of us are legacy users of Sketchup.

Please help me out here.

Note: one thing that could be a source of error is that DWF import asks about the path inside, on, or outside, which seems redundant to the cutting settings elsewhere.

However, with a 1/8" bit, this would not be adding as much error as I am seeing.

Are we selecting full scale? 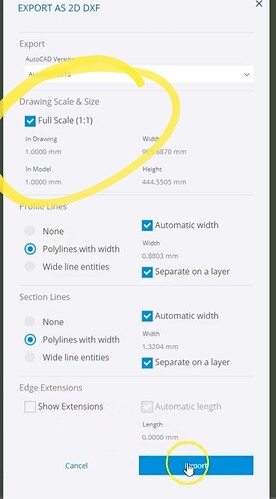 Thanks for the note.

In my export option, I don’t have the 1:1 option available.

I saw that, but assumed that the latest version would be necessary. 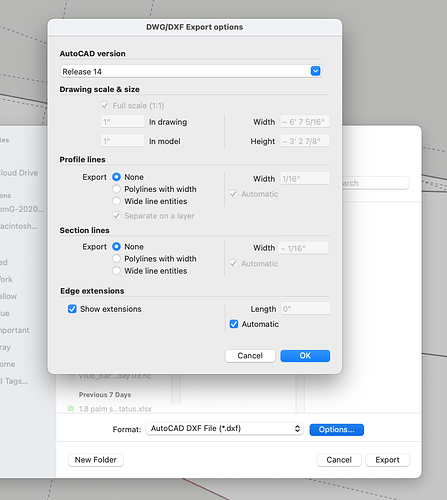 I see… well, you kinda do have a scale 1:1 option, but it’s already checked and greyed out… It’s already checked because of the Autocad Version Release 14 being selected… I’m not sure if this has to do with the issue with scaling or not, but I bet that no matter what program (other than AutoCAD) that it’s imported into, it won’t be the correct scale… because the exported file is being configured specifically for AutoCAD Release 14.

If there is a different option (in the Format section of the screen behind that photo) for maybe a simple DXF or even SVG. That might fix the issue, unfortunately I only have the free version of sketchup and can’t replicate the issue since it won’t let me export like that on with free version.

I’ve seen others experiencing as similar issue exporting from Adobe Illustrator and Procreate for mac… BUT the issue was always resolved by altering the method used to save the file, the scaling was off no matter what other program was used to open it… Whether they opened it in Easel, or Vcarve, or Fusion360, the scale was off until they found the right save settings in their initial software, that’s why I’m inclined to believe that It’s also the export settings in Sketchup that’s causing your current issues.