I love easel, for the most part, but there are some glaring issues that I have run into. On Larger projects, it will refuse to generate paths. I am trying to generate paths to see how some game tiles will turn out, but it refuses to generate. http://i.imgur.com/5muBM2U.png

Could you share the Easel link on here for those of us on the forum to see if we can help?

Thanks! I’ll take a look and see if anything sticks out to me, but from the pic you posted, it doesn’t look like it should be hanging… I’ve had much more on the work area before and Easle handled it fine.

Is this all generated in Easel or is it imported from an SVG?

If it is an SVG then can you share that?

It is imported from a SVG, but the SVG only has 1 of each tile.

Looks like the dots won’t carve due to being too small. Will you be using a smaller bit than 0.0625" for those?

I’m going through your SVG to see if there are any paths that might look odd to Easel. After that I’ll post back and let you know the progress.

Should I make the depths for the dots deeper so you can see them more clearly on Black on White HDPE or do you think the current size is clear enough?

it depends on how deep your Black on the HDPE is, you’ll have to measure and experiment with that.

I can see why Easel is getting bogged down. After setting up the SVG file like the Easel file and then trying to import it, it shows that there are 1396 objects, and on top of that,many of them have tabs turned on. After importing the tweaked SVG and turning tabs off I was able to get it to generate the tool paths even though it skipped the ones that were too small for the .0625 bit.

Here is a link to the Easel file:
http://easel.inventables.com/projects/dv0J9XFI9Cg10fHV2CN6vA

And here is the SVG that I tweaked:

here is another pic of the tool paths after changing to bit to .03125

Edit: BTW… for stuff like this I would definitely not use tabs. Just use double sided tape strips across the underside of the HDPE to hold all of the pieces down while they are being cut.

Edit2: you will also maybe want to tweak the corners on the pieces themselves because they won’t fit well together as they are… you’ll want to put a slight rounding on the outer corners to fit the rounded inner corners…

Do you mean something like this? They don’t have to fit tightly together, the puzzle piece “tabs” are only meant to keep them from falling apart due to lateral movement. 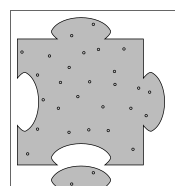 or is this a better version of the tabs? 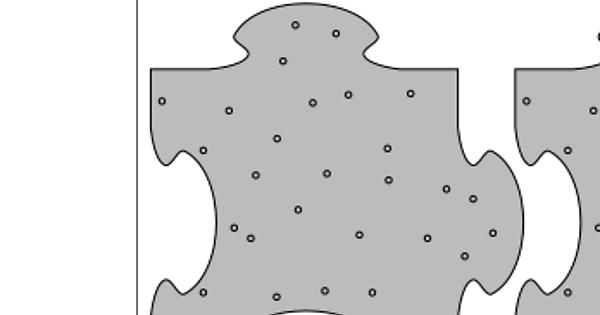 The second one you have there will accommodate the round cut shape of the bit, so I’d go with that.

As a bonus, I personally think that the shape is more interesting.