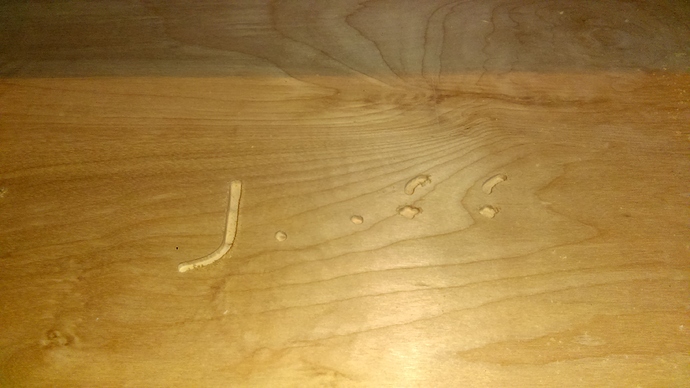 Hi everything was working well but now my xcarve can’t cut accurately. See the attached photo, that is my name from the test easel cut. I have tried reflashing arduino, reinstalling easel driver, checked belts which seem same as before, not very tight but worked previously, changed the bit, swapped arduino, and visually inspected the machine for anything I can see wrong. Any advice?

Suggest writing out the G-code and previewing it — looks as if the endmill is too large for too thin lines.

That may be the same bit you’ve used before, but is it the same font at the same size? It looks like a bit size issue to me, and I know some Easel fonts don’t play well with the 1/8" (or even 1/16") bits if they are less than 2" tall.

Hi, yes, the issue with that was indeed the bit! But the reason I was running text carve was my original problem: That when cutting say a circle, the circle will be really long on the x axis. I went thru a bunch of steps, no improvement, then tried tightening all my belts, and now the small 2 inch test circle has huge x axis, almost whole workspace? So that is my real question, why would be cuts be skewing wrong on the x axis? I have tried checking wiring, reinstalling drivers, ugs sender, arduino flash,could it be the x axis motor?>

That sounds like a different issue, but maybe we got your text issue solved.

I don’t understand why the spindle would be running all the way across the workspace on the X axis. It could be due to improper stepper calibration ($100 and $101 should be about 40, unless you have non-standard steppers). There is a jumper on the G-shield or Arduino that control the number of microsteps, but I think the jumper controls ALL of the steppers. Is this true @LarryM?

As for the Y axis, it sounds like you’re not getting enough power to your Y steppers if the Y axis is not reaching 2". That implies lost steps, which is commonly due to overly tight/loose belts, loose pulley screws, tight V-wheels, and/or improper pot settings. I would start by inspecting the pulley screws (tight and centered in flat on shaft), then loosening all the X and Y V-wheels all the way and trying again. Follow that up with a pot check and a stepper motor calibration. Then I would move on to loosening the belts a little at a time until you get the proper size circle. If the problem gets worse, then tighten the belts a little. Once you get the best circle, tighten your V-wheels up.

I don’t use UGS, but I would suggest using Easel to set up a couple of test shapes. That way the G-code will be created by the same program that’s running the X-Carve and you won’t have the possibility of a corrupt or incorrect G-code file being passed between programs.

There is a jumper on the G-shield or Arduino that control the number of microsteps, but I think the jumper controls ALL of the steppers. Is this true

There is a jumper for each axis. The normal Inventables build uses 2x for Z which is one jumper on the Z axis and 8x for the X and Y axes. No jumper on X and Y. 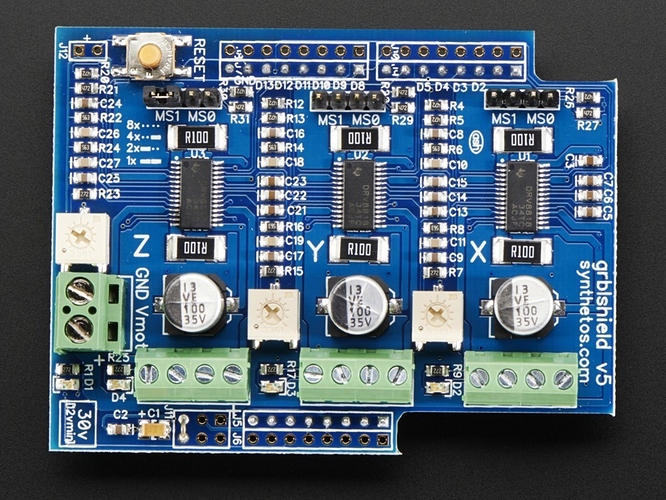 Continuing the discussion from Easel or xcarve problem?:

the x and y are at 40. i didn’t change the jumpers so they are still same

since the problem got even worse after tightening belts I checked pulleys just now, then loosened the belt

again, the really odd noticeable difference is when I move on the x axis it is really herky jerky, not smooth like normal, but abruptly jumps to new position if that tells you anything?

so best I can describe, the problem doesn’t seem to be LOSING steps on the x axis, but taking too many. pushing the arrows in easel for y axis moves the spindle smoothly and normal distance. pushing x arrow moves the machine much farther and at high speed, does this signify anything?

To test the driver chips on the gShield ->

Hi, thanks that found the problem. But now I have the new ghshield connected and I can’t move any axis with easel or grbl. I have rechecked my wiring, I have each x axis with from left to right black>green>white>red, and i moved two sets of power wires from old gshield to new. I don’t have limit switches. I have reseated gshield on arduino. I have tried two computers as well. I can’t seem to reflash any arduino though as it fails that file is too big

Are you compiling from source, or loading a hex file? Versions of the Arduino IDE beyond 1.6.8 (I think that’s it) have a problem compiling the grbl code. There is a fix if that is your problem.

Inventables Fork of grbl too large 32,266 bytes when compiled Troubleshooting

@GeoffEvans @EricDobroveanu I down rev'd Arduino AVR Boards to 1.6.11 and it did fix the problem on my machine. Thanks, Geoff Opened issue at https://github.com/arduino/Arduino/issues