OK, I got to be missing something (sort of brain dead today). When carving this project the rough cut seems to go fine but the detail V Bit cut is not doing what I expected.There are areas that are only having the outline cut not the fill. I marked a few in the photo but there are more. Got to be a setting I have wrong somewhere but I can’t figure it out this morning. Maybe more caffeine is the answer…

BTW- When using a custom non-listed V bit the “width” requested I assume is the TIP width not the bit diameter. Was looking for the video done to introduce the Pro version with V carving but can’t find it. Is there a single location where all Inventables training videos are listed? 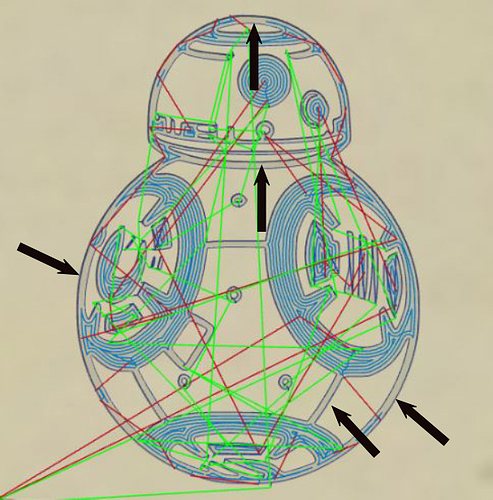 I think you need to put the cutter diameter at the top of the V and not the tip. I believe that is the value used for tool path calculations.

I would think if they wanted the diameter they would ask for it not width but what do I know! BUT I tried changing it from .012 (tip) to .125 (diameter) and could not see any difference in the toolpaths - which I think is odd.

Easel probably doesn’t have a pictograph like Vcarve does (would be nice if they did) so it’s not known.

Sorry about the confusion. I think I should have been more clear that this is in Easel Pro.

I have this set as a two stage carve with an 1/16" bit for roughing and a 30 degree v bit set with a 1% step over for the detail. In Easel Pro’s v bit setting I set the “width” to the bits tip flat size of .012. When it makes the detail cut it only seems to cut an outline not the fill. The detailed preview shows it should be cut although the tool paths don’t agree. Also, cut depth is set to .02".

The detail pass does not seem to recognize the fill cut. I’m stumped.

I think your overall outline might be affecting it on the first workpiece.

Instead of zero depth cutting it, try deleting it to see if that matters.

When I changed your Vbit size, it increased the white outline on the outside so I think that is what you’re seeing causing no cuts.