So I got my xcarve up and running again after a long hiatus and see Easel has new features and such. I’m back to my sign making for acrylic light up signs. However when I import from from vcarve and I paste it in the middle of the job to perhaps clear the bit off or whatever the case may be. It will go again for about 2 seconds then stop again. Any ideas? If I don’t stop it will go all the way thru and it happens everytime and doesn’t matter what sign or where I stop at it does it. I use the gcode on another cnc machine and it goes thru all the way whether I pause it or not

It turns out that it was seeing RF noise on the limit switch lines and doing an emergency shutdown.
I reconfigured my settings so the switches were “homing only” and the problem stopped.

why do you import to easel from v-carve? your talking about v-carve by vectric correct?

That worked for now thank you

Because vcarve by vectric is a much better program than easel. Easel is great for the basics of cnc and xcarve. Vcarve is much better suited for me and I might as well use it since I have it.

yeah but you create the design in V-carve and then import it into easel to cut it correct?

of course Mach3 controller would be best

I have found ugs to be unreliable for me. and I don’t know much about chillipepper or mach 3

yeah I have had issues with ugs in the past

I hear good things with chilipepper but have never used it

all imo though lol

right I do create my tool paths and gcode in vcarve and just import all easel does is just control the machine that’s all. it just happened to stop working if I press pause that’s all. its my dream to eventually have a 4x8 machine then again I’m about to take everything out on the road with me and see how well I do at trade shows. I have a smaller 12x13 that I bring with me that sets up outside

oh thats cool do you have a pic of your lil tiny machine? 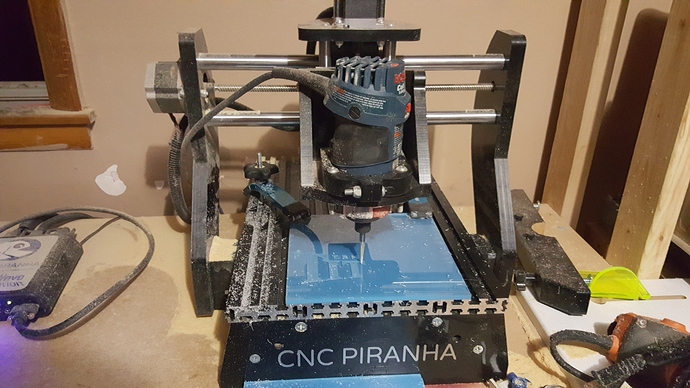 dang that sucker is expensive!!

well what control software does that thing use?

oh so you just plug a usb thumb stick into it and hit go on the .tap file?

it also came with vcarve desktop at no additional charge