Hopefully I’m in the right place with this one.

I created a job, basically a sign that’s V-carved with a 90. Bit and sent of to cut. I’m amazed at the paths Easel is taking, the movements are all over the place and I would guess the job which took approx. 55 mins could have been done in 30 mins but for for the bizarrely weird way it’s being cut. I watched a 4” line take forever because the mill once it cut left to right navigate back to the beginning of the line and travel the path again until it was cut to 6mm deep. Why doesn’t it cut on the way back? It would do mad things like cut a letter at top of job and travel all the way back to the bottom to cut a letter there?? Is this normal? Should I be learning to use vectric and v-carve? Would that do a better job? I’m spending money on easel subscriptions so should I save and move onto vectric? Thanks in anticipation. 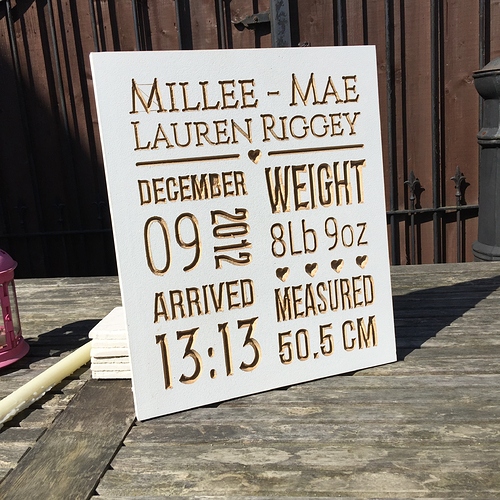 B. The toolpathing you describe is normal. Not sure how much better other programs are at optimizing.

My experience has been that V-Carve generates gcode which is more efficient than Easel’s.

I think a test is in order! Will report back as soon as I have time.

It would indeed be interesting to see same carve. same settings, different results.

Climb Milling vs. Conventional Milling - In The Loupe

There are two distinct ways to cut materials when milling: Conventional Milling (Up) and Climb Milling (Down).

So when Easel goes back and forth all over the design randomly cutting the design is that conventional or climb?

Would be great to get some tests, I used to write optimisation software for glass cutting tables and the idea that the cutter spent 60% of its time travelling when it could make a cut would have been disastrous for the business. I just find it really strange to see the router moving around and doing nothing when it could be making less work and increase throughout on the job. But like others have said, maybe this is down to setup, software and configuration.

That was a good read, I’m more informed thanks to that link.