hey i’ve been having this issue after not having used my machine in a few months. when i start a new file its around 11.25 x 11.25. even after changing it to the size of the bed it stays in the smaller work area. i’ve updated firefox and chrome, still happens in both, ive restarted computer afterwards. i redownloaded the newest version of easel, still happens. even opening old files that were sized correctly don’t work, and when i import svgs that are larger it asks if i want to resize them to fit the working area. also if i zoom in it only will show me whats in the work area, ie i cant scroll out past that to see an area of the image that is in the stupid small square.I’m a bit frustrated since everything was working fine before i got slammed on another project in sept and now that i have time to get back to it there’s a new issue to work out. is this happening to anyone else? i am so about to just go buy xmas presents instead of making them.

oh specifics - 1000x1000 bed, dewalt 611, running on an older macbook (although i usually design on a newer one because its faster and not dusty). usually use firefox, but when i had issues over the summer sometimes i’d switch to chrome, but overall havent had any major easel issues (had some mechanical ones early on but all that is squared away by now)

i tried doing a search around the forum but couldn’t find anything relating to this and am about to go through thread by thread. nothing has changed on my end in work flow since the begining of fall and i know there are alot of new other bells and whistles now that i didnt see when i was last using it so i’m assuming its on the program’s end.

heres a screen shot (i hope this loads i just dragged into the text box. let me know if i need to load in another way 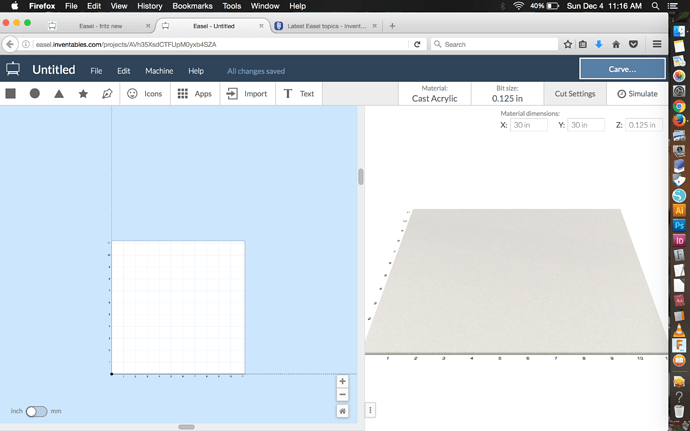 11.25 inch is around 300mm which is about the workable area of a 500x500mm machine. I would try going through machine setup again and telling it you have a 1K by 1K machine.

the toggling between inches and mm was what got it to stick. Thanks! i kept trying to just enter it in and it was not liking it till i did that step, everything is back up and running again!