I’ve been running in to this annoying problem recently and thought I’d seek some advice here. A photo better describes it:

I call these “fuzzies,” and I haven’t quite figured out if I’m running my feed rate too fast, if it’s the material, or if it’s my router bit. It can happen on any type of wood, but it’s most pronounced when I’m carving plywood and least noticeable on soft woods. It always happens on the left edges of a carving and usually occurs during the finishing path. It’s not a huge problem and it doesn’t typically ruin carvings, it just leaves me a lot of extra handwork with sandpaper that I’d prefer to avoid if there’s an easy way to do it. Here’s the info I used for the carving in the above photo:

One thing people may notice is that my feedrates are a bit slow by most of the calculators I’ve found. I’ve tried to run faster feeds but then I’ve started to have problems with losing steps the more I go above 2000 mm/min. The only way I’ve found to mostly eliminate this problem is by carving my finishing path with “cut x then y” in my Meshcam settings (most of the time I run it as “carve x only”). But the Meshcam experts say this shouldn’t be necessary with most carvings and plus, it obviously doubles my work time.

Maybe my bits are getting worn out, maybe it’s just crappy wood I’m using. I’m sure there must be an easy answer

Plywood is a really difficult material for 3D carving, the top edge tends to chip out badly and there are often voids in the material that will really mess up your project.

The fuzzies in your picture look like your bit is pushing the wood fibers around instead of cutting them. That may be due to a really dull tool.

I would recommend that you get a cheap peice of select pine or poplar, a new bit and try again. For the really small diameter tools like the 1/32 ballnose you will need to increase the spindle RMP to a setting of 2 or 3 (depending on your feedrate)

Thanks for the advice, Allen. Perhaps it is time to get some new bits to see if that’s the problem. But damn, the ones I’m currently using were very expensive and I’ve only been using them for about 3 months and always on wood. I’ll try to increase the RPMs with those smaller bits as well and see what that does for me.

When you first started using those tools did you run them at very high RPM’s so they got very hot? Heat can damage the tool quickly.

No, not that I recall. I’ve basically never increased my Dewalt setting over “1” the entire time I’ve owned my x-carve. The one mistake I did make through the first couple of carvings, however, was running my feedrates way too slow. But that mistake was made with the bits that came with the x-carve.

this can be caused during climb milling.

Yes, for surfaces. In the photo, it looks like your fuzzies are only and the left of an edge cut.

I haven’t quite figured out if I’m running my feed rate too fast, if it’s the material, or if it’s my router bit

Material, bit and cutting strategy all paly a part in this.
On trick I saw someone use to clean up the fuzzes on a 3D carve was to do a second finishing pass but aligned on the other axis. The specifics depend on your cam program. But for example with VCarve you have a option to raster carve along the Y axis or X axis.

For basic 2.5 D carves you can try using a downcut bit.

JDM - Indeed. The fuzzies are always on the left side of the edge cut. If I run a second pass on the y axis, I can get rid of most of them, but it doubles the project time.

Have you tries a downcut spiral bit? Using one made a big difference to my plywood cuts.

Do you have super-crazy detail? You can do some pretty impressive 3D with 1/8 ball nose.

Very good question. I guess I should have elaborated. I would of course never use plywood if I was carving a 3D model I planned to keep in wood. However, much of my 3D carving is done to make wood models for use in sandcasting bronze plaques or sculptures. I don’t need very thick material to make these wood models (3 mm thickness is plenty). Most of the solid wood I can find at my local hardware store is 3/4" thick at minimum. Perhaps I might be able to find some 1/2" if I looked around hard. That’s an awful lot of wood to carve (and waste) to get down to my 3 mm thick model at the bottom. However, with plywood I can easily find thicknesses of 1/8, 1/4, or 3/8". It’s a lot faster, a lot less waste, and the resulting models are perfect for sandcasting.

Occasionally I do. I’m often doing 3D carvings of people’s faces, which typically requires the highest detail possible. But I definitely try to use the largest bits possible for the detail I’m trying to capture.

Have you tried using MDF for the mold, you can get it in 1/4 and 1/2 inch thickness and it carves much better than plywood and is also less expensive

I do use MDF for some things, but the thinnest MDF I can find at the local hardware store is just over 5/8". Might have to see if I can special order some of the thinner stuff.

Do you have a Home Depot or Lowes near you?

Indeed. I spend a lot of money at Home Depot as well.

However, my Home Depot doesn’t carry any MDF under 5/8" that I’ve ever seen. They actually have a very limited selection of MDF, unless they keep other sizes in different parts of the store. We also have a Lowe’s, but I’ve never checked there because it’s a farther drive. 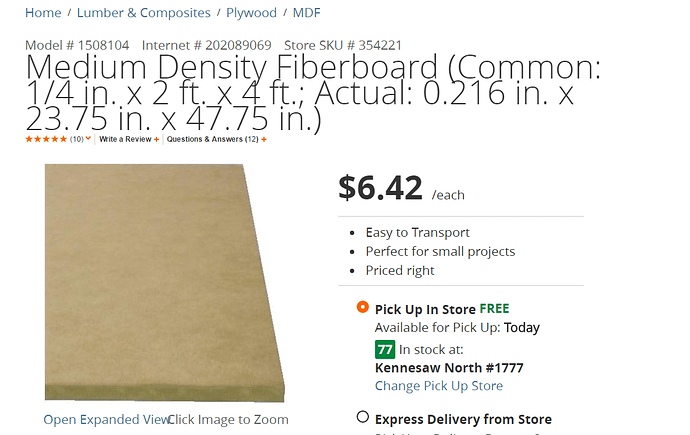 I have not had good results 3d carving plywood. Chipping and delaminating at the layers. You might want to consider investing in a plainer so you can use solid wood, cutting the thicker planks down?

I use cedar fence planks a lot for 3D carving Tiki faces (I love the color). They are cheep and very soft so you can cut faster. But they are rough, green and bow when dried. I have learned to adjust, letting them dry for a week or so before using, choosing my z zero point carefully. I plan on picking up a planer to give them a flat side and a consistent thickness.