With successfully creating elliptical rings (see this post: How to draw an ellipse within an ellipse?), I plan to use them as inlays. Basically, it is an elliptical inlay with an elliptical hole in the middle. So, the “pocket” should also have a hole in the middle - I don’t want the bit to rout out the middle section that won’t be used anyways. The elliptical “rings” are 5/16" wide, so the dado ledge of the “pocket” should also be 5/16" wide. I can’t figure out how to make Easel do this.

I was able to create a DWG in a CAD program, and using an online converter (“CloudConvert”), I was able to get an SVG file which did import into Easel. So far, so good. The image came in too small, but I had drawn an 8" x 8" square around it, and was able to set the size, using the input boxes for height and width. I then deleted the square (leaving 2 corner “registration marks.”) The following images will show you how far I got.

I tried selecting the exterior ellipse, to try to use the “offsetter”, but now Easel complains that it cannot import this SVG (strange, because the whole drawing did successfully import.) I have a feeling that if that had worked, I’d be done.

Any ideas are welcomed - even if the smartest thing to do is to find a different converter and start over.

Here’s where I got. You can probably see that I’m getting close. 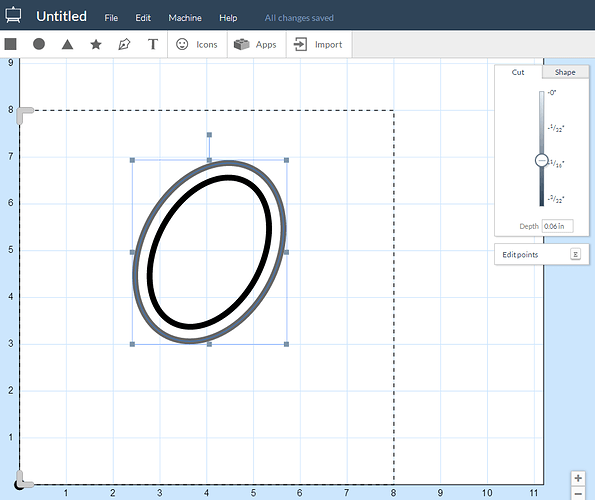 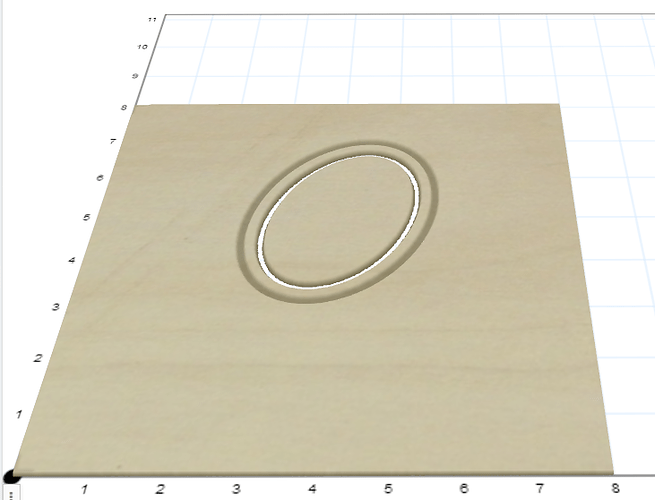 To do this entirely in Easel, I would do the following:

draw two elipses, one the size of the outside ring, the other the size of the inside ring.
Set both as fill/pocket cuts.
Center them to each other.
Make the depth of the smaller one 0.
Select both and combine them.
Make two copies of combined shape.
Position and rotate as needed.

Edit to add:
Cut the result as a fill for the pockets. Copy and paste the rings to another work piece, then “cut outside” or “cut on line” to make the inlays. Here they can be rearranged to suit the inlay stock.

Did you mean that the smaller ellipse would have a depth of cut equal to the board thickness? I tried what you suggested, and at zero depth, it creates a big pocket without a through hole. Setting that inner ellipse to cut full depth does seem to solve this (at least on paper.)

No, the depth of cut for the smaller one needs to be 0", or no cut. That will leave the entire center of the pocket uncut.

The smaller ellipse also needs to be in front of/above the larger one.

Thanks so much for taking the time to help me, Reuben. I’m trying hard not to be a noob (I used to work as a CAD draftsman), but I don’t understand.

I do want a hole cut all the way through the board to be inlaid.

When I set the inner ellipse to be zero depth, the simulation shows zero depth for the entire portion I wanted cut out. (It does correctly contain the bit paths for the shallow “pocket.”) 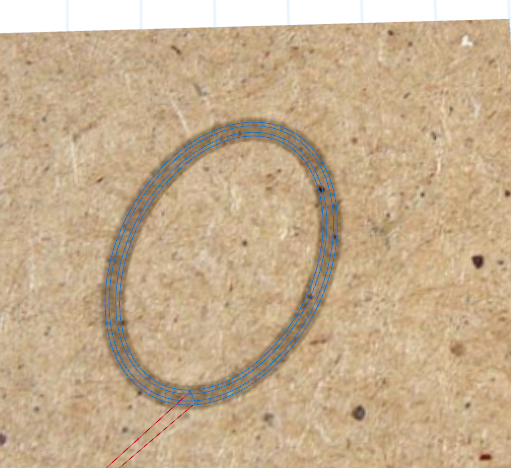 Pocket is correct, but center hole is not cut out.

But if I set the depth of the inner ellipse to the full depth of the board to receive the pocket, it does correctly cut out the central hole - but as you can see, it will also (incorrectly) create a tool path spinning around the center hole. 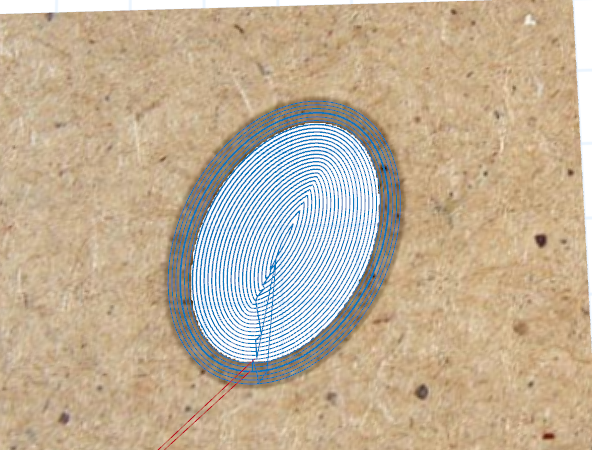 This is what it should look like, but just need to remove all the tool path in the center.

Okay. Add a third ellipse that is the same size as the inner one. Set one inner one to zero depth fill, and the other to full depth and outline - inside. Stack the outline above the zero depth, and both of them above the outer one. It should give you something like this, but with your ellipse: 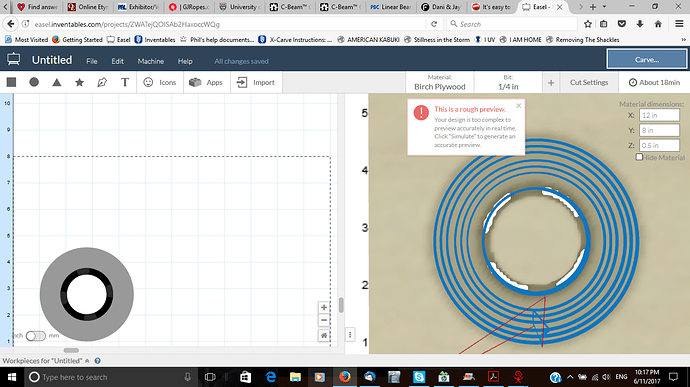 You can use tabs or not, depending on how you are holding the stock down.

Ahhh, that makes sense. That should do it. 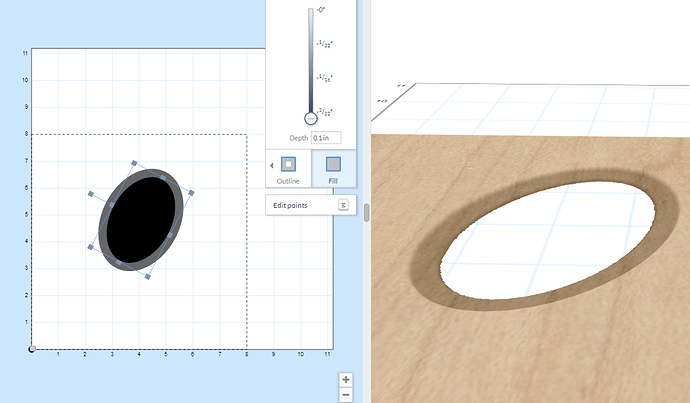 If you leave it as you have it in this post, the machine will remove the whole center as chips, so you won’t have an “island” to worry about coming loose. There will be more machining time, though.

Yes, the tool path as is will take 26 minutes, when in reality it should probably be closer to 1 to 2 minutes.

I’ll start over, but with the knowledge I’ve gained from you. There is no “un-combine” function in Easel, and I may have screwed up on which step I did the combine. Just like inlaying the letter “O” or the number “0”, Easel is capable of creating the correct pocket (with the center undisturbed.) Then, a second ellipse would be cut out of the center (probably wisely using tabs.) I think the key is to create a solid 2D object that is an inside and outside ellipse combined, not just 2 separate concentric elliptical lines. Easel then “extrudes” the solid 2D object into the Z axis.

I’ll keep working on it today.

I tried again, a couple of ways, but I cannot see where Easel is capable of really “connecting” the 2 ellipses into one elliptical ring object. Nor could I get the “offsetter” to do what I want.

The dado ledge is 5/16" wide, which means it cannot be cut with an 1/8" bit in the 2 passes that “offsetter” gives. However, changing the bit to 1/4" does work (although I’m not sure if a 1/4" dia. bit will lose any accuracy. It shouldn’t, but I have been told that 1/8" bits are the “sweet spot” for XCarve machines with a Dewalt 611.) An inner elliptical ring was cloned and placed and aligned (outline, inside) for the hole.

I also decided to give Illustrator another try (I don’t know that program very well), and was able to create a filled “object” and not just 2 separate ellipses. That was saved as SVG Tiny 1.2, and Easel did successfully import that. An inner elliptical ring was cloned and placed and aligned (outline, inside) for the hole.

There is no “un-combine” f

In the apps menu go to explodr.
It will separate things that were joined. Especially if they are distinct shapes.

Thank you, PhantommFangs. Good to know.

Firefox locked-up my computer and I had to end the session, and lost both of the Easel workboards that I just showed. Oh well, I’ll just keep getting faster and faster at re-doing the work from scratch.

and this is the board from which I will cut the inlay (plus 2 extras):

I’m going to try to cut this tomorrow. That is, if the project is actually saved this time.

Final questions are:
1.) what cutting parameters to cut softwoods? (The pocket is in spruce.)

2.) what cutting parameters for my inlay “board” which is a sandwich of veneers and epoxy. Should this be the same as “plastic?”

Depending on stiffness and bit size.
I sometimes push a 1/4" downflute @150ipm@.125"doc
Sometimes faster. But when accuracy is key don’t go too fast and try to use a cleanup pass
When i do a cleanup pass I go usually full doc but a bit slower.

Locate the center of the ellipse to be cut out and put a screw through it. Then you can set the cut for that ellipse to be an outline with no tabs. The up and down plus stops adds time to your carve.

I did run everything without tabs, and decided to try double-stick tape for the rings. That worked well.

I think screwing down the elliptical cutout (on the board to receive the inlay) is a good idea. I’ll do that. That will ensure that the dado/ledge depth will be uniform, as well as holding the piece from flying.

This was the first time I’ve ever even turned on an X-Carve, and of course, my first project is slightly complex. In my test, I used a piece of plywood for a “spoil” board, and did not realize that it was bowed (sorta bubbled up in the middle. So, when I ran my test pocket in test material, the depths were wrong in places, and the center ellipse scrap piece did not get completely cut out. I went back to the same “home” position, lied to Easel and said the material was thicker than it was, and re-ran it. Again, not quite through, so I re-ran it again. After all those passes, the pocket was sloppy - and since this is my first project, I didn’t know if the drawings were correct or not. So, I moved the clamps and secured the spoil board much flatter, and ran just the inlay pocket from the project file - and the rings fit perfectly.

I’ll get a new, flatter spoil board tomorrow, and try one last test pocket, before moving on to the final material (acoustic guitar tops), but it does appear that I’ve got it.

Thanks very much to all of you who reached out to help, and to Inventables and the Easel software developers for the cool tools!

Run a flycutter or a large (1/2" or so) flat router bit to flatten the wasteboard.

Please always state that you have a modified x-carve with screw drives. That really matters when it comes to feeds and speeds.

Absolutely no argument. I was presenting the relationship between stiffness and and possible speeds.
However just as a side note I was in fact doing that speed with a stock xcarve thanks to your help when I first started.
It was so long ago you may not remember!!

As I cut more parts, the next day, and examined them closely (inserted), I can see that the .003" of slop that Easel builds in to the Inlay Generator app could be tightened up a little bit. I’d like to run test parts with .002" and .001" to see how well they fit. Is there any way to make a copy of my Easel project, and change the tolerance setting? Or, do I need to start over to do that? Another thought is just to lie to Easel and say that my .125" bit is really .126" or .127", and carve away.

If the item to be expanded was “filled” or “solid”, I could change the width and height by .001" in the shape inputs, but with a hollow object, the inner ring would be changing in the wrong direction as the outer ring was expanded. I’ll try setting the bit diameter .001" bigger, and see how that works.