I am running my first project which is a series of oval shaped rabbets on a board to hold gun stocks. I am cutting them 10 at a time then sliding the board down to get the remaining as the board is longer than the working area. When I got to the seventh cutout, the machine started to make an error in one corner. As I progressed in the cutting, the error got worse. I did number 10, slid the board down and restarted the run, changed some feed rates and it continued to progressively get worse. By the 12th cut, the machine was making “ghost” passes where it would do a perimeter cut then do a pass where it had previously cut and then go back to the standard pass. Also, the issue in the corner was getting worse. After I was done with board number one, I shut it down for about 30 minutes or so and came back to run a second board. I only got two cutouts(see photo 2) in to the process until it was all scrambled up. Any ideas on what would cause a progressive problem? Would it be overheating? I also wondered if it had to do with my internet connection as I have a weak signal in my shop but I wasn’t sure how Easel downloaded programs. Is it streaming? 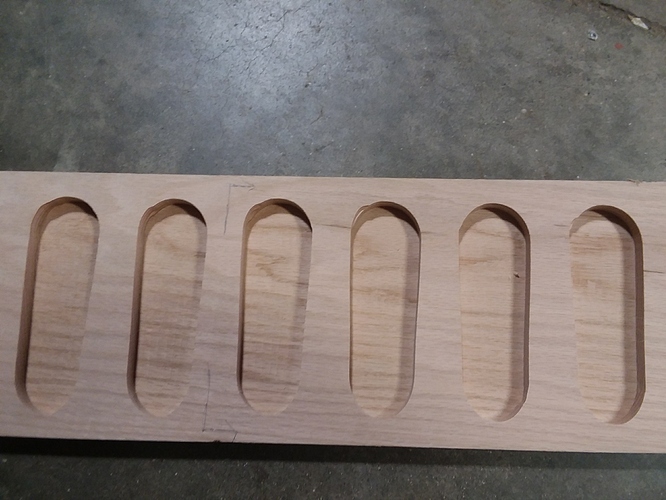 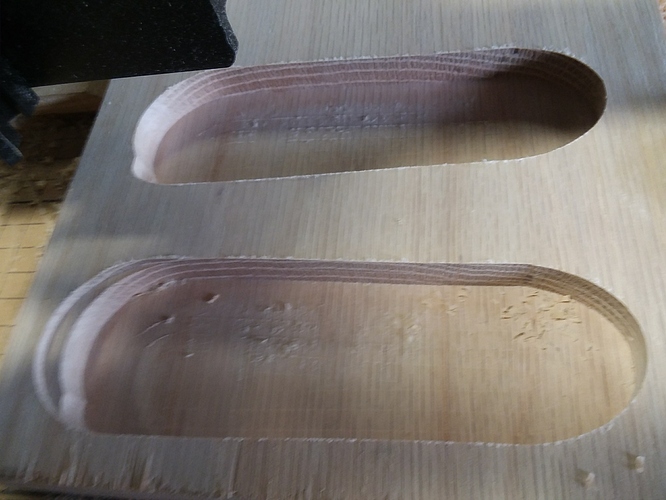 Something is loose. Check the belts first, then v wheels and continue through the machine. It started ok then went bad. It’s not software. its mechanical

You are loosing steps, question is why and its most likely something mechanical as Phillip suggest.

1/2" mortising bit. DW611 speed set at 6. Depth of cut .1256" and plunge rate 4"/min. The feed rate started at 60"/min then reduced it to 24"/min over the course of the cutting. The very last two were made at 24"/min. It would make a perimeter cut then do a tight loop where it had cut before then go back to the perimeter. It would also pause momentarily throughout the last couple pockets.

I do not have a dust collection setup. I tried keeping it clean but there was a lot of dust on the belts and track.

You said this was your first project - have you used your X-Carve at all before this (even just for “experimental” projects)? I feel like those cut settings and bit size are EXTREMELY aggressive, and am guessing you had quite a bit of chatter at the initial 60 IPM. You’ll also find the majority of the community recommends keeping your DWP611 at speed setting of 2 or below (< 18,000 RPM, basically). In theory, you’d want to crank it higher to compensate for a higher feed rate, but the X-Carve really isn’t rigid-enough of a machine to handle that.

I’m assuming that the wide dimension of your cut-outs is in the X-dimension… My first guesses were that you either skipped a tooth in your X-axis pulley, or that the belt slipped in the retaining clip, but I’m a little mystified as to the “error” that only appears in the top layer of that last cut. Definitely check that X-axis belt for tension on both side of the carriage, and that it’s properly routed through the idlers and over the stepper motor pulley. You might also check the stepper motor pulley just to make sure all of the teeth look like they’re in good condition.

Lastly, I did a little snooping on your previous posts… Hail from Indiana! I live a little south of Bloomington.

Thanks. I bought this used and the PO used it frequently but with the original spindle. The first thing I did was upgrade to the 611. I understand the DW611 to be 16K at setting 1 and 27K at 6. The website suggested a speed of 22K on that bit and I messed with it between the 4-6 speed setting and it seemed to do better at a little less than 6. When I stopped the spindle, the bit wasn’t hot to the touch and there was no burning in the wood, so I felt comfortable with it. There was chattering at the higher feed rate all the way around but only across the grain at the lower feed rate.

I have been doing so research online this weekend and I think that there was a build up of debris in the belt/pulleys that was causing the skip. I cleaned the machine out this morning. I’m going to run a couple more to see if the problem goes away. If it does then I’m going to build a dust skirt and see if that solves my problem. I’m also going to look at the belts a bit more closely in regards to condition and tension. I think I’m going to put the 9 mm belt upgrade a little higher on my upgrade list.

I spend a lot of time over at Lake Lemon which is just north of Bloomington. We camp and hang out right behind the Port Hole.

Which controller do you have, Xcontroller or PSU with an add-on box (gshield)?

I spend a lot of time over at Lake Lemon which is just north of Bloomington.

My buddy’s parents have a house on the lake!

I’m looking into the 9 mm upgrade as well, along with Y-rail stiffening.

If those cut settings are working for you, great! I haven’t gone over a 1/4" bit myself, and had quite a bit of chatter at speed 2 and 40 IPM.

I can believe some of your chips might be getting stuck in the belt and causing problems, good thinking.

I have the Gshield. It was suggested elsewhere to reset the controller but I’m going to clean the dust build up off and check the belts then go from there.

I live in Columbus not Bloomington but get over there often between spending time at Lake Lemon and refereeing hockey and lacrosse.

I have the Gshield.

The gshield is not capable of bring the Nema23´s (or Nema17 for that matter) to their full potensial.
Cleaning the boards will aid cooling which is paramount, I would also measure the reference voltage (Vref) to calculate the amps they are limited to.

I cleaned up everything and ran a couple of the pockets without any problem. They all came out fine. There was a fair amount of sawdust buildup on the belts and wheels on the right side, the workpiece is on that side of the table, so that seems to have solved my problem. I’m going to build a dust boot and keep going. Once I have this project completed then I am going to consider the next upgrade. I haven’t decided between the X controller or the 9 mm belt kit.

I don’t know how to figure out the GRBL value. I have seen that type of question from time to time, so I guess I’ll need to learn more about it.

I don’t know how to figure out the GRBL value. I have seen that type of question from time to time, so I guess I’ll need to learn more about it.

Its simple enough once you have tried it, simply open Easel, press CTRL+Shift+D which open up the Machine Inspector.
In the Console box simply write $$ and press Enter and it will report back the current GRBL parameters.
To change one, say $1 into value 255 write $1=255 and press Enter.
Another $$ will report back the new value. A reset of the Arduino may be required to set the change into effect.

Was the previous value 10 btw?

Well, I celebrated too soon. I started another pocket and about halfway through it was missing steps. I let it finish the pocket and when it went back to home it was about 1/2" off the X axis from where I had set home. The Y axis seemed fine. The pockets are being cut in four passes. It missed steps on the second and fourth passes. I think the problem is the X axis. I am going to disassemble the belt and pulleys and see if I can find something wrong.

You are going too aggressive for the Gshield. Lower your depth of cut to like half of what you were doing.

Belts will not be worth upgrading to until you get a more powerful controller.

You are going too aggressive for the Gshield. Lower your depth of cut to like half of what you were doing.

You can also try a smaller bit to lower your material removal rate (MRR). At some point the MRR (and bite per tooth/revolution) will exceed the machine capacity and trouble start. This is where I believe you are at the moment.

For the record, this value define the idle current (power to motor, holding torque, when it is kept stationary)
Value = milliseconds and 255 = all the time. 255 being the highest value.

I am running the 140 oz-in steppers. I noticed the 262 oz-in stepper that Inventables sell says it does not fit the Xcarve. What stepper are you using? Did you need to modify the machine? X-controller is probably the next purchase. I think I’m going to get a cheap chinese kit to put the Gshield on and make a small desktop dedicated to instrument inlay.