Error : Grbl has Not finished booting

but in universal gcode sender has a message error : grbl has not finished booting
so what can i do plz

Does it work in Easel? I am not sure what the problem is, normally that error is because of incorrect baud rate.

grbl has not finished booting

You will also get this message if you issue a UGCS command when connected to a COM port that is on your machine, but does not have the Arduino plugged into that port.

For example, if your Arduino is plugged into a port that is connected to COM4 and you also have a COM1 port on your machine and you tell UGCS to connect to COM1, it will connect, but if you issue a grbl command (for example $$) then you will get the “grbl has not finished booting” error.

i checked, everything is correct but nothing does work

everything is correct but nothing does work

What operating system are you using? (Windows? which version, Mac?)
Do you have the Arduino IDE installed?
Do you know how to run the serial monitor in the Arduino IDE?

windows 7
arduino ide 1.5.7
yes i know how to run the serial monitor in the arduino ide

With the X-carve connected via the USB cable, bring up the Arduino IDE. Check to make sure that you have the correct board and port selected under the Tools menu.

Bring up the serial monitor and you should get a line displayed from the Arduino. Post that message here.

Then issue the $$ command and if you get the parameter display then post those results here.

i have this message 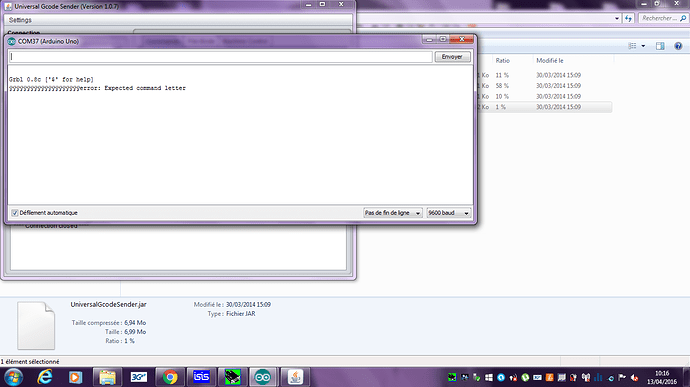 Things I can think of that could cause this:

The first thing I would try is to re-flash the Arduino.

This would be a good time to upgrade the firmware to at least version 0.9j unless you have a reason that you want to stick with version 0.8c. If you do change to version 0.9j then you would need to change the baud rate to 115200 and you would need to rewire the spindle control pin and the Z axis homing switch on the gShield. Spindle control moved to D11 and Z axis homing switch moved to D12.

Also, it looks like you are using maybe French, which I don’t know. Make sure that the “End of Line” is set to “Newline” (in the Arduino IDE). It’s the value to the left of the baud rate at the bottom of the screen.

how can i flash the arduino

Use the Inventables fork.

i have this message but when i put $$ i have nothing 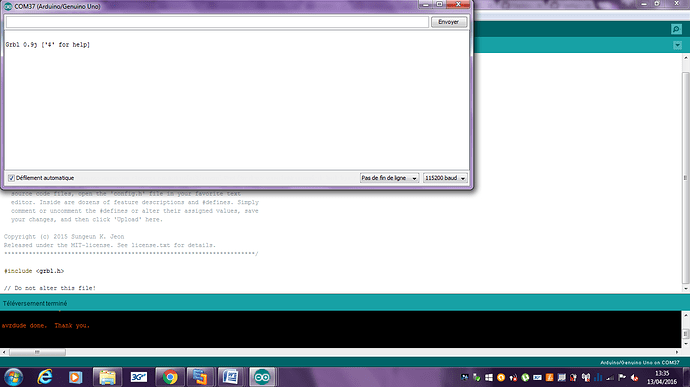