Etching PCBs all in one software

I’ve been working on a piece of software to drive my Carvey. Easel just wasn’t cutting it. It was easy to take control of the Carvey and send G-Code files to it. That isn’t much more than a glorified serial terminal. I wanted a more visually appealing tool to identify errors before I start a job. This drove me to visualize in 3D, the G-Code, sacrificial board, probe block and end mill. Everything was working great but I bought this machine mainly to etch PCBs for rapid prototyping. Again, back into the code to visualize Gerber files. I am now able to load a project of Gerber files, visualize them and generate G-Code from them. Below is two photos of the first PCB I carved. It worked much better that I had assumed. Each trace is electrically isolated and connected at both ends … I checked their continuity. I have grand plans for this software in the near future.

Here is a video of it all in action: PCB carving using Inventables’ Carvey CNC 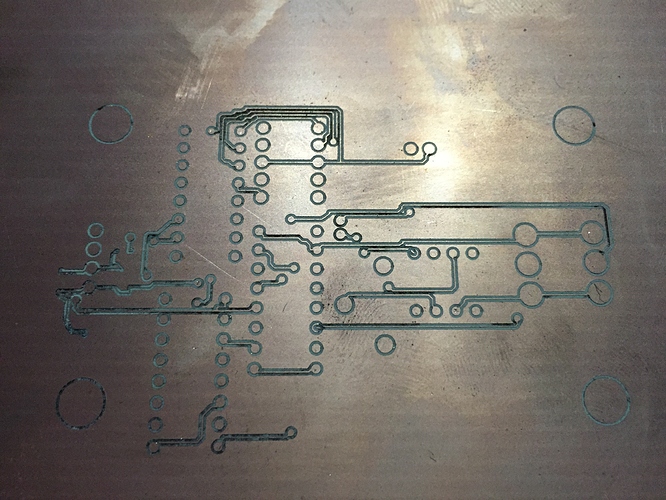 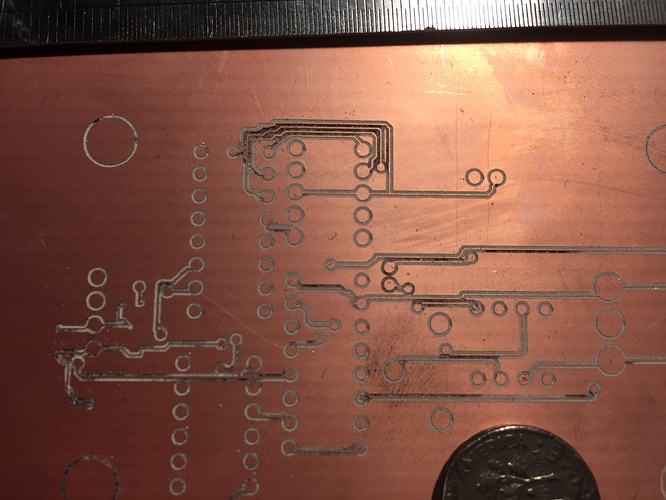 An exciting concept for 2 layer boards. Are you going to drill the holes, I suppose you could use a collection of different size bits for that if your gCode can create vertical only moves? Do you have plans to plate through the holes, or use z-wires? Will you be able to do various surface mount parts? Some of those have extremely close spacing.

I have an array of drill bits from Inventables for just this purpose. I’ve already parsed the drill file that get exported with the gerber files and it is easy to generate gCode from it. It will also suggest what drill bits you need for the entire board and stop between each tool change, letting you know what bit to use.

For Via’s, it will depend on the application. General purpose, low frequency, low current applications, I want to try that conductive ink. Anything else, I’m going to just solder a wire between the plans. It’s not as pretty but boards made like this are for prototyping anyway.

If you look close, you’ll notice the dim in the bottom of one of the photos. These traces are really small (0.127 mm) and it didn’t seem to have a problem with them. I don’t think I’ll have an issue with SMD traces or pad. I’m visualizing the SMD pads already but I haven’t gotten around to analyzing the cut paths with them.

I’m hoping to have both SMD pads and the drill codes hooked up this weekend.

The best part about all of this, I’ve built it all in Win 10 iot portable classes … except the 3D visualization. You can run all of this functionality on a RaspPi or other compatible boards. I have a touch screen enabled Pi3 that I verify all functionality on with each release. 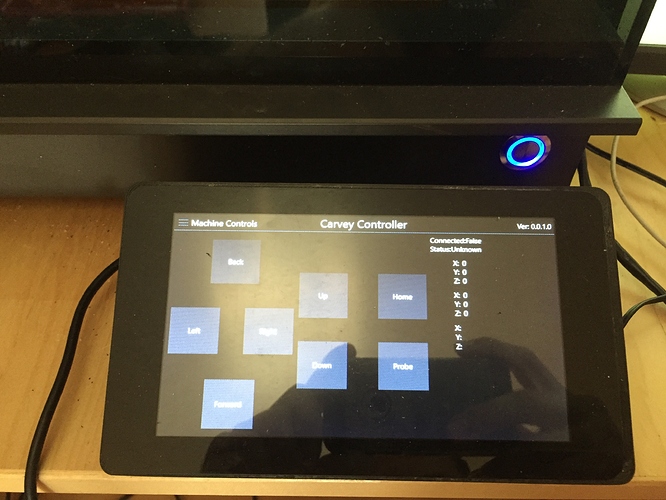 Thanks for checking it out. Any suggestions on what it should do or could do is always welcome.

It looks like you’re using all through hole parts. You should consider using all SMT components for single sided boards, it makes the process quite a lot easier. Especially if you have a proper soldering iron, rather than those $5 ones that are only suited for wood burning.

I normally use SMD for most of my boards. This design isn’t mine, I just happen to pick it because it had really small traces. I have a nice Hot air Rework Station so it’s no big deal to use them. I don’t want to limit it’s ability so I’m going to develop it to work with both through hole and SMDs.

There is a app specifically for doing what you want already.
http://chilipeppr.com/
its like easel except it was meant for PCBS and it has features to probe the board for flatness. Check it out.
I am interested in doing my own boards and have all I need cept the process using a PCB design cad to the CAM.

I used that product when I first received my Carvey. It works good as a serial gCode sender but it doesn’t process Gerber files. Not that I have found anyway. I’m also not a big fan of being required to have the internet to run my programs.

I saw a video of it probing and how that works, it was impressive and gave me many ideas of how to implement exactly that.

I’m taking the exported PCB design and generating the gCode to cut it (PCB design cad to the CAM). I’m pondering the idea of going directly from an Eagle design. I have many future plans for this tool. Such as directly manipulating the Gerber file and/or the gCode cut lines generated.

Thanks for the suggestion.

It works good as a serial gCode sender but it doesn’t process Gerber files.

I did a quick google search and found this software http://flatcam.org/
FlatCAM lets you take your designs to a CNC router. You can open Gerber, Excellon or G-code, edit it or create from scatch, and output G-Code. Isolation routing is one of many tasks that FlatCAM is perfect for. It’s is open source, written in Python and runs smoothly on most platforms.