I’m new to the x-carve and was wondering about sizing your carves in F-engrave. I’ve tried looking it up and I’ve probably seen it but it just didn’t register with me. Is it determined by the size of the image you’re working with in inkscape or is there some setting in F-engrave that lets you determine the size or is that set up in your controller software. I was just wondering because I wanted to do a test carve on a mason jar tag and didn’t know how to get it down to that size.

1st option:
If you are bringing in an image (DXF or picture) you set the “Image Height” in the upper right corner of the main F-Engrave window. The width will be scaled to maintain the aspect ratio unless you stretch or squeeze it by changing the “Image Width” setting to something other than 100%.

2nd option:
If you have a DXF file made to the size you want you can set the “Set Height as %” option in F-Engrave. Then F-Engrave will use the dimensions from the DXF file multiplied by the entered percentage. Use 100% to maintain the size in the DXF file.

Thank you, I thought that might be it but wasn’t certain.

One thing that tripped me up was cutting depth when v-carving was controlled by ‘bit diameter’. Just fyi.

Having trouble with positioning on F-engrave. What’s the best way to set up a carve and have it centered? I have used the default origin with a bump stop and haven’t had much luck, tried jogging to get to a relative area but I’m not happy with the results. Also tried creating a dxf to preserve the dimensions but for some reason it doesn’t recgonize my dxf’s from illustrator. Been grasping at straws for the past few days over it and figured either @Scorch or @PhilJohnson could help me out?

This may be a dumb question but why can’t you use the “Mid-Center” origin option it will put the origin in the center your image?

Side Note: I would love to see a DXF from Illustrator that F-Engrave can’t open. Please e-mail a sample DXF file to the e-mail address in the F-Engrave help menu if you are willing. 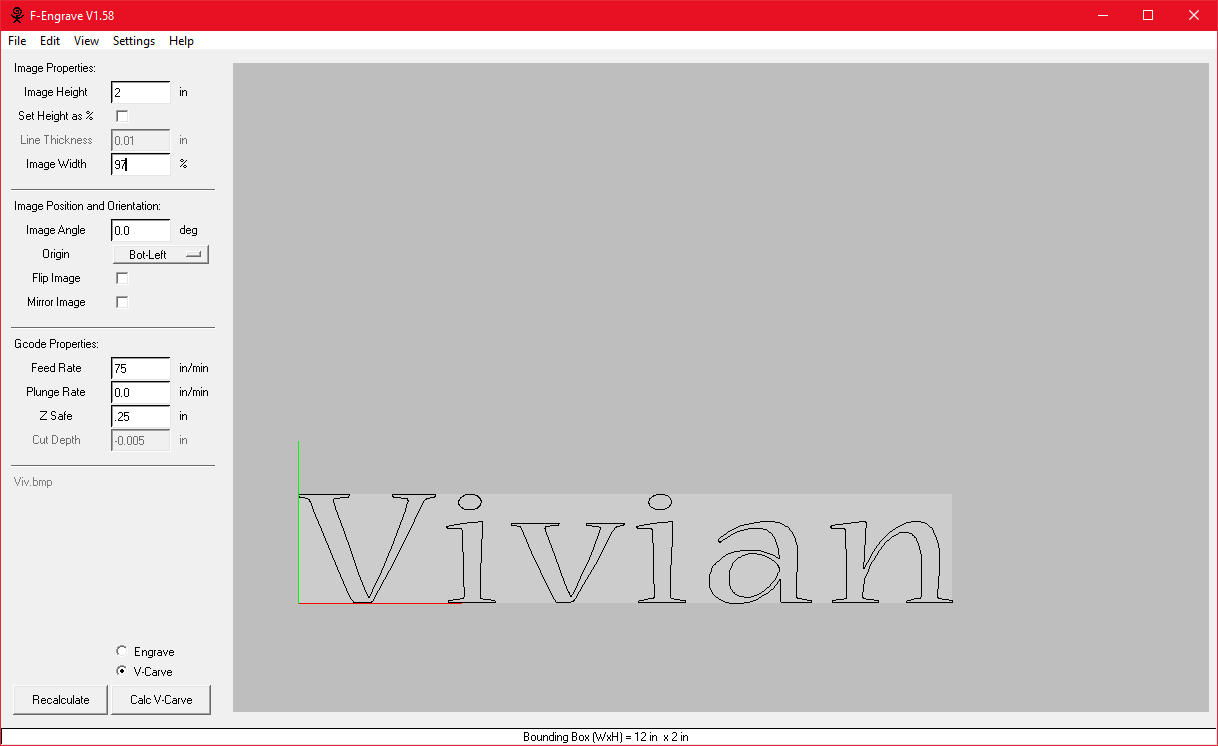 Pasted image1218×746 9.72 KB
Which I have to jog the machine to get it centered on the piece. My dilemma is that I am making doll beds for my nieces with their names carved into the foot board panels and have dadoed the surrounding frame 1/2". So I need this centered on the panel. This is what I was trying to go for in Fusion but thought F-Engrave would be better suited, 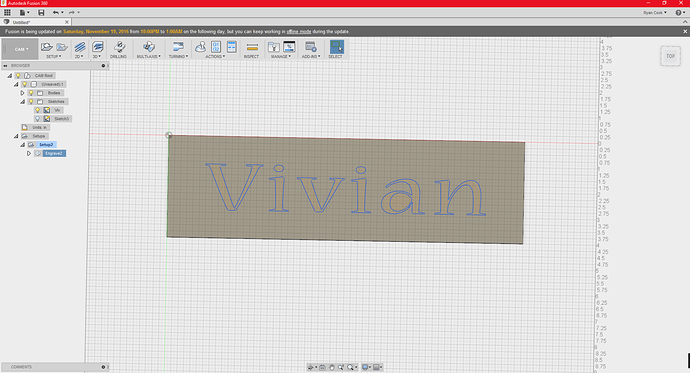 Pasted image1920×1040 340 KB
. When you say Default is the origin from the software it came from @PhilJohnson wouldn’t this be what I am looking for or is it something else? I created a BMP in Photoshop and made the layout 4"H x 14"W (the size of the panel) and centered the text, but when I executed the carve with Default as the origin it was not centered ( I use your bump stop and G28 setup to align things) so this makes me think it does not carry the layout over from the software it came from. With that being said I looked into creating a dxf, I created the text and paths needed in illustrator and exported it as a dxf. The photo of Fusion is the dxf file, however when I try to open in F-Engrave I get this, 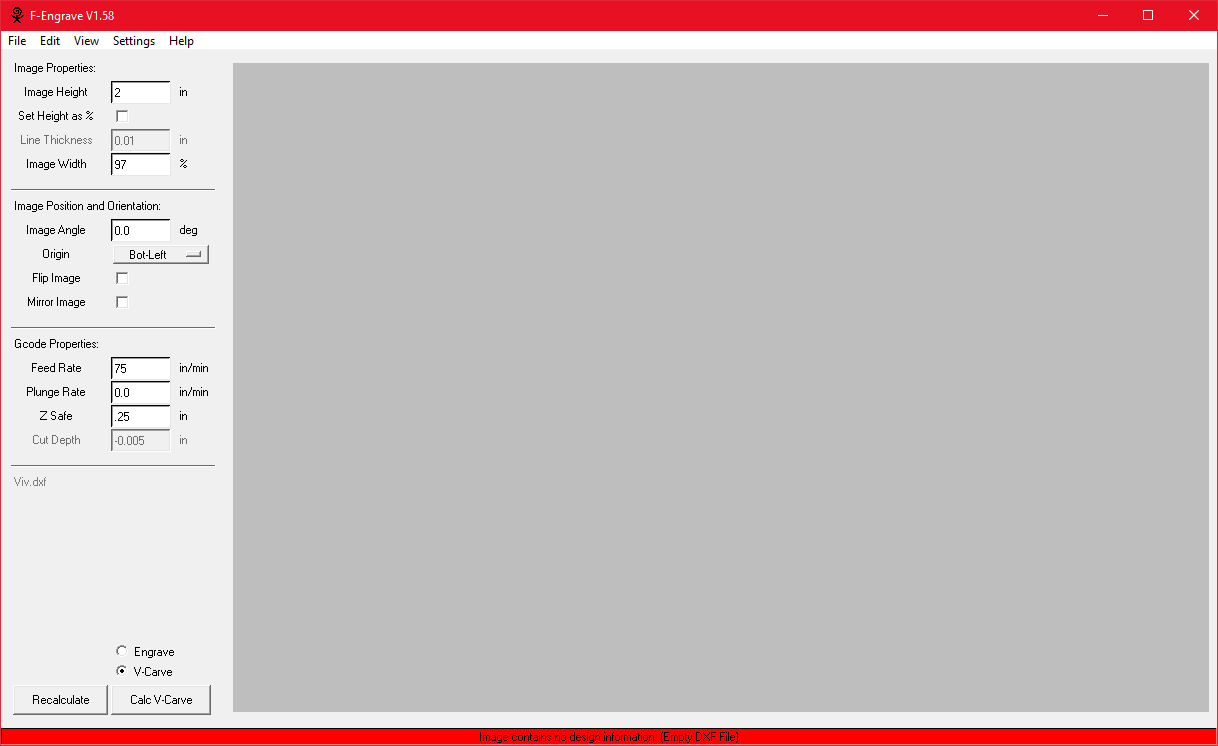 Pasted image1218×746 7.53 KB
@Scorch. So fusion recognizes it but F-Engrave doesn’t. Am I having a sizing issue with the BMP? Could I add a very thin black stroke around the edge of the BMP so F-engrave sees it but won’t carve it to retain the dimensions? I’m just looking for a way to put the piece against my bump stop run G28 and zero then carve.
Scorch November 19, 2016, 6:23pm #9

@RyanCook thanks for sending the DXF file (via e-mail). I was able to figure out why your DXF was not loading in F-Engrave. There was a bug in F-Engrave that prevented loading DXF files the contained no features with positive Y positions.

I have fixed the bug and released a new version (V1.61) on the F-Engrave web page. Now your DXF file will load with the coordinate system where you need it.
F-Engrave Download Page

FYI -
Another way to shift the origin for the F-Engrave output is to change the “X Offset” and “Y Offset” in the F-Engrave “General Settings” window. There will be no visual indication within F-Engrave that these settings have been changed but the g-code output will have the origin offset by the values entered. So for anyone that does not have the ability to make a DXF file with the origin in the desired location the offsets can achieve the same effect.

I have been using https://nraynaud.github.io/webgcode/
to view the gcode before sending.