Falcon Ornament - based on Phil's

This is my first attempt at a complex (for me) 3d carve. I downloaded the Mil Falcon image and imported into Vcarve. This is what the output was shown as: 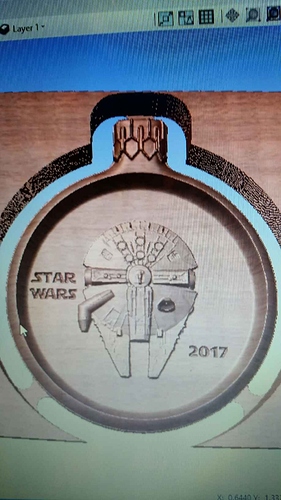 I had some spare walnut so after a full night of carving, this what the end product looks like after some light sanding. The tapered 1mm bit Phil recommended is the one I used for the final pass and that 1/2" 60 deg bit is what I used for the carve portion. I used a 1/4" end mill to rough it out which went real fast. 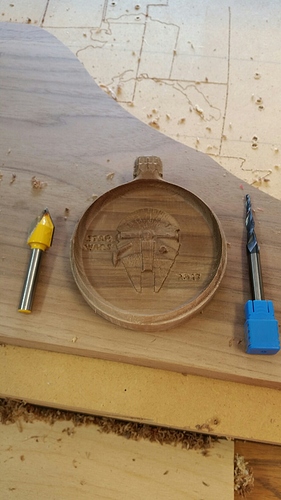 I used 100ipm instead of the recommended 130ipm. I will increase the speed now that I’ve seen it in action. Probably ran 10-12 hours which is too much for something like this.

I’m not happy with the carve, I think I should use a smaller v-bit as it almost grazed the side of the ornament and the letters are a bit too close to each other. Maybe it will look better when I get them painted.

I think the Falcon needs to be a bit more proud to stand out a bit more. I thought it would be higher based on the preview, but not.

I think there should be more detail on the Falcon itself. Again, the preview shows more detail than what I actually got. Maybe I’ll use a .75mm bit for final pass next time. I thought the 1mm bit looked a bit big. When I looked at the comparison. a 1mm is .039 whereas a 1/32 is .031 yet the 1mm looks more like a 1/8" bit visually and not anywhere near as tiny as a 1/32" bit.

Remember, I’m running on a stock X-carve, no mods as of yet. My b-day is coming up and I’ll be asking for the reinforced gantry bar.

Looks awesome, great work. I love to see that you are going to iterate on it though!

I just cant believe that something the size of the bit took 10-12 hours!

Quite the discrepancy. I just now set up my 1mm tapered BN bit to use Phil’s settings (I used it under the standard ‘straight’ settings last time) and now the estimated time has ballooned up to 15hrs (with 1.5x multiplier). What settings would you recommend to get the time down ?

I’m doing about to do another one here today… It’s configured as a tapered ball nose with .008" stepover and speed of 120ipm.

I moved the letters and numbers apart from each other to let the v-carve do its thing. I’m still not sure whether to use my big dinosaur or the little engraving v-bits for those small letters.

Thanks. I scooped up similar settings earlier from another post you did awhile back. The carve finished in around 15-20 mins at 120ipm. I may have to go back and dbl check the plunge rate. I’m guessing there is something magical in the way Vcarve does tapered ball toolpaths vs. straight BN’s.

Did my HP ornament with a .75mm BN. Two problems…

Biggest: I used a 1/4" EM when the tool path called for a 1/8" EM on the rough pass. The finish pass couldn’t clean up enough.

Small: Didn’t have the correct settings for the .75mm tapered bit.

I went back into Amazon and pulled out what I think were the correct settings. I got the 4 bit set Phil mentioned not too long ago. .25mm -> 1mm set of bits.

Time to redo. lol I’m learning a lot here and at least the tool path wasn’t a monster like last night’s one was.