Hey guys I love everything about this machine and software. Great work. I was just thinking about how amazing it would be to have more tools for creating a design on the easel app. Such as things like a line tool, free hand, and other things that are incorporated in many illustrators. Not sure if this is possible but just thought i would throw it out there. Thanks for everything guys.

I believe there was a freehand tool at one point, but it had a bunch of compatibility issues.

i dont know if this is the right place to post.

I spend loads of time ovelooking cuts on xcarve, and I do have to plan ahead how much time it will take for certain cuts, so i dont know it this has been brought to light before, but is it possible to have a timer instead of a percentage indication? this will enable user to know much time is required. i generally take a split of 5% and calculate like so, but i think this can easily be converted to a timer.

Also, sometimes i set feedrates which are far lower than the machine can take, and would love to increase the speeds during cuts. is it possible or im asking somthing which is already there or it doesnt make sense?

Because of the way the code is sent to the machine, it’s very hard to get an accurate time estimate. You can use a program like Camotics or OpenSCAM to virtually run the gcode. That software has a time estimate window that works pretty well.

When I forget to set the feedrate up high on my machine, and I realize quickly, I just hit the stop button and after the machine returns to home I change the feedrate and run the job again. The only trick is that in the pre-flight checklist you have to tell it “use last home position” so it starts exactly in the same place. If you catch it right away, it won’t eat up any time and your carve won’t be impacted.

We added an estimated time feature today in Easel. Check it out and please give feedback.

Anyone tested it out?

Haven’t started a stopwatch to check, but the estimated time was pretty close, and at least a ballpark is better than firing it up and waiting.

I wouldn’t mind a post run statistic in the final popup to show actual runtime and any other cool post cut info that would be interesting.

What other kind of info?

Not sure. Just off the top of my head, some pointless, but at least a little interesting to me:
-Actual run time(compared to estimate)
-Time paused(for bit changes, etc?)
-Number of times project successfully run
-Volume of material cut

This post has some aggregate stats on the accuracy of the estimate: [New Feature] Carving Time Estimation 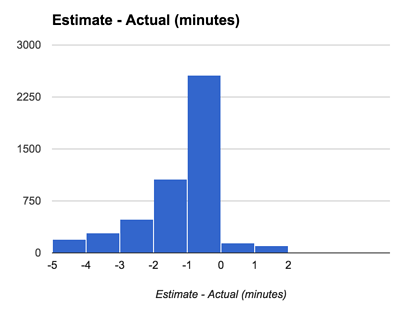