so im just confused about feed speeds and why im getting burn marks.
i couldn’t fine a feed speed guide anywhere, so i figured i would start slow and ive been running my test images at 160mm/min, it look appropriate. specifically when cutting out and with a v bit.

these are my first 3 cuts in order

can anyone give me some pointers on feed speed and as to why my vbit burned the wood on the second try. internet said i was going to slow???. it looked like it didn’t want to go faster. how much can these things take. 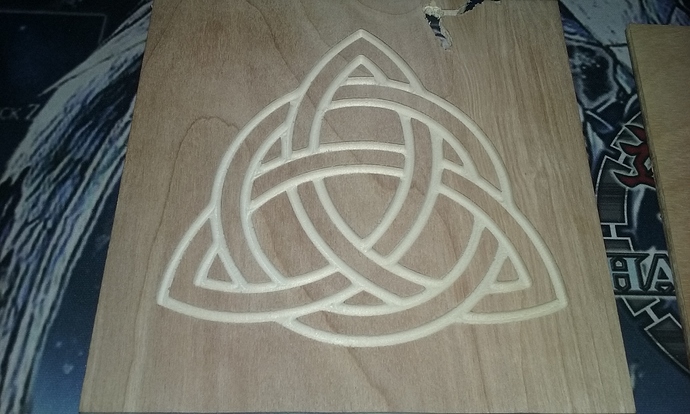 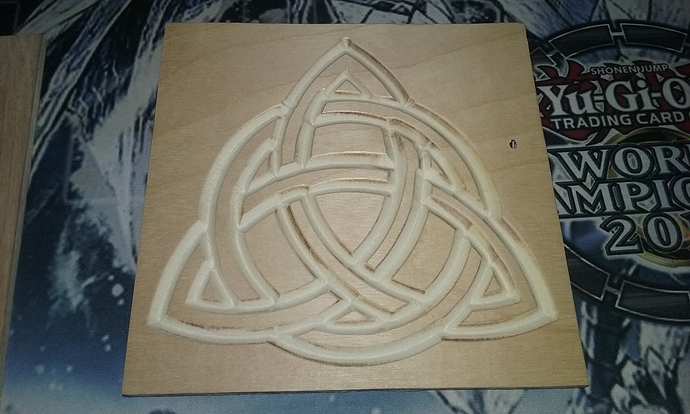 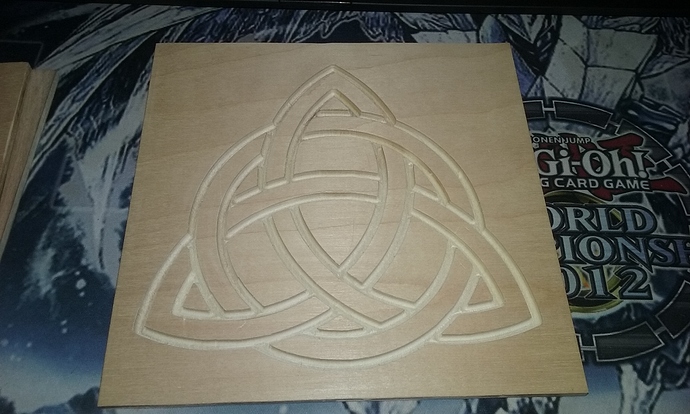 I would bump up the speed on the vbit to 1000mm per minute. Dewalt spindle?

yeh
ill give it a try. but last time i had it that fast it looked like lighting and it broke a bit. ill do some air cuts

1/2" 90 degree v-bit is not going to break…no worries. The burning was caused by the bit rubbing and not cutting, moving it faster will eliminate the burning.

what is your depth of cut on your carves? because you have to keep that in mind so you dont deflect the bit and break it when moving faster but I would try 40% of the bit diameter as a staring point remember you have to maintian the proper chipload on the bit for it to preform correct

Yeah feed and speeds are confusing.

I have only a vague handle on it but as I understand it you want the bit moving so the blade edge is always cutting new wood. If you are moving too slow the blade keeps going over the same spot it already cut and rubs. This causes friction which builds up heat and chars the wood.
(There are also issues with sawdust building up but that is a bit different topic)

With the larger bits (1/4") the ideal feed and speed combo usually require a slower RPM than the router can do, or a feed rate so high that you might start to have quality issues.

For you, set the router for the lowest RPM (#1 on a dewalt) and see if that helps.
Then start raising your feed rates.
If you start to have quality issues from the higher feed rate (probably not with a V bit) then you can try reducing your dept of cut.

From what I can tell form my reading the ideal Feed and Speed rates for wood are determined by the material and bit. Depth of cut is more about the bit flexing under load (deflection) and is a different topic.

This ials ali havent hurt the v bit. Or my 1/4 endmill. But yeh it destryed a small diamond cut flute. Its was a cheap bit anyways.and i still have 7 more.

Also. Sorry for the typing errors at the top. This websites is impossible to navigate on a phone wnd i typed it blind and cant fix it because i cant see it.

Can anyone tell me how to calculate speeds. I couldnt find anything on this. And inventables. As great as they are. Expects were using easel. Which feels like a crutch. Because it doesnt teach me how to make my own cuts.

I could take the numbers given to me here but i also wouldnt learn as much if i just typed them in because someone else did the math for me.

Thanks guys for the advice so far

Here’s a good link to a Precise Bits page on calibrating feeds and speeds: http://www.precisebits.com/tutorials/calibrating_feeds_n_speeds.htm

Each machine and each type/size f bit is going to have its own ideal feed and speed, the best way to figure out for yours is to just run each bit at multiple depths and speeds and find what works. I’ve found that for straight flute flat end mills, I have to run shallow but fast. Upcut ball end mills, I can run deep but have to go slower.

For what it’s worth (and there’s a HUGE body of opinion on this subject in these forums), I simply leave my DeWalt on full speed and adjust the feed rate to suit the wood. I do have one V-Bit with replaceable tips which isn’t perfectly balanced, so I reduce my machine’s speed down to “2” or so, however apart from this, I rarely touch the speed at all. I’m also often cutting at 50-60" per minute at 0.25" - however what works for me, may well be entirely useless for you.

When you’re teaching yourself the vagaries of a particular machine (and this is true for both an X Carve and $100k machine), the fewer variables you adjust at a time, the easier it is to get an acceptable result. Agonosing over feeds and speed is critical if you’re doing this for a living and machine time and tool costs are critical, but for a hobbyist, the best thing is to gradually try adjusting only one thing at a time until you get an acceptable result.

Certainly listen to the advice of others, but remember, the DeWalt and most of the tools we use in it, is designed primarily as a hand-held router; as such there is enormous lattitude in what you can do with it regarding feeds and speeds. Providing you’re not setting fire to your work, filling the street with smoke or driving your neighbours nuts with the noise, just find what works for you and your machine.

thanks guys. ive learned alot since i started this post. still got some settings to play with. but i cut my dads name and my name out with the new feed rates and it took like 2-3 minutes each. and another 3 minutes to carve the block out.

and now im doing my first 3d piece as i type this. and not a single burn mark or damaged bit. guess i shouldn’t have been so afraid to open the throttle.