Excuse the verbosity, for the TL/DR folks the main requests are in bold.

I’m finding that the number of Easel files I am making is FAR outpacing the ease of finding the file in the future. For instance, I have to go back 50 files (5 “next” screens) to find my Halloween cuts, 100 files (10 “next” screens) for my drawer fronts, and much farther for other stuff. I am getting very concerned about making a variety of projects that may be used in the future. I have been considering whether to download and save the G-code in a separate file, but I would prefer to use the most recently optimized G-code in Easel. Just imagine having to use G-code that was made by Easel in June, before the depth-first optimization…

I’m sure it’s been requested a few times, but it would be nice if there was a way to file or categorize the Easel projects, such that sorting and finding them would be much easier. It may not have been a problem early on, but with 150+ files I am now finding it to be pretty painful. I don’t want to assign numbers to the project names and track them in a binder, since that’s also painful and would make me want to go with a different method, such as using a program other than Easel.

Since I can’t categorize the files, I am having to assign descriptive names that are often longer than the 20ish characters that are shown. If categories or folders can’t be easily assigned, could we possibly have the option to expand the width of the project list window so we can read the full project name? Or maybe even make it open to the width of the longest name in the list?

On a separate note…

Every time I go to open a new Easel window it opens two windows, which automatically adds an Untitled project to my list. Unless I jump on it right away, I find that I have to open that Untitled project later in order to ensure it’s blank and not just an early unnamed version of something. For this, I have two requests: 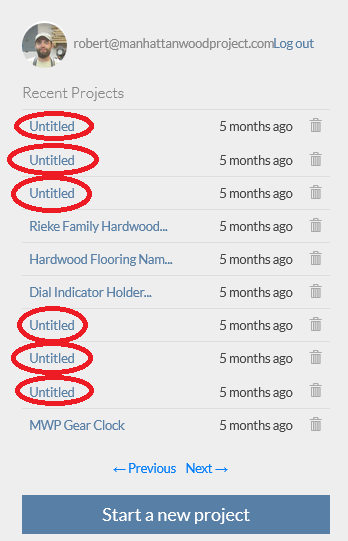 “Folders” would be awesome.

@RobertA_Rieke we have been thinking about how to improve this and @chrisbalin has done some mock ups. It’s definitely on our radar for 2016.

We’ve also been discussing how a project can have multiple files.

Does anyone else have feedback on this topic?

I obviously don’t know your data structure, but IMO the simplest way would be something like this: 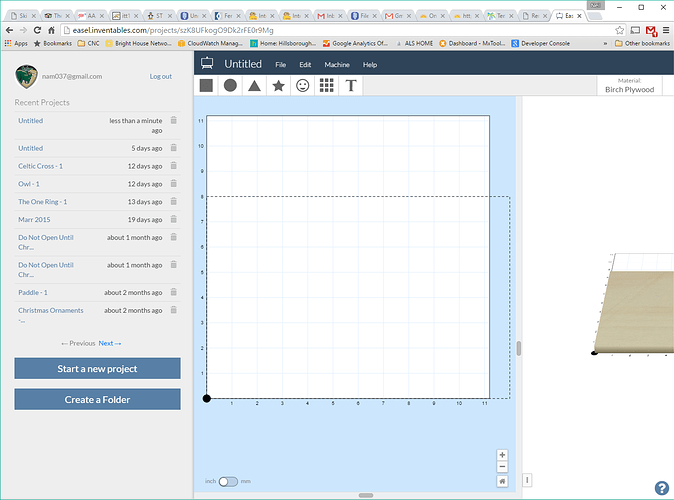 I guess Easel files don’t have a “format” yet. Would you want SVG or .esl (just made that up), something else?

Ha! Yea I was just curious what you were thinking.

It’s gonna get tricky when we add 3D natively in Easel because SVG isn’t the best format to store 3D files in.

My understanding is STL files describe only the surface geometry of a three-dimensional object without any information on color, texture, material, bit used, on the path, outside, inside etc. Also I don’t think here is any scale information, and the units are arbitrary so importing back to in or mm would be on the user to get it right.

My understanding is this will be part of the new API. I think the existing apps will either be backwards compatible or there will be a one time conversion.

There was talk about an offline mode but there are some serious complexities that need to be considered.

Google has struggled with offline mode for google docs. I don’t understand what makes it such a hard problem. It might have to do with getting out of sync and how that is reconciled.

Most purchased models for cnc carving are in STL format. The models are dimensionless, so you need to know what units it was created in. There are some amazing models CNC ready for sale all over the internet.

Can you post a few links so I can check it out?

I’ll find some links of some I ordered from…my latest project was carved from STL files:

Started cleaning the fuzz on the first one (on the right) and cut the second one. The wooden border will be removed...trimmed to the edges of the carvings and it will be placed in a shallow pocket on a cabinet door...I will carve a small flourish that will go above these carvings on each door. I hope to have time to make the cabinet this week. Total carving time for both about 14 hours. [image]

A couple sites to look at:

You can find thousands on ebay as well…a search for “stl models” will give you a few to look at.

I would think a file from easel would have to include not just the svg, but also the material dimensions and wood type, bit and cutting parameters, tabs and placement, etc, if local storage were what you were going for.

I would be happy with just folder storage in the easel environment, to be honest, but I never have the problem of wishing for offline work capabilities like some others might, because I have Internet coverage just fine in the shop.

Agreed. Though I wonder if I would fall I to the unscrupulous category, or the simply stupid?

This is not so much of a problem with small less important files but when I spend 2 hours setting up my machine and then perform a 15 hr cut this can pose a huge problem so in that case I would download the easel file and run it local on my computer I am not sure but is there a way to get easel local on the computer ?

Easel carves without the internet. You only need the Internet to save or load a new file.

I have seen this come up a few times. And can. It agree more. I also have multiple multiple projects. And it is getting to the point where I don’t want to start new projects. Because it will make it that much more difficult to find older ones.

Any way to organize it, locally or in easel itself, would be great. Even without local saving or file types. A way to have a click the button top left corner->click folder(Star Wars projects)->and be able to move all Star Wars into this folder. Then have others. Would be the best first step. IMHO.

How does the code in the browser hold the information that makes up a project? A hierarchy of js objects?

If so, couldn’t you dump that to json files for download?