Finally got my X-Carve Finished just a couple of concerns!

I spent the last two days getting everything built and wired and spent the morning verifying all my connections and made sure everything was tight and aligned properly.
That said I was time to hit the switch and thankfully no smoke! I went through the setup instructions then did my first cut, 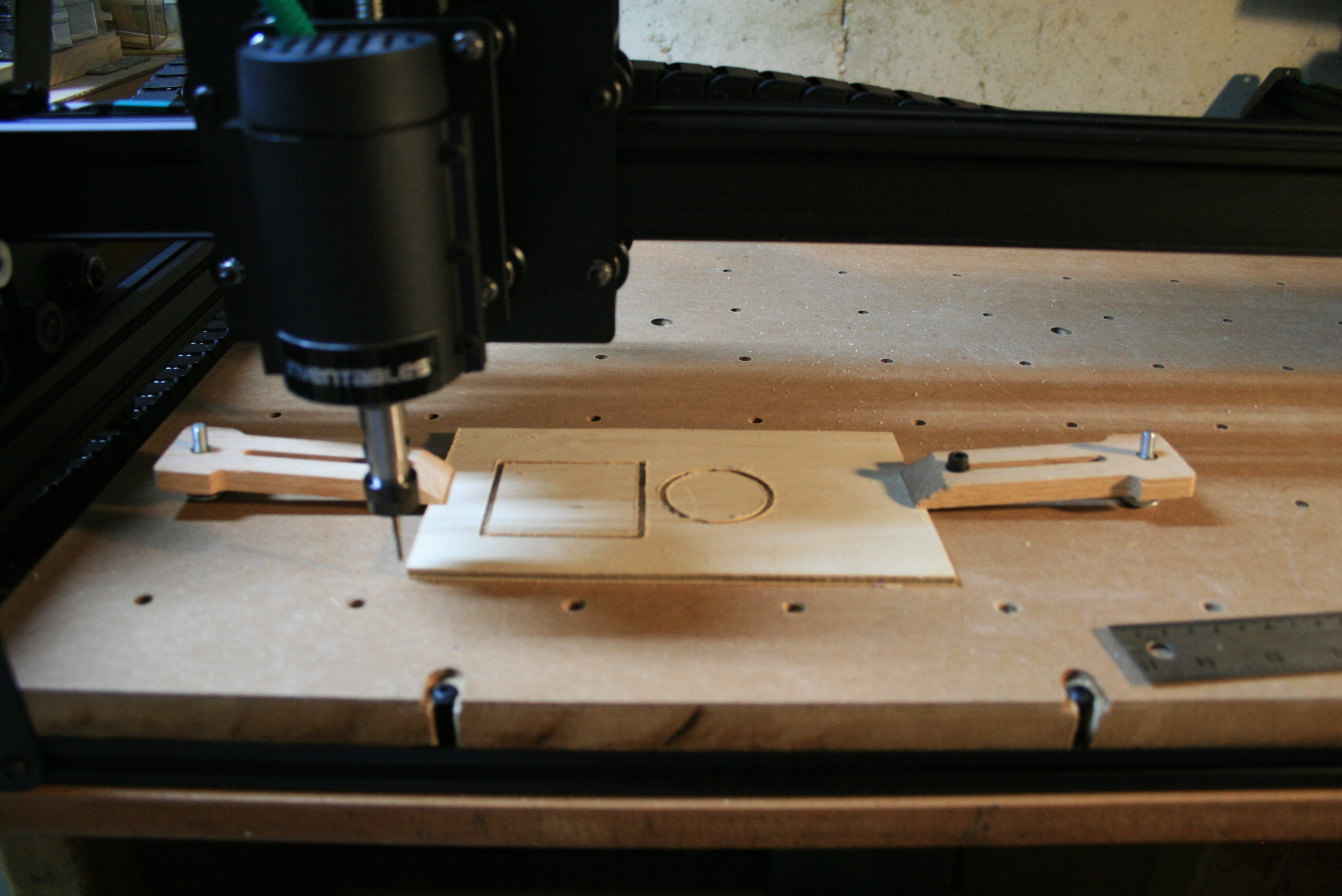 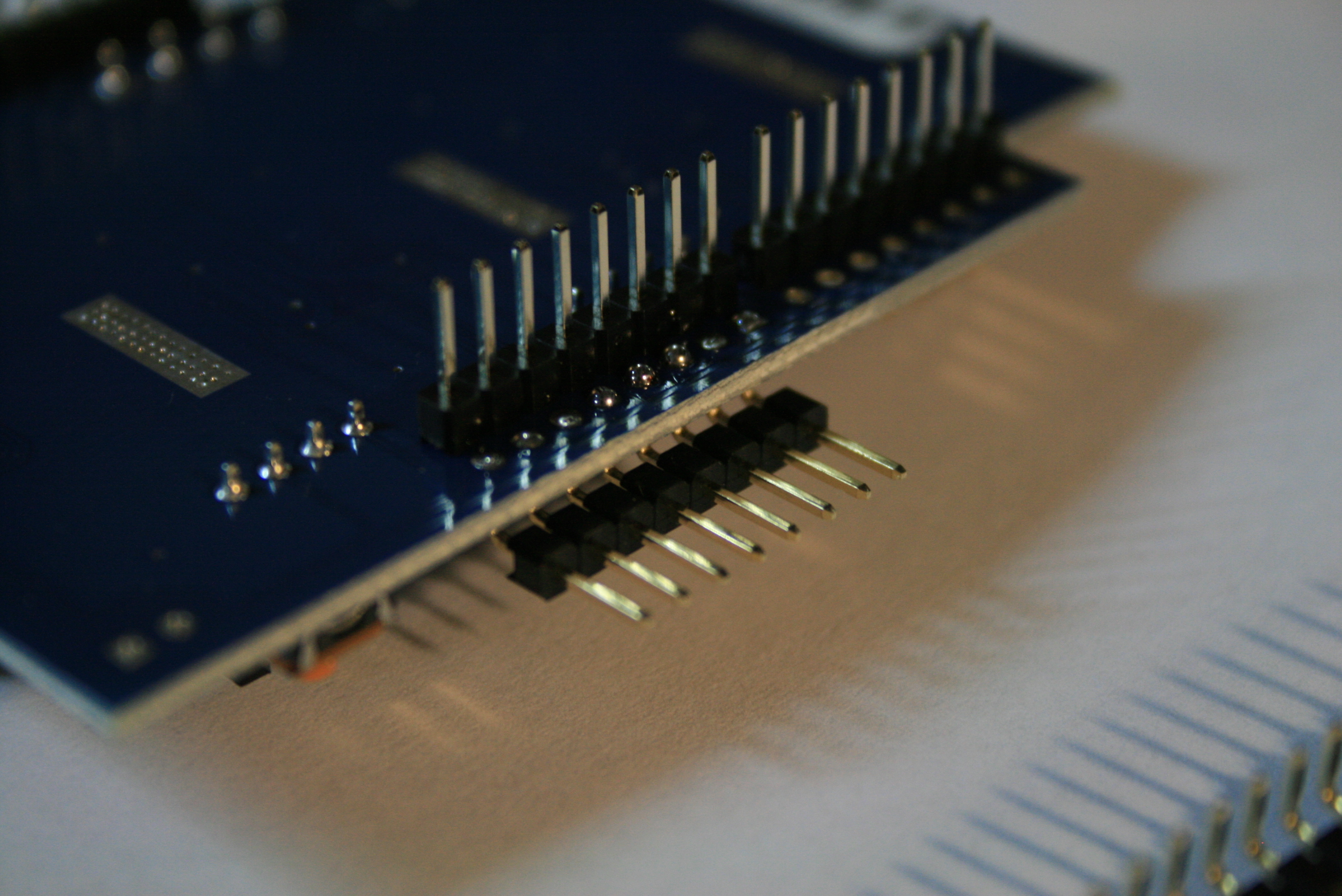 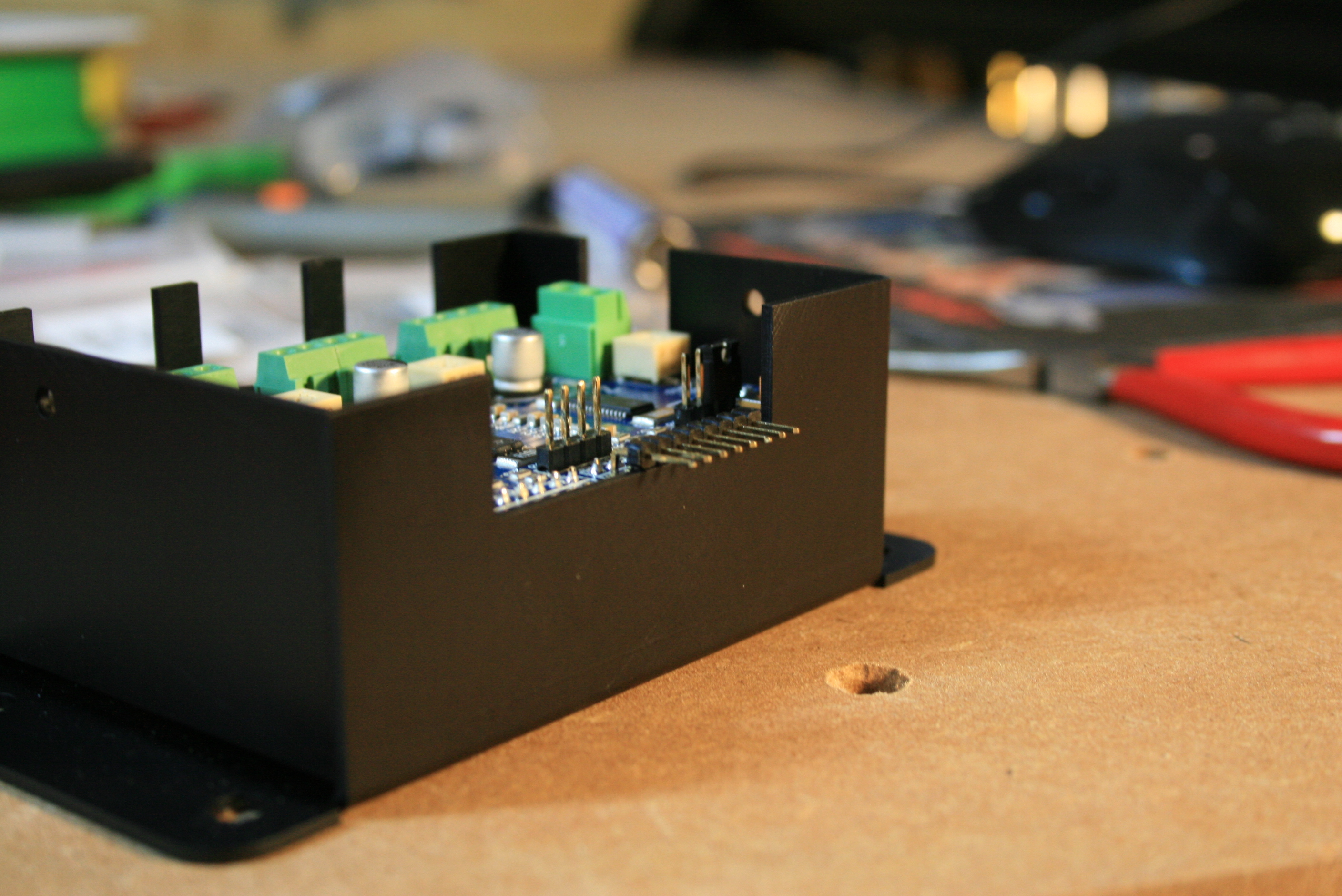 4311362e4fb357f6e78fc7b77b7cd9f5be8dce863983.JPG2816×1880
My second concern is not the fault of inventables but my own screwup! when I coated my homemade wasteboard with the Minwax wood hardener I neglected to seal the edges first and since it was done outside the wood absorbed moisture around the edges causing my board to be thicker along the edges, hopefully that will even itself out in the longrun.

Um, I think your header pins are in backwards!?! The other side of the pins seat down in the board till that plastic part is sitting down on the PCB so that the pins on the underside of the board slip into the arduino PCB. With them installed that way they will never reach the Arduino, are your Limit Switches and Spindle control working properly? Did you do the Homing sequence?

Agreed, pins should be fitted so that the black plastic butts up against the board. I.e. Should be put in the other way around. Should still work though as the pins don’t make a connection to the Arduino below it.

Thomas,
This was a concern brought up earlier where some folks had to relieve the case so that the pins would fit as specified but somewhere along the line Inventables started supplying the wrong header pins.
I had mentioned it in another thread and when I received my kit I “Magyver’d” mine to fit. The Grbl Shield is fully seated in the Arduino and the black plastic of the header just sits on the case. Instead of fully inserting the header pins I fit them flush with the bottom of the board and made sure I soldered both sides.
I have plenty of experience with circuit boards (anyone remember “heathkit”?) so I was sure it would work, and here’s the proof! 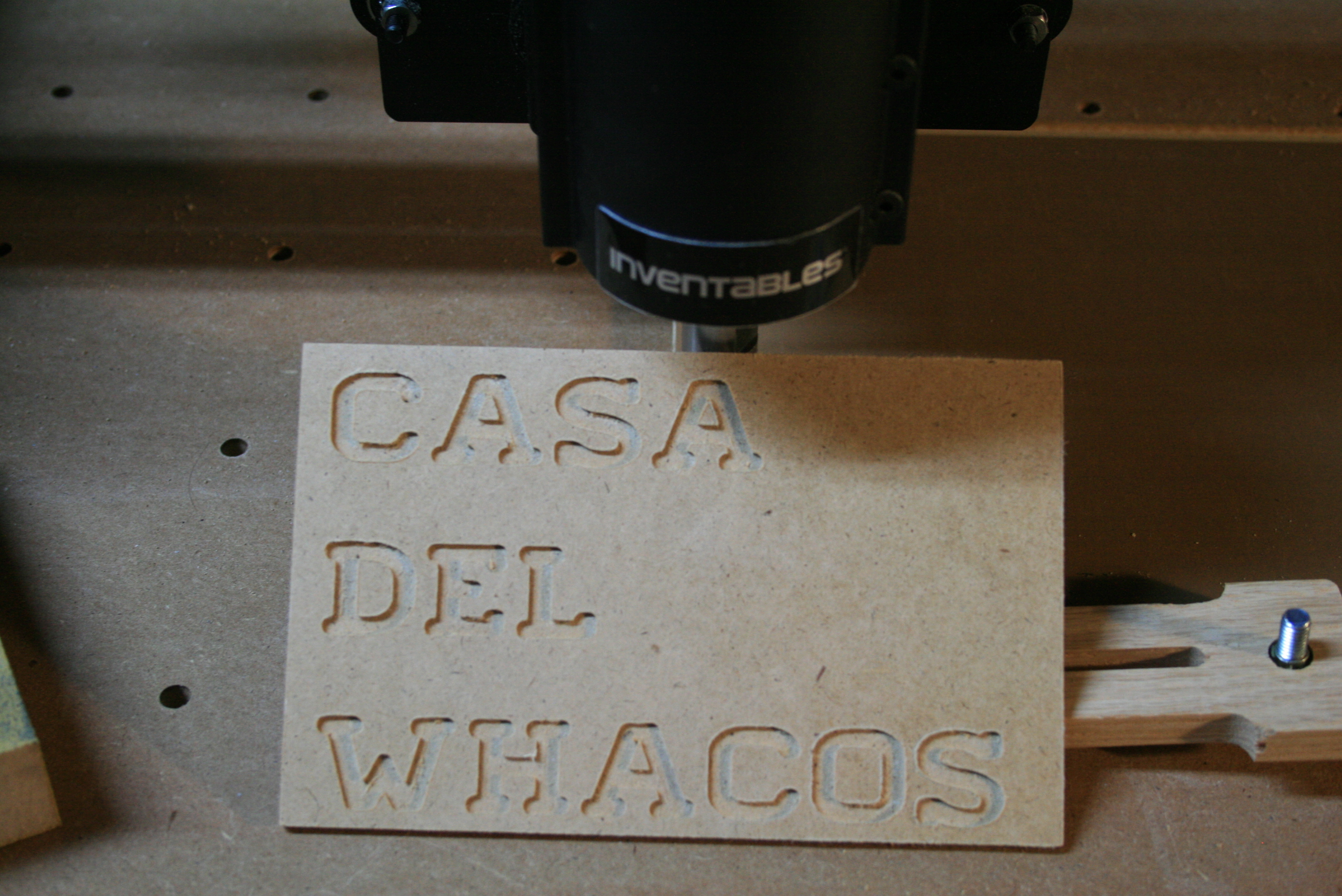 Remember folks, when something doesnt look right always ask questions, and that’s how I knew this was going to happen by reading this forum top to bottom and front to back,

Oh ok! Sorry man, I didnt know your background with electronics so when I saw the pins in wierd I thought that might have been the concern and why you though it was the wrong pins! Hope I didn’t offend you, just never know what level someone is at!! Glad you found a work around on that. On the waste board, do you have a bit where you can re-surface the board back flat?

No offense taken, its all good

I am hoping the board dries out some now that its in the much cooler and dryer basement. If it gets to the point I need ultra precision then I will add a thinner waste board on top and surface that one. As you can see in the sign I made, the depth of cut was even all around since I moved the cutting area closer to the center of the waste board

I have been testing out many different types of wood and cutting bits as well as different software to run g-code. I tried Chillipeppr and Universal G-Code Sender and of course Easel and I can safely say Easel is bay far the easiest but with the least amount of features.

I have finished cutting a couple of small projects just to “break in” the machine so i decided it was time for a larger project. In the photo below is an R/C sailplane launch dolly, used for aerotowing sailplanes. The dolly helps stabilize the plane on it takeoff tow so that a wing doesnt touch down and cause a problem. 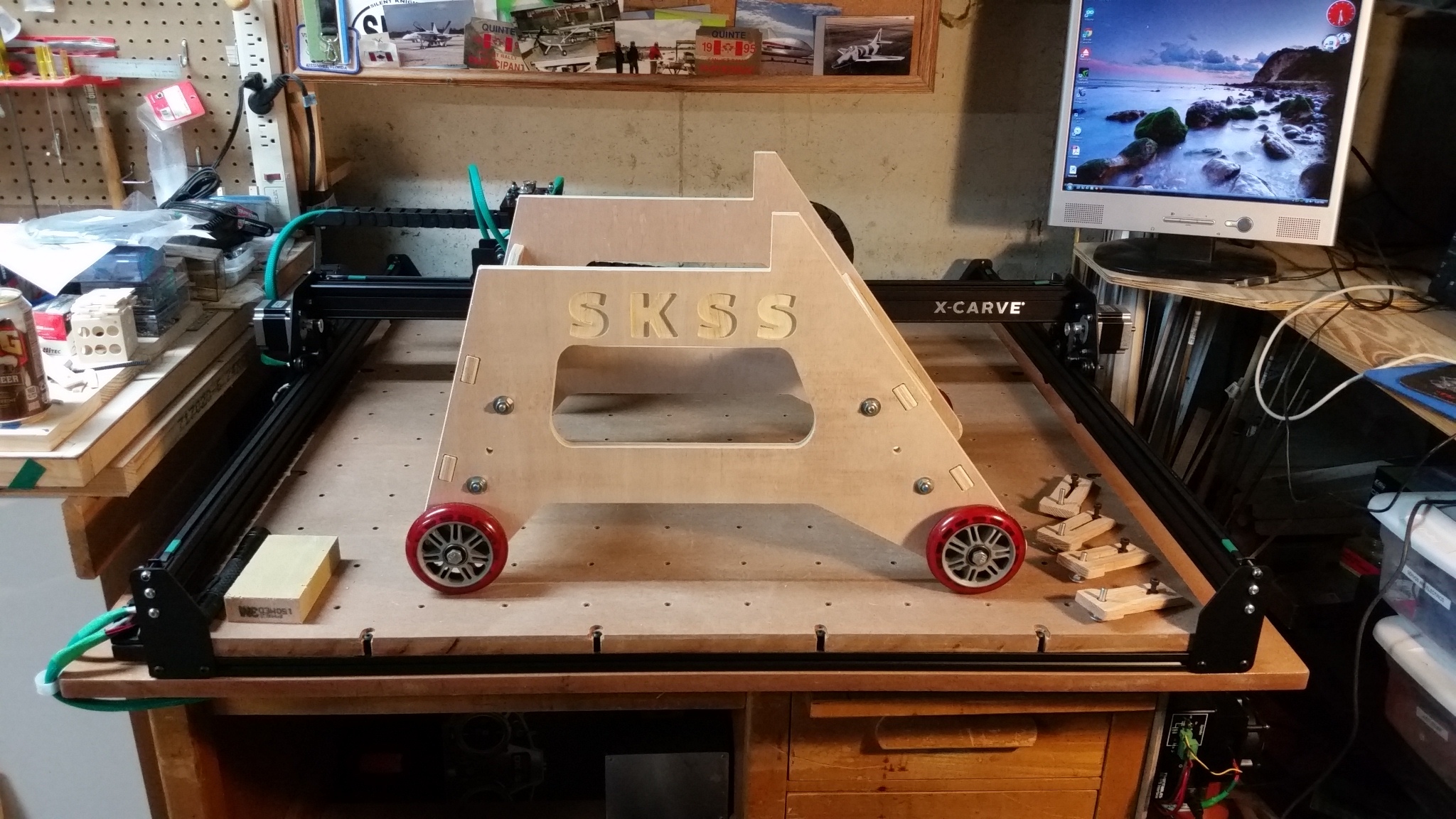 So far my machine has close to twenty hours of run time on it and the belts are just about ready for a tightening. Everything else was spot checked and found to still be tight and properly adjusted. One thing I do need to watch is the heat from the spindle, it does get quite warm/hot to the touch but never too hot that I can’t keep a finger on it (I have tough hands).

I can only say that proper assembly and patience is mandatory in setting up any machine and I am glad I took my time to make sure everything was right from the start, lets see what the next twenty hours of run time brings!

Zach, Since you are probably watching this (you are watching EVERYTHING arent you?)

In response to Antonio’s comment about a hot spindle, perhaps some sort of finned heat sink/dissipating device could be fashioned to mount around the spindle to dump the heat? Heck, if it can work for the lawn mower…

Interesting thought about cooling the spindle, I had considered a fan on top to blow cooling air through the motor but that would also blow dust down into it. A second thought was a dust sock on the fan to stop the dust (similar to the dust sock on a shop vac). My final thought is an exterior fan blowing onto the spindle, may have to cobble something up to do some testing, could possibly use a step down voltage from the spindle power itself to run a couple of small cpu fans, hmm…

Right now the longest run time has been about an hour and a half but longer run times may need some type of cooling.
I am looking to upgrade in the future to a water cooled spindle if I decide to do some 3d carvings which could possibly be very long run times.

Those pins we’re soldering to G-Shield not going to arduino. Those soldered pins on the same lines have another set of pins inserting to Arduino. I soldered same way, long pins out. Holding connector lot better.

What should the header pins look like? I received my X Carve early but just now getting it put together. My header pins look just like the ones in the picture from AntonioNunez. Are they the wrong ones?

@DennisMartin
Yes, apparently they are the wrong ones but will work with a little Mguyvering.

When soldering them to the board (short side) do not put the black spacer against the board, solder the pins so that they just peek through the board. If done correctly the black spacer will rest on the metal housing when the boards are installed.
Some folks have also relieved the housing for clearance but my way avoided that.

There are several thread here about the pins but apparently no one at inventables has chimed in.

Yup, the ones in Antonio’s picture are incorrect.

I communicated with customer service about this very issue when I discovered pins on the gshield that the manufacturer had failed to solder. They sent me new, correct pins with a replacement board.

Antonio is correct that the pins you have can be made to work, In principle, you should not need to cut the housing to accommodate the pins but the placement is critical to ensure that the gshield interfaces with the arduino properly.
If it doesn’t you will be scratching your head really hard trying to figure out what is wrong.

Contact customer service to resolve this. I suspect that when that particular part of the machine was kitted up and bagged a good number of header pins were labeled incorrectly and made it into full machine kits to confuse and befuddle us. Not intentionally of course but sh** happens.

I had to cut out the housing by about an eighth of an inch to clear the soldered-on headers and allow the G-shield to seat firmly and fully. Not a big deal, but unusual given that it was one of the only spots in the entire assembly that the parts didn’t fit together like Legos.

I talked to Sam at customer success and she’s going to send me the right parts. Yea Customer Success again!!!