Finally together... Upgrades were planned, Mistakes were made

Purchased my X-Carve a little while ago, and finally got around to assembling it this week. I had some upgrades planned, some of which worked out, some which haven’t yet.

The first was to upgrade the stepper motors to 269 oz, shielded cables, and better(?) belts (GT2-3M from Openbuilds). My first mistake was here… I got everything I needed, but I ordered pulleys with the wrong bore size. I toyed around with the idea of cutting off the pulleys on the supplies motors and still doing the belt upgrade, but I didn’t realize the shaft on the motors are round. I have the correct ones on order, but it’ll probably be an upgrade for later on down the road.

I also planned to use a spindle, so I ordered a different spindle mount and plate (and led light ring). The plate is a bit tall, though what I’m working with right now is thin enough it’s not really an issue, but it will be later on (only gives me about 40mm total travel above the work surface). I can still adjust the spindle height to offset this some temporarily, but the other issue it causes is that I’m unable to mount the dust shoe kit. I have a replacement plate designed, just deciding on what material to prototype it out of (open to suggestions).

I have an interesting situation where I don’t have a ton of space, and everything needs to be packed up nicely in a small space at times. For now, I’ve decided to mount the machine to a piece of plywood, which I’ve mounted to a portable miter saw stand, securing it with angled aluminum attached to the 20/20 extrusions on the base.

I’m sure I’ll think of more things I’ll want to do to it later.

I started out with a 750 mm Shapeoko2 and that got mothballed for a few years. I have another CNC here, so it was just a Winter project. Eventually I took the parts back out and ordered the upgrades to turn it into an 750 x 1000 XC with the lastest specs. That was better, but not as good as I wanted, so I went further with a cnc4newbies Z axis, Y axis risers, Y axis stiffeners, and 9mm belts/pulleys. Now I’m starting to achieve the results that I was hoping for. I’m zeroing in on accuracy now which is a little trial and error in the $$ department.

Mine sits on two sawhorses with MDF on top. It’s usually pretty stable, but I’d like to secure it a bit more.
When it does some rough back and forth motion I get a little concerned about flex. I also should mention I had extra extrusion here and made a more secure base frame than what was provided. 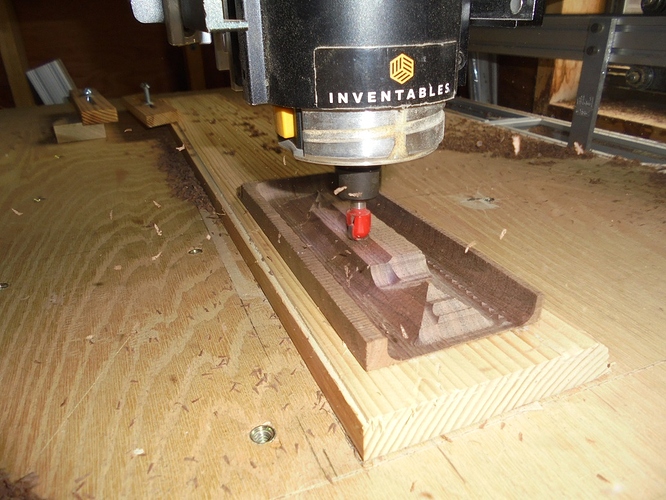 That’s my only concern with my current setup and the miter stand… it’s not the most stable (I might upgrade to the DeWalt version, I think it’s a little better). But so far it doesn’t appear to have caused any issues with accuracy, though I’ve only been milling some Lexan so far.
I would like to do the Y-axis stiffeners (and possibly risers) on mine, it’s in the game plan, especially if I can just mill them myself. I’d prefer to source the aluminum locally, but I’ve had some issues locating somewhere that it’s in stock.