Tried making two matching pieces to glue together. The wood is Pine and Jarrah (smaller strips glued together). Came out reasonably well - except I didn’t line up the grain on the circular inserts, D’oh! Think i’m confident enough to try this now on some solid (and so more expensive) pieces of wood.

I’d be keen on any suggestions on finishing off the edges (other than using a roundover bit) to make them a little more interesting. 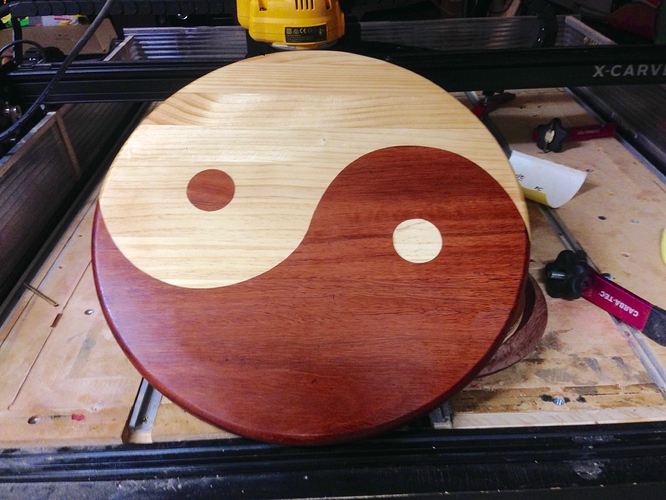 I think Jarrah qualifies as an expensive wood

I think the round over fits the piece perfectly. Nice looking piece.

I agree, round-over fits the theme nicely. A chamfer is the next choice. It will leave a “corner” all the way around the piece and a sharper shadow line. It was nice that you caught the grain thing. I even align grain on 1/4" plugs for screw holes.

Adirondack Beach Chair W/ 2 Positions: I have always wanted to make my own camping chairs. I started out with a Kentucky Stick Chair, which was cheap to build and surprisingly comfortable, but not very elegant. After years of searching, I found the...

BTW, it looks like you got the most difficult/important aspect of your project right, the pieces fit together perfectly!

That looks great as is, you could probably do that with pine and red oak (or pine and stained pine) and have it look good. Is there any chance you did this in Easel and are willing to share the project?

Knock a 45º chamfer in that bad boy and it’d be perfect.

This was done in VCarve pro, but all I did was Google “Yin Yang vector”, download and import it into VCarve and go from there.

Happy to post files, but I don’t use easel so I’m not sure what format would be suitable. Let me know and I’ll put them up.

Unusually for my wife, she actually likes this piece and wants it as a lazy Susan for an outside dining table. So Lazy Susan it will be…

I like i a lot. And suggest, surf and turf on this board. Or vegetarian v. meat for a party. Also, white meat or dark meat!

@RobertA_Rieke Here’s an easel file I threw together. I only made half the Yin Yang (I’ll let you decide which is which), since you’d cut the same thing out of 2 species of wood and they ought to fit together perfectly. It’s set up to make a 10" circle when it’s done.

Let me know if you make this, I’ve got my workshop stacked full of other projects for the next few days and I don’t have time but I’d love to see it done.

*edit for clarity:
I made the entire Yin Yang in Illustrator, perfectly symmetrical and all, but I only imported half of it, so that cutting the same thing twice out of different wood species should yield an interlocking shape as it’s supposed to.

The vector I have, for whatever reason, needs to be cut using each half. If I duplicate one half only, the fit isn’t seamless - mind you, I still had some serious clamping force going on when I glued things together.

I rarely trust things I find on the internet to be truly symmetrical or centered or anything… Unless you drew it yourself you just don’t know how it was done. That’s why I did my own. That said, these machines aren’t 100% precise either. 1 missed step during a cut, or a couple of thou of runout in the spindle multiplied over both pieces can cause some gaps to show up in an otherwise perfect file.

Anyway, here’s the svg I made in case anyone wants to fool around with it:

That’s great, thank you so much!

Thanks @Mike much appreciated. I’ll use yours for the next one I make.

I need to keep trying different timbers; the Jarrah is beautiful and relatively cheap (I’m in Western Australia where it grows), the pine is easy to work but is way too soft, and the Red Oak, while reasonably hard and nice looking, is a pain to try and sand flat & smooth.

Anyone tried Poplar before? 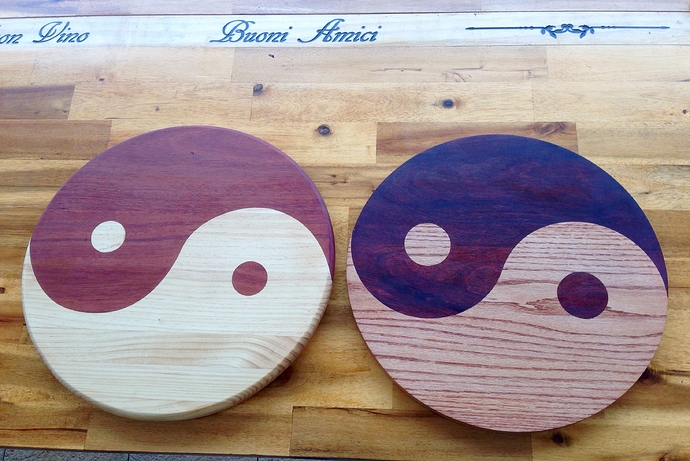 Tasmanian Oak/Alpine Ash/Mountain Ash comes in a wide range of colours depending on source. It can be very light, certainly as light as the red oak. Australian Beech is also a light brown.
Huon Pine is hard to beat but not that easy to source, especially in WA. Hard enough to find here in Tasmania.

Not sure if poplar is still grown here. It’s main use used to be for matches.

@GeoffSteer - I’ll send you a tonne of jarrah if you’ll send a few hundred kilos of Huon Pine. Preferably some nice big slabs…

It looks wonderful! How well did the pieces fit? Was there still a lot of sanding to do?

To give others an idea of what Huon Pine costs, a local distributor has a pair of slabs, about 1500mm x 1500mm, 70mm thick with a listed price of $A10,000 (about $US8,000)
https://www.buytasmaniantimbersonline.com.au/huon-pine/birds-eye-huon-pine-slab-pair

@Mike they needed some sanding and some really strong clamping to get the two halves together.

To prevent the ‘tails’ from breaking off, I joined a bunch of hose clamps together to make one clamp large enough to encircle the entire thing. This was progressively tightened, whilst I also used bar clamps to pull the two halves together. G clamps were also used to hold the two halves flat against the bars of the bar clamps (if that makes sense).

I like your version of the design because the curves are smoother and the “eyes” are a little larger. This time at least, I managed to align the grain when inserting the plugs.

Finished product is 400mm (16") in diameter. I’d go larger, however I’m already having to edge-glue planks together to get timber wide enough and until I get a router table so I can finger joint or mitre joint the edges, I think I’ve kinda gone as wide as practicable for now.