I am having trouble with my first project. As you can see in the pictures below, the bit just mutilated this one curve for some reason. I think I will use this piece anyway and just cut the loop off, but wondering why this keeps happening. I have tightened all the belts (taped the belts at the brackets so they wouldn’t slip), tuned the motors, and even calibrated the motors for accuracy (although I don’t believe this would make any difference in this case as it is just scaling), and yet I am still having issues. For some reason on some of the shapes, easel is reversing the direction of the path on the last couple of passes, and it seems to get off track when that happens. What I mean is, it will do the first 4 passes counter clockwise and then for the last two passes it will switch to clockwise. The rest of the cuts were basically perfect, so why does it act up in just one random spot each time(it messed up previously on a different curve)?

As I don’t believe I can edit the paths in Easel, maybe I just need to do smaller projects for a bit before I try such a large piece and let the belts get broken in? Any thoughts? Is Easel usually capable of handling this many cut paths?

Also, The board will not lay perfectly flat, so instead of cutting .25in deep, I raised the bit by .02in and set the depth to .29 to avoid grabbing to much material on the first pass in different areas (an extra .02 to make sure the cut is all the way through, increased tab heights by .02 to account for this). 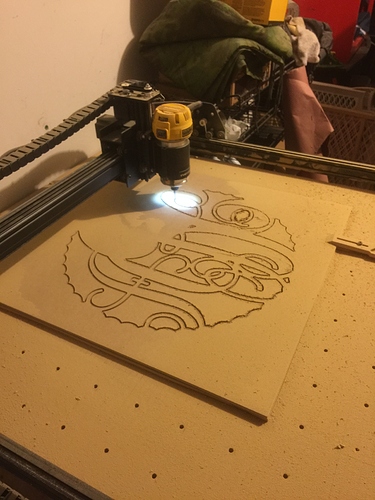 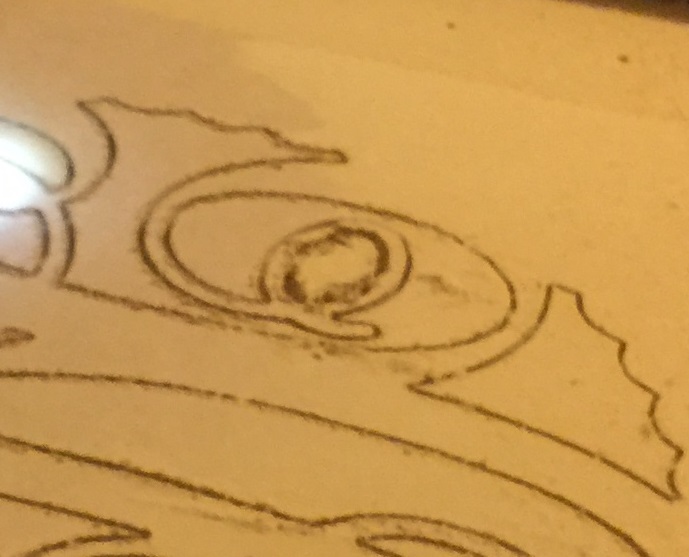 How is your material attached? I see one clamp. With an upcut bit, it tends to pull material up. If the material is not secured it can cause the bit to bite too mcuh and lose steps. Much like you are experiencing.

There are two more clamps in the back that you cant see in the picture so it’s held down pretty well, but that is a good point about it pulling up. I wanted to pop a screw in the middle before I started but with all of the paths I was too afraid my measurement would be off. I haven’t noticed it moving, but it is possible this is the problem. What kind of bit would you recommend?

Thin material, I usually just put a bunch of screws into it and use a downcut bit.

Using V-Carve, I place screwholes where it is safe and run two toolpaths, first one for screw holes, then I put in the screws…then cut my project.

It seems like with the cut depth being so small it wouldn’t even grab enough material to pull it up. I think its only when it gets off track is when it bites into the material on the side and starts tearing it up. So it seems like the base problem is still that it’s getting off track in the first place.

That is a good idea, let the machine show me where to put the screws. I don’t have V-Carve, but I can just create a copy of the project in Easel, add the holes and then delete the pattern to cut just the holes.

Have you run through the process of checking power to the steppers? It is possible it is getting off track by losing steps.

I did mess with the stepper motor power for a bit. I have the NEMA 23 motors. I was able to find the lower limit, but was not able to make the motors fail at any upper limit. I ended up basically just turned the potmeters to where the motors were not whining, but still a few notches above the lower limits. Does that sound reasonable?

It does to me.

What speed are you using on the router?

6, not sure what RPM that corresponds to.

Ok, I will try screwing it down, down-cut bit, and lower speed next time. Thanks so much for the help!

Could I use this bit?

Easel recommendation is 40 in/min, would you go higher than that?

Thanks I will try that