So, everything “seems” to be working…but I’m thinking that this should be a tad smoother. This is the default first run project. I enlarged it just a bit to fit my work piece. I have the 1000mm version with the 24v spindle. I’m thinking it has to do with the spindle being square. I used all the default setting that the project offered. I did try another project but with a slower feed rate and the chatter (I think that is what it’s called) mostly went away. Anyway, here is a closeup pic…any thoughts on where I should start?
Thanks in advance. Kevin 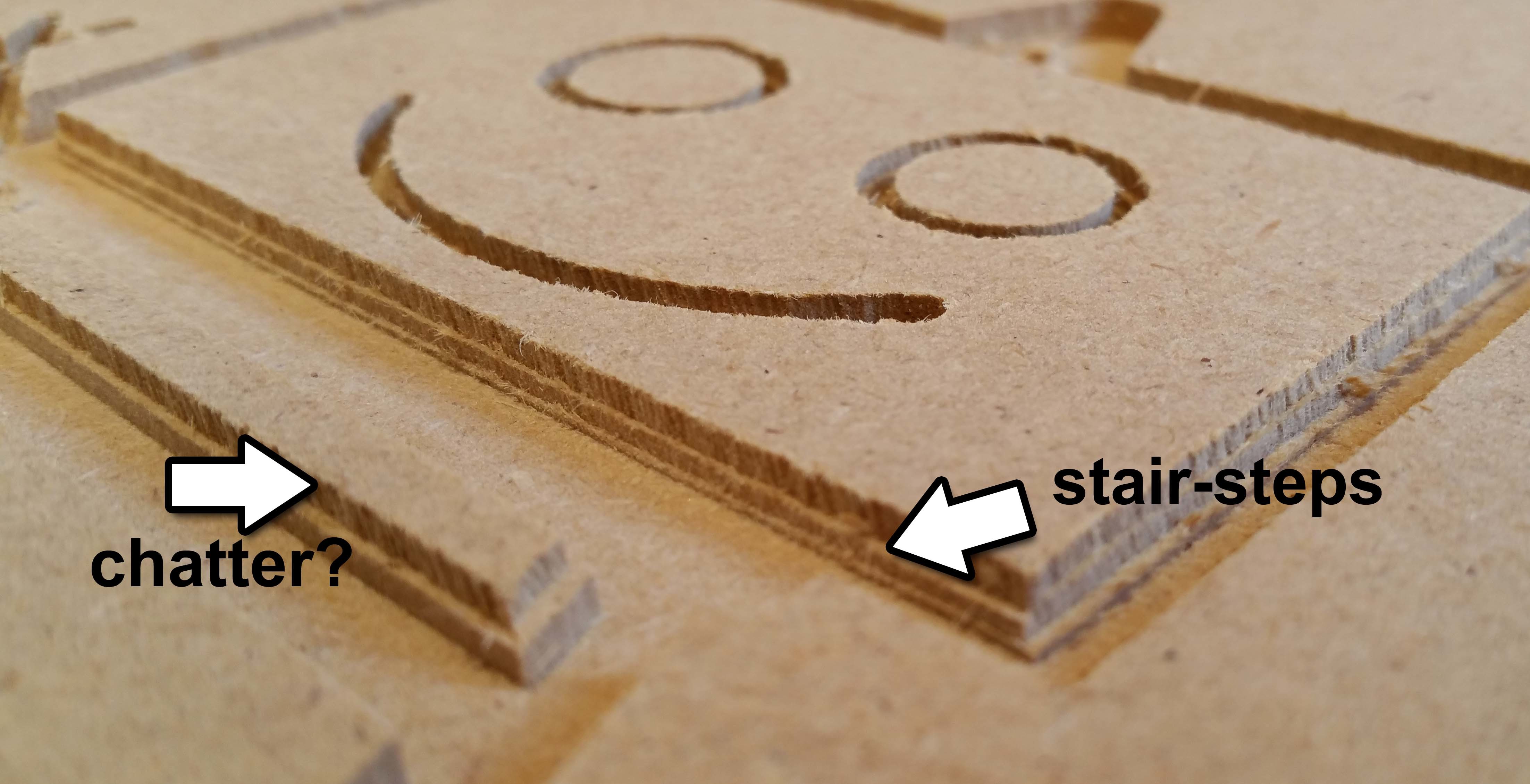 turn your “pots” up, one notch on your gshield

Yeah, typical steps are check your eccentric nuts to make sure that your V-Wheels aren’t too tight or too loose, check your belt tension, and then you’ll probably want to turn up (clockwise) the Y voltage dial on the gshield.

Chatter can be caused by having the bit chucked too far out, so maybe see if you can have the bit a little further inside the collet next time.

Thanks JkWestphal and PeterJames.
I’m definitely seeing improvements. This is what I have done so far: first, I did work on squaring up the x and y axis to the waste board. I re-checked the v-wheels and one of the eccentric nuts on the z rail almost fell off in my hand (I think I need to get something to lock these nuts down). The belt tension is something I’m a bit unsure of as they seem to be taunt enough without being too tight…just not sure if they are tight enough…I’ll have to "play with those a bit more to see what happens. And last, I did turn up the voltage on the gshield Y dial by one notch…I have left the others alone for now. And yes, I had the bit too far out as well. I guess I have been hesitant to do too much without advice in fear of breaking the darn thing. Anyway, here is an after pic of the same job after the adjustments…almost there. Thanks again for the help. 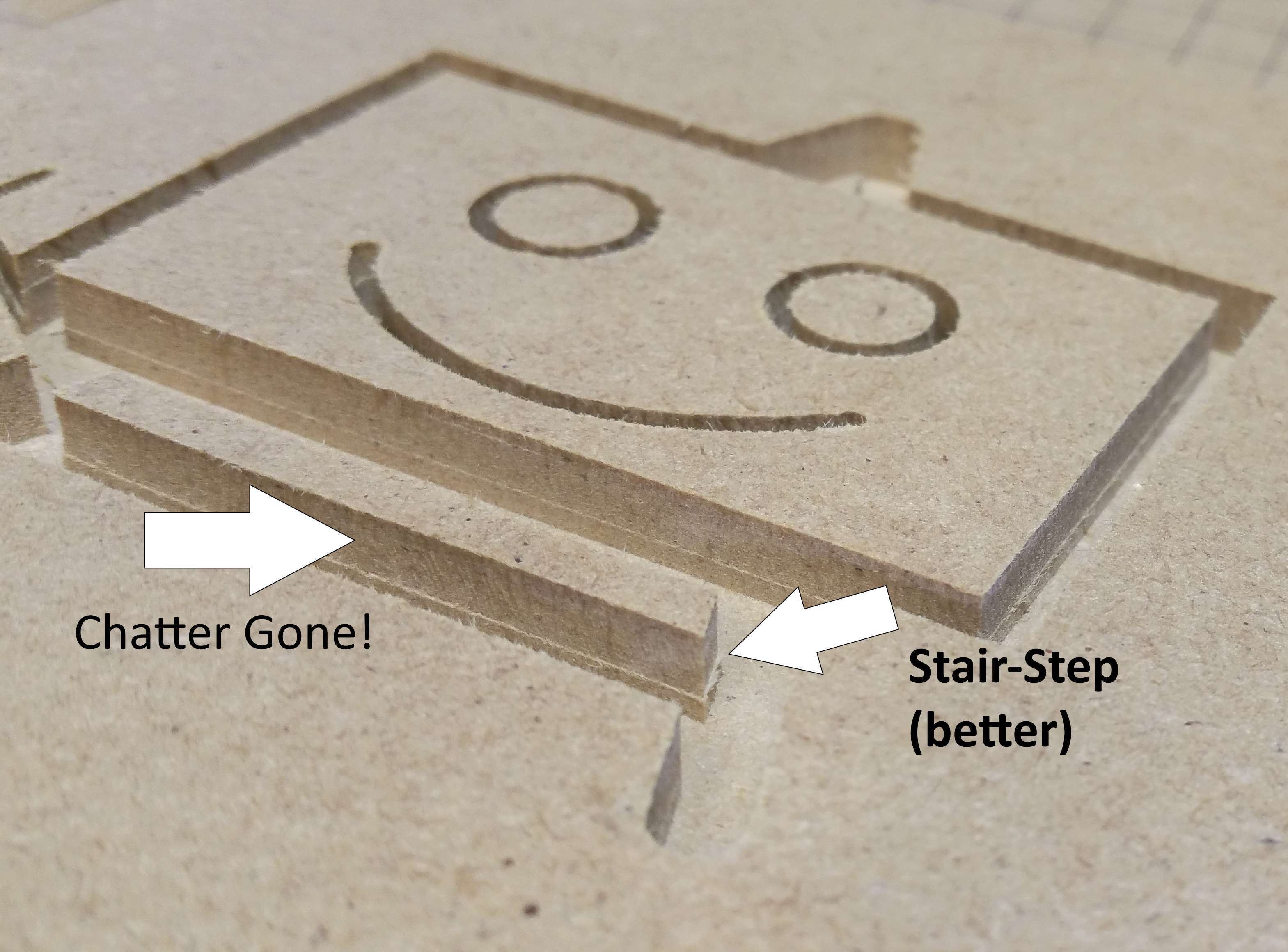 You can use a little thread locker to hold them down. Loc-tite is a popular brand.

It is hard to tell from the photo but is the stair step in both the X and Y direction? If so you might adjust the pot on both a little bit to give it more current.

Thanks Zach, I think that did it. I increased the x and y current as well as change the depth per pass and feed rate.
Lookin’ good. I guess it’s time to see what this puppy can do.

just a thought i had the other day regarding eccentric nuts coming loose.

What about going old school on those and adding a jam nut on top of the eccentric?

Zach, I just had easel tell me not to exceed 50IPM and here you are running 100IPM. Which is correct?

We are working on revamping all the speeds and feeds data in Easel right now. The formula we are testing with is:

Another cut finished now to figure out the questions it brought up.

Yes there is a walk through that prompts you to change the bit. If you follow the instructions and don’t unplug it then it keeps the zero in X and Y and asks you to reset the Z since the bit changes height.

Zach, Thanks for the reply, I must not have paid that close of attention to that. I did not see any prompt. It stopped and asked me if it was ok like it does at the end of normal carving and it retreated to the original ‘zero’ but I don’t recall any asking or prompting me to reset the ‘z’. So in the future I will in pay closer attention to easel and it’s prompts. . BTW it carved beautifully once I tightened the loose v wheel.

Zach, following is a video I made this evening trying what you suggested to me. It is mostly self explanatory with included narrative. I never did see a walk through that prompts me to change the bit or to reset the ‘z’ height?

Zach, Final comment on this subject, thought all night about my problem and this morning I tightened my X and Y belts and tried a re-carve. The video will explain all that transpired. So until You guys can straighten me out on what’s happening this will be my last attempt at dual carving. Thanks again for all your previous help/suggestions on this matter.

@JamesMitchell James, to be honest, I haven’t been able to understand how the dual carve thing works either. Somewhere, they need some instructions written on how to use it. You’re right, there is no “prompt” to change the bit, you just hit carve again and choose detail. That’s fine, but there is no explanation of where you should set the home point for the detail. Should it remember it? Should you reset the home, or click “use the last one” or whatever that button says, and then what about the height of the “z” axis? Where should that go for the detail cut? I’ve tried a few times and never gotten the depth right, it seems, so the detail pass doesn’t go down quite as far as the rough pass went.

Anyway, I’ve given up on dual carving for now, as well. Easel needs some documentation written for some stuff, for sure!

You should think of the rough/detail feature and two separate operations.

Set your zeros (X,Y,Z), do the first roughing job. Change the bit, set the zeros (as close to the first position (X,Y) as possible) then set the Z axis (jog the bit down till just touching the material) then run the detail job.

The work zero X and Y will be the same for both jobs unless you accidentally move either axis while changing the bit.

That is all there is to it. You may be overthinking this.

The grbl command/setting is $1=255 this keeps the motors powered and locked.

Use the Z axis jog commands to move the router high enough to change the bit, then after the bit is tight, jog it back down to just touch the work. Hopefully the X and Y positions have not changed during the bit change.