Trying out UGS for the first time and I’m getting this. Is there another step I need to be doing? 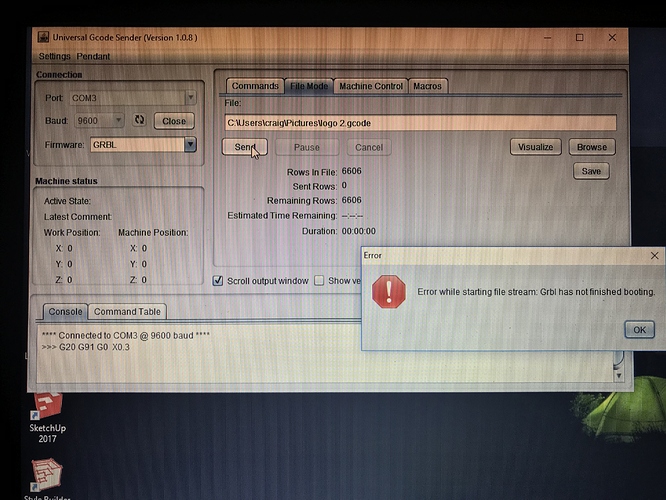 edit:
Also when you first fire it up, depending upon your controller, it will probably be in Alarm mode. Issue a $X or homing cycle to clear it.

Thanks guys that did it. To try my first carve thought I would do air carve to make sure it’s goes in the right direction. Do you load the g code and hit send? Or is there anything else?
Thanks again

Hit send to see what would happen and now I get this. 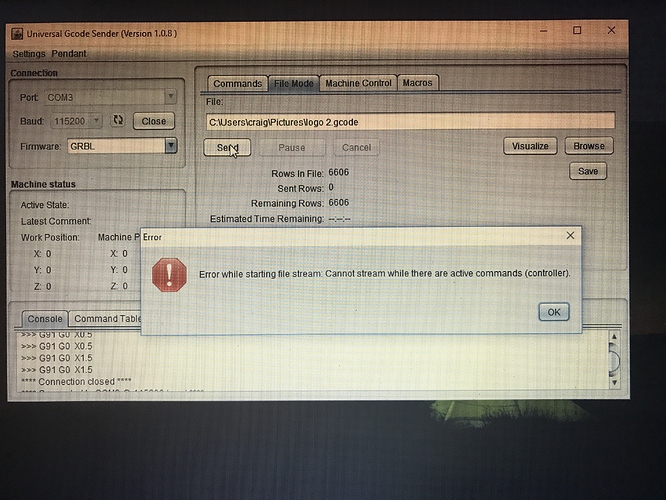 I think that message would come up if you hit the Close button and then the Open button after a send failed, because it won’t clear the stream buffer. The way around that would be to do a hard reset by hitting Close, power cycle the controller, and then hit Open.

Do you load the g code and hit send? Or is there anything else?

For simple single-tool jobs, pretty much all you need to do is set your origin with the Reset X, Reset Y, and Reset Z buttons (or use Reset Zero button to set all three at once) and then hit Send.

UGS is not without its quirks, and it definitely still has some bugs. Use caution when jogging faster than 1mm per command, since it will cache keyboard strokes too quickly and create a long buffer of jog commands that can crash the machine if there’s not a limit switch available to stop it (such as -Z direction). Also, I have discovered that sometimes after completing a job, the jog Step Size displayed in UGS is not the distance that the controller thinks it should move, and it moves much further than expected. I have accidentally crashed my -Z axis due to that issue, which is why I have a big sign stapled to my machine, next to my laptop, which says “DO NOT JOG THE Z-AXIS AFTER MILLING”. Performing a soft-reset (i.e. Close then Open the connection) seems to clear that problem.

ok thanks for the heads up, I’ll give that a try.