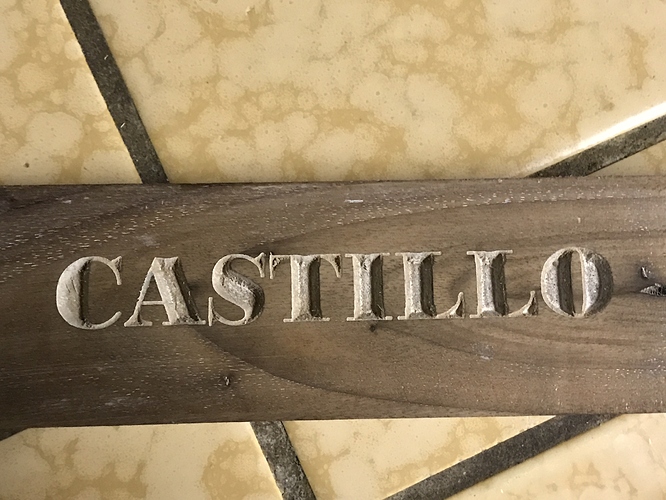 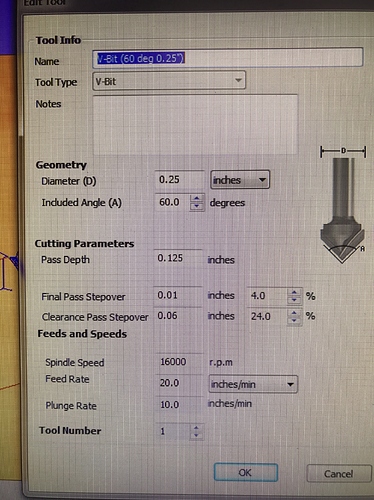 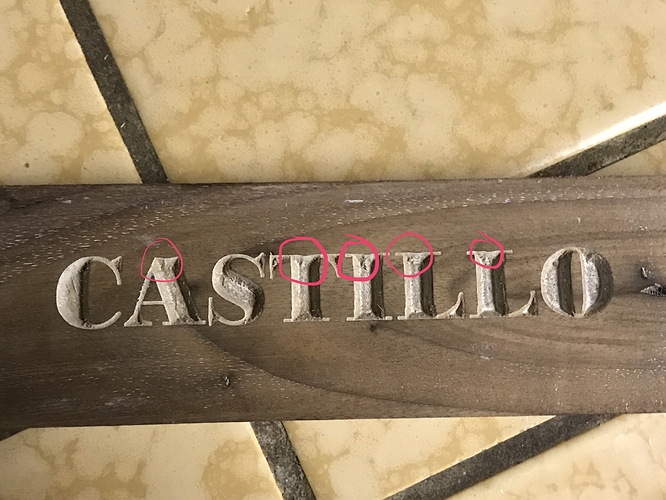 So I’m pretty pleased with my first V-Carve the only issue is the little indent that’s not being cut on the top of the the letters. In suggestions? I put my cut settings if there’s something wrong or any suggestions that would be great!

This looks a little fast. Is that oak? I normally run the text at about .8 or .9 for pass depth. It doesn’t look like a smooth cut. One of the hints I got in the Vectric forums is to run all the V-Bit operations twice at exactly the same settings. It really cleans up the stuff that might be a little ragged. It also gets off all the little hanging bits. It may take longer, but you get really nice, clean cuts on the V stuff. It save a lot of time on the sanding end of the job. I’d rather have the machine work twice as hard, not me.

I put all my V stuff on separate toolpaths, so if only the text, but not the art, needs to be run a second pass. Also, when I use masking, a second pass usually cleans up most of the edge frizzies on the mask.

Inventables had to replace my v-bit set because they were ground incorrectly from the factory flat on one side up near he tip. 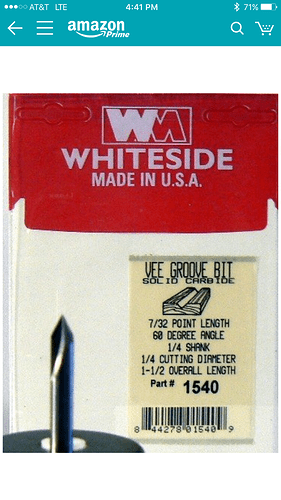 This could be an issue. Without seeing the bit I do not know for sure.
Looking at your bit settings.
your bit is not .25" for the Diameter(D)
I got this wrong my first time too. The bit shank is .25" but the diameter of the overall bit blades is what you want. Look closely at the pic.
The width should be from the top portion of the blade to the other side.
I have a 90° bit that is .5" wide but the shank is .25"
Phil has a tips thread that explains it very good.
https://discuss.inventables.com/t/phils-help-documents-and-tutorials/29460/185
Make sure your bit settings are correct.

The Whiteside bit is best type to use for some smaller text and if you look at it the diameter is the same as the shank diameter.
If your using a v-bit with the blades wider than the shank then what I said above is what you need to correct.

ahh then the size is correct.

Do you just run the file twice or is there a setting in vCarve that does it twice?

I separate the toolpaths that I may want to run twice. That way I can just HOME, then SEND the same toolpath. I use a paint mask for a lot of my Vcarves, so this also cleans up any ragged edges on the mask. If the Z looks a little thin and light, then I may lower the Z about .005 inch after the HOME, reset the Z to this new depth, then hit SEND. This is not production, so I’m not worried about the time consumed. I’d rather let the machine clean up the carves instead me doing more sanding.