Curious if anyone can offer some context to why im having this issue with font corners. See picture below.

I’m using an Amanda 60deg zero point v-bit (45707) and the font in this particular case is ‘Questrial’ although i’ve ezperienxed the same issue with other fonts as well. Depth of cut is .03 and stepover is 1%

In this particular case the letter will carve out and then easel sends the bit back around finish each corner. 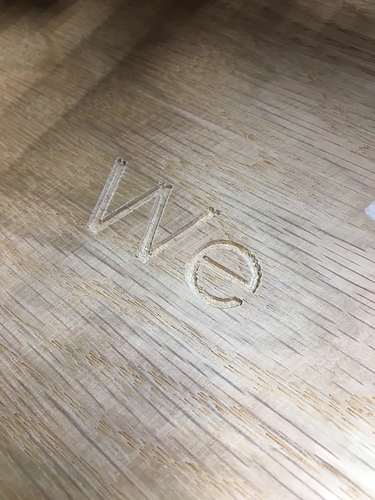 The problem is, you are setting a flat depth to a Vcarve, but the font you are using needs to go deeper to achieve the lettering.

If you want a shallow letter and do not care if its vcarved, I would just use an endmill.

I don;t think it matters what depth you set, it will go back and do a 3d carve to sharpen the corners.
The easel V carving can seem quite in-efficient with tool paths.

It is always the most noticeable using a 30 degree engraving bit but I have seen it on larger bits as well.

I never got around to reporting / asking about it. 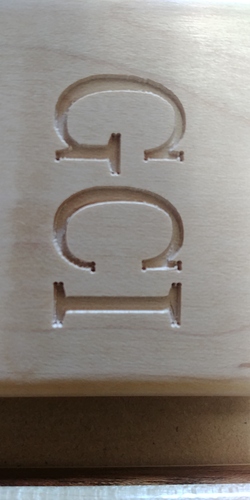 @SamB @DebbieLee How are you zeroing your Z axis / bit?

I believe Easel converts all curves / arcs into polylines which results in some extraneous movement such as you describe.

The only CAM tool I’m aware of which does G2/G3 arcs for V carves is Vectric’s line — this results in a smoother toolpath, and crisper appearance, see: https://www.researchgate.net/publication/256417308_Curved_surface_machining_through_circular_arc_interpolation and http://mae.engr.ucdavis.edu/~farouki/ijmtm99a.pdf

Also I carved two of these for the customer and both were identical. I just used a carving knife to clean it up but I wouldn’t think this should happen.

Sorry, i have never used Easel. I dont think its a true Vcarve program but I could be wrong. I dont see this issue with Vetric software.
But I have run into depth issues on lettering if my depth is not deep enough

Do you have a project or gcode you could share?
Is it consistent?
I think it looks like you’re carving too deep. The smaller the v-bit the less it will impact any wider areas, so the corners will stand out.

It kind of looks like a tapered ball nose is being used as a V bit. Or the angle does not match what is entered into the program.

No The project is gone or I can’t find it anyway (we have hundreds of projects stored). It was just a simple initials carve on a pocket business card holder.

These pictures where from a few weeks back. I suppose it is even possible there was a bug and it has been fixed.

Gotta say it would be nice if Inventables kept a change log or something that informed us when things where changed or fixed.

Thanks for you reply!

It was a 30 degree vbit / engraving bit from Amana tools that was used.

I am not familiar with that brand, however I have a Freud engraving bit and it has significant flat tip. I think it would have like results. I would not use it for V carving. I do not understand how it is intended to be used and never researched it. It came in a pack of 6.

Debbie does your bit have a significant flat tip?

Did you ever find a resolution to this issue? I am having the same problem and can’t seem to get rid of those “finish” corners. Everything is perfect right until the end when it does that.