For upgrading steppers the old model is better

I will say when upgrading the steppers the older model of x-carve (I have an original 2015) the barrier strip make it so much easier (thank god since that era has a solid drag chain so no way to open the chain to thread wires. While installing is probably initially easier with the connector style that newer machine have, unless the upgrades have that connector on them, the barrier strips are so easy to change out motors. For the big 269oz steppers I just threw on some sleeving and heat shrink and crimped on the lugs, and 2 minutes later was connected. 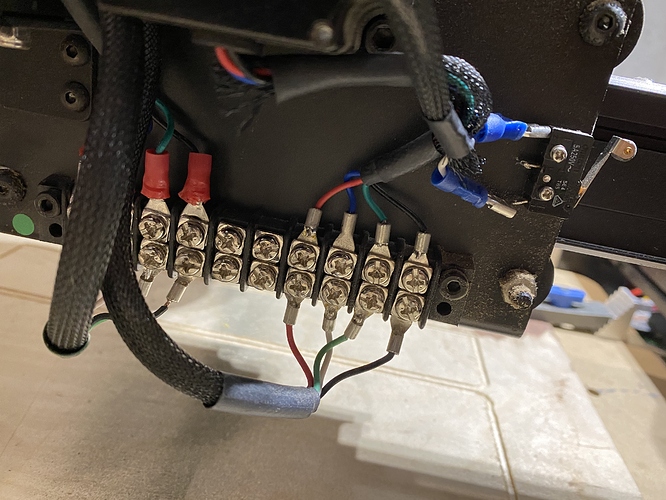 BTW that is just camera angle, the x-axis stepper wires do not drag down near the workpiece.

I dont have an Xcarve myself, but the performance boost I had when going to 269oz/in steppers was massive, even more when I bumped the PSU voltage up to 48V

I use 1605-screws though, the the machine probably weigh in at 150lbs - but it will slide on my table if I try to hold back the gantry

when I bumped the PSU voltage up to 48V

So my plan to use a Tesla P100D’s Ludicrous mode PSU is a good idea? When I have to go to liquid cooling on my steppers I know I have reached sufficient torque!

w I have reached sufficient torque!