From the ground up, DWP611 PID Spindle Control

Hey gang, my first post here. I’m an engineer that tends after fuselage assembly machines all day, when they’re behaving well I need something to keep my hands busy, the latest effort is a PID AC motor controller from scratch, looking squarely at the DWP611.

Becuase it’s something I want, I’d like to gauge interest to see if it’s worth my time to do a professional job on the documentation and maybe offer product later on, keeping the documents open-source of course.

Things I’m not sure about yet:
-Motor winding over-temp shut-off.
-Manual control via encoder or pot.
-How custom to the current gen DWP611 I should make the tachometer.

What do you think would be nice to include? An actual LCD, styles of connectors, style of enclosure, a through hole kit, or SMD produced board? I’m excited to hear what people are looking for, and participate in a forum again; it’s been a number of years.

The technical lingo is Greek to me but I would like the option of controlling the speed automatically based on the cut being performed!

My understanding is that the moter is actually D.C. I think any TRIAC control is likely over complicated and would not work as well as a basic D.C. Buck down stream. I have little evidence. And yes I would follow any speed control projects especially with pid and reduced rpm protential.

D.C. Evidence comes from the reports and how toos here related to replacing the brushes. And my own experience tearing down other ac tools with speed control.

Will have to live up to the specs of this product and be cheaper in the end;

I took a quick and dirty shot of the mains to the main switch on the dwp611 and of the line to the winding.

Channel 1(Yellow) is the mains, where Channel 2(Blue) is the voltage on the winding. I had this ramped down as low as the pot will let me, as I’m stuck in an apartment without a garage for a few months, so you’re seeing just a bit of the chopped wave. The envelope will resemble a sine wave the faster the router is set to. 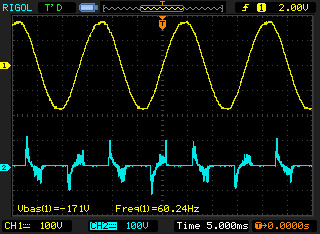 You’ll see plenty of AC tools with brushes,they’ll run on DC too: https://en.wikipedia.org/wiki/Universal_motor

That’s the plan; do people care about a display and manual control? Could really knock down the form factor if it was just remote.

For those of you running SuperPID, how often are you controlling speed via the knob rather than in your CAM software?

Ignorance is bliss… is there a way to measure rpms and have an auto adjust to keep it there? Like going through a rough spot.

A SuperPID will automatically control on/off and speed of a Dewalt 611? I’m all about having this function. Wherever it comes from.

is there a way to measure rpms and have an auto adjust to keep it there?

This is what the SuperPID is all about. Go to the site and read about it.

A SuperPID will automatically control on/off and speed of a Dewalt 611?

That exactly what the point of closed loop control is.

The controller watches the RPMs, and either increases or decreases the power to the router to keep it at that speed.

I’m very interested in a PWM AC speed control for my DWP 611. Renesas and ST micro have produced a number of app notes on controllers for universal motors. PWM control produces less noise and more torque than triac phase control.

I’ve got my X-Carve all assembled and plotting, too much fun. So I haven;t forgotten about this…

My DWP611 is still in pieces and I’ve finally found some time to dive back into this. I’ve gone with the QRD1114 to read a white stripe I put on the commutator shaft, here’s a video of the test setup I have going; the readings are so clean! The purple light you can see from inside the housing is the IR LED of the phototransciever.

After my order from Mouser comes in I’m hoping to have a prototype up and running by next weekend, stay posted.

i have been contemplating the benefit of spindle speed control lately and the thought that occurs is why?
I have been successfully cutting .25" aluminum plates at 16000 rpm with no bad side effect. i just did the math:
http://zero-divide.net/index.php?page=fswizard
and instead just compensate for the breakneck spindle speed with doc, %oe, ipm. I push a doc of .007, 140ipm, 100%oe, and have been successful as well as no broken bits and much better job times.
My thought is that on a super rigid machine u can force bits with lower rpms through materials for better chip load with lower deflection. On an x carve its not really an option. I think the work u are doing is great! But is it necessary? If so then how? Any thoughts?