Front and back carve

What would be the best way of carving a pocket in back and letters on the front of a project. two separate projects or is there a way to design it as one project in easel or vcarve.

Or you can design it as a .stl and use something like meshcam or cut 3d and do it in one job.

Unless you have a 4th axis that can rotate your work for you. But then you would not be using an X-Carve.

I’m getting ready to do something like this. Does anyone know of a good walkthrough? Do you just need to center the pins on the model vertically then when you flip, run the second project?

I will mess with it either way, but if there is a video or something it would definitely make it easier.

I would specifically be trying aspire and where I start getting confused is where the .stl file is placed in the material. You can place it in the middle, but when you edit the component it isn’t really? I’m not sure anymore. I’m losing my mind.

Here is the first two sided project I made. It is just a simple refrigerator magnet with our names one side and the magnet shape milled from the other side. The most important thing I learned from this simple project was how important it was to keep the carving symmetrical around at least one axis of the material. Then you can flip it over around that axis and use the bottom left corner of the material as your home position. 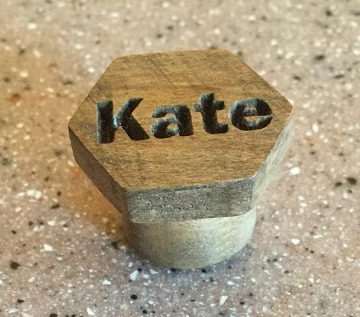 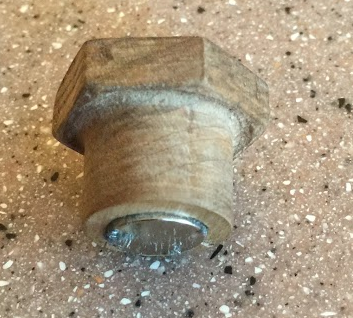 That makes sens! I like the dowel idea but i’ll just have to use another more sacrificial board on top of my wasteboard.

I have a half inch piece of MDF attached to the top of my wasteboard just so I can screw everything down. Not having to mess with clamps is wonderful.

One thing that I have done that works pretty well is the drill the dowels with your spindle through the work piece and into the waste board. I just use an 1/8" bit and then use spare 1/8" bits for the dowels.

It is then lined up on the x-axis and then I flip either direction. I usually put the origin in the zero of the world piece and it has worked well so far.

@JasonHughes I did this just yesterday before reading your post. Great minds think alike.

I tried this yesterday… I clamped a sacrificial board down, then clamped the workpiece to it. Got my pins all drilled, went ahead with the front carving, then flipped the piece over lined up the dowel holes with two .250 inch drill bits flipped upside down, clamped, then removed the drill bits.

Now is where I run into my problem. I’m trying to carve a 3d object out of the middle of a board (.75") I think that the model is only about a half inch thick total. This means I have to import the model, face up, create toolpaths to carve the model in the center of the wood, import another 3d model (the back side) and create the toolpaths for that.

What I think I"m running into, and i’m not sure yet because I haven’t had enough time to play around with it (i was using a bit that was too shallow and it tried going too deep on the backside only an issue because the bit I had wasn’t deep enough.) is that the top is so deep, and the bottom is so deep, that’ll make the model that much thinner.

In aspire, this is very confusing for doing two sided carving on a component/3d item.

I really need to find an explanation on the difference between when you import the model and the model placement, vs the ability to edit the model height when inside the component menu. does this make sense?

I don’t have Aspire but I am using Fusion 360. Yesterday I carved a chain link from the middle of a piece of oak. The oak was 3/4" thick and the finished link is about 0.05 shy of that. What I did was set the bottom height of the tool path at the center of the work piece. This way the bit only went half way through the piece. I then flipped it over and cut the same toolpaths again to make the link. Obviously this doesn’t work if the model isn’t symmetrical on the z-axis.

I would think you could do the same with the bottom height being the place in the model that you want the bit to stop and then stop carving from the other side. Then you can send another set of g-code to carve the back side. Not sure how you would do it if where you need to stop carving isn’t on a consistent z plane though.

I may just use fusion 360. That’s what I modeled it in, I’m just learning to use it. Not familiar at all about tool-paths or generating g-code or anything like that in fusion though. I see a lot of YouTube in my near future.

John Saunders from NYC CNC has some great F360 videos with lots of CAM tutorials. He is using a Tormach mill but the CAM process is still the same. I’ve learned basically everything from him and a couple of Autodesk’s tutorials. I have worked with 2d cad in the past, but never cam. I feel like I got a cheat code by being able to watch these videos.

Here is my chain link with no sanding. 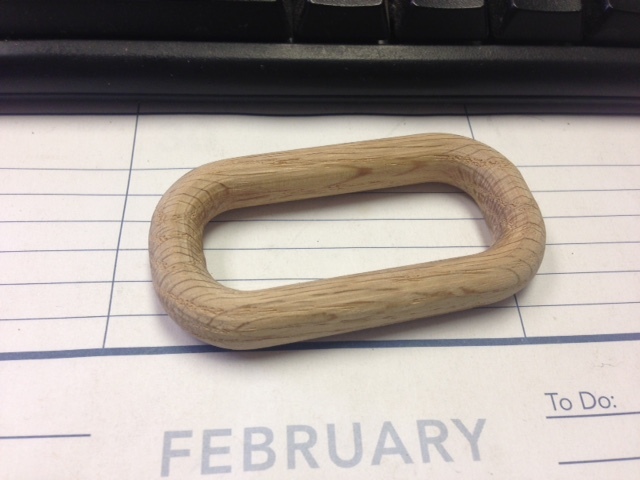 That looks awesome! Yes, I have been watching his videos now for a couple of weeks. Super stellar videos, and very informative! I just don’t get to see a lot of the creating tool-paths how to’s. I’ll research it some more now though for sure!

Here are the videos that showed some 3d front and back carving along with some CAM stuff.