I have had a reoccurring problem when exporting gcode from Fusion 360 using the Easel post processor where it adds a G0 command in between each operation. This causes the spindle to hit the Z+ limit and freeze, requiring a reboot of the GRBL shield to start up again. The line of code at the end of each operation causing this issue is “G0Z0.6” by deleting the “G0” in each of these lines the program will work as intended. Does anyone know why F360 is adding this and/or how to keep it from adding this in future programs? My only guess to what could be causing this is the Easel Post processor in F360.

Something else must be going on here.
A G0 move is just a rapid movement. It’s pretty typical for that to be the way retracts are handled.
Is this on an X-Carve? Can you share your grbl settings? 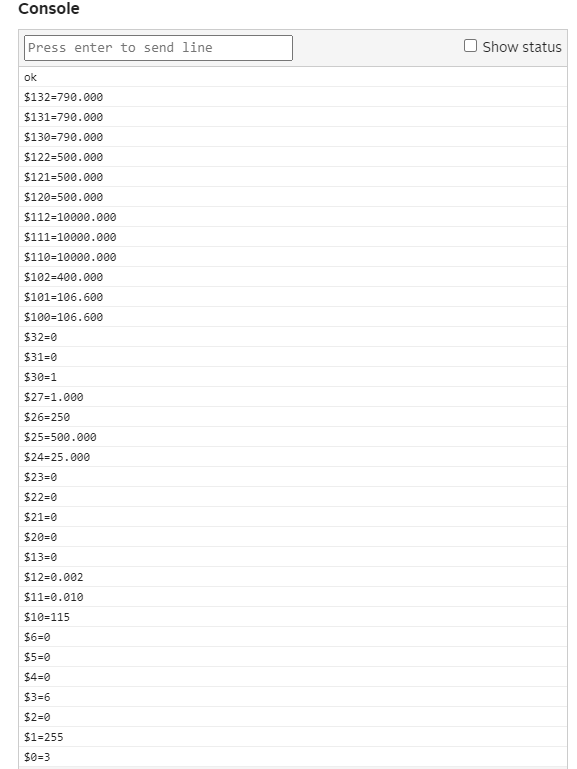 Here are my parameters I am using a belt driven workbee CNC. Perhaps the rapid movement is too fast although that wouldn’t explain the grbl to have to be rebooted to start working again.

Does it actually hit the switch? You don’t have hard limits enabled, so that’s not stopping it. Do you have switches?
Is the Z belt driven? Your $102 (Z steps per mm) and $112 (max Z rate) look really high, but I have no experience with a workbee. Check your settings with what’s recommended.

You could be causing an electrical issue by driving the stepper well beyond it’s range?

EDIT: Check your settings in the manual for your machine. They are off.

Some of your GRBL-parameters make no sense, specifically $112 and $132 ($132 only apply to soft limits and is not a cause here)
Since max rapids rarely are used when carving I would suggest you detune your values in order to ensure that lost steps are not causing issues.

I would reduce for trouble shooting purposes :

Then try a carve.

EDIT - see page 58-59-60 in your manual for suggested GRBL parameters.
Yours are considerably more aggressive that recommended.

Setting $112 to 1500 did the trick! Machine sounds a lot better when moving in the Z direction and no longer locks up at the end of a operation during the rapid movement.
As for other relevant factors on this set up I purchased my the hardware kit from BulkMan CNC with a 2.2kW spindle. The stepper motors are set to a 16uStep being driven from 4 - TB6600 that are then connected to an Arduino G-shield. The limit switches will soon be attached to the machine as they just came in the mail.
Thanks again for the help!