So I’m looking at G-Wizard to help guide me with feeds and speeds. But I’m a bit overwhelmed getting all the machine settings in place. I know there are people here using G-Wizard. Can someone post their machine setup info for either a stock X-Carve with 300W spindle or with a DeWalt 611. I’ll be switching as soon as my mount shows up from Inventables, but I’m still using the stock spindle for now.

Heh, I just downloaded the trial too, no idea where to start!

I downloaded the trial a couple months ago, and couldn’t figure it out either. Change one number and 3 others would turn red…

Definitely following this thread to see if you get some useful help on it.

Here’s screenshot of G-Wizard with some values I put in for a 1/8 endmill on 3/4 select pine.
Not saying it’s right, but it looks kinda reasonable, it came up with 85 IPS. 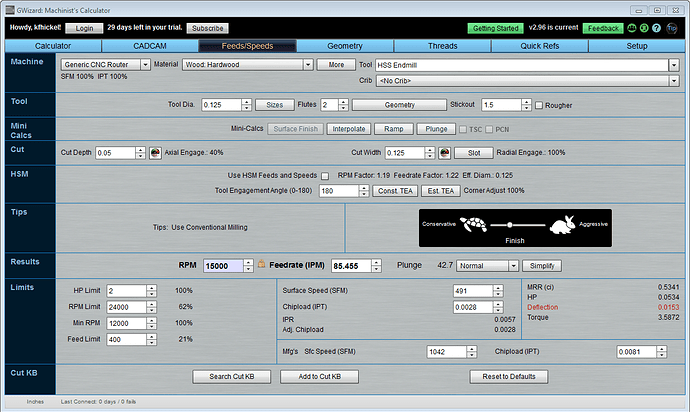 OK here are some observations from a long time Gwizard user.
1 I expect you are using a carbide end mill not HSS ( high speed steel)
2 Your tool stick out is way to much. On a 1/8" end mill you want as little stick out as possible. .75" works well
3 With the stick out of 1.5" and DOC of .05" you are getting deflection of .0153" in the red. This is very bad you will break the end mill in short order.
4 I also note you said you were using 3/4 select pine. I believe that pine is a soft wood but you have material selected as hard wood. This will make a difference.

Kelly, do you have a stock spindle or a dewalt (or something else entirely)?

hard wood. This will make a difference.

I have the DeWalt.
As far as the stick out, I don’t have the measurement handy, but I think the fluted portion of the 2F endmill from Inventables is longer than 0.75 inches.
I just put in some numbers to see what GWizard would do, I was actually cutting at 100ips with that endmill, at about 0.04 inches DOC, seemed to work just fine, but it’s something I need to understand better than I do today.

GWizard would have been a godsend back when I used industrial sized machinery. I downloaded a trial and played with it for a while, but came to the conclusion that it’s not really aimed at user of machines like ours.

By the time you make allowances for all the differences between an XCarve and and an industrial cnc, you may as well have done your own calc’s.

If I get inspired, maybe I’ll make up a calculator for the XCarve in MS Excel.

Here is an interesting post by Bob Warfield the person behind Gwizard. He has a Blog at cnccookbook.com where he posts lots of CNC related information.

Here is a link to a blog post about using Gwizard on both small and big CNC machines.
I think that folk here on this forum will find the information very helpful. Little-Known Factors That Make G-Wizard Great for Both Big and Small CNC...

Is G-Wizard best for Big or Small CNC Machines? I was recently contacted by a G-Wizard user who was unhappy that some folks on a forum thread felt our G-Wizard Calculator was only good for Big Industrial Machines and not so much for little routers....