Just delete the “.txt” from the file name before running it…

Got it to work.

It wasn’t working on my cell phone.

Did on my computer.

The next step of my upgrade is to cut some longer Y end plates. The Z axis hangs down much lower than I expected and I barely have enough clearance to cut plywood, let alone anything thicker.

So after a long break I finally had time to cut the taller end plates.
Unfortunately I clicked the wrong button in chillipeppr and instead of running the Z height auto set routine it started cutting the sample chillpeppr file.
DUHO!
Gouging into my (homemade) probe plate and snapping the bit.
Totally my fault, but so frustrating.
I have a new bit on order and should get another try this weekend.
(I probably should order a few spare bits too)

In retrospect the machine didn’t slow or pause during the cut. No slipped bets, no dropped steps. It was the bit that failed first, the rest of the machine ran just fine. It looks like the new upgrades will hold up well.

Here is the finished plate: 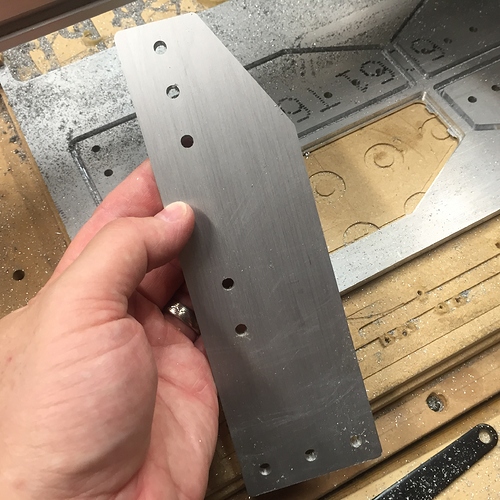 You can see how clean the edge is 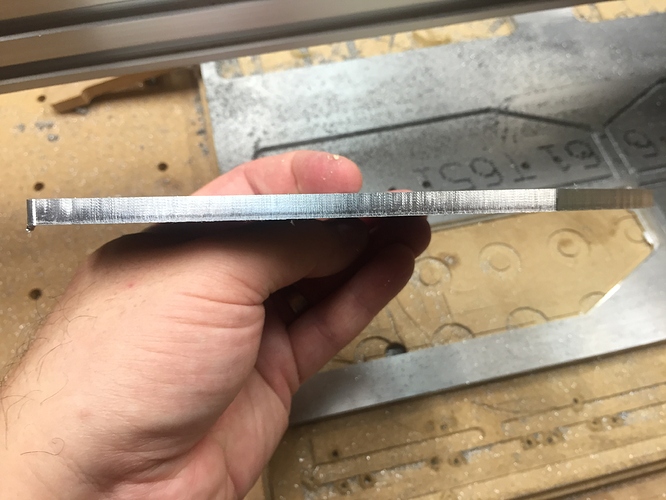 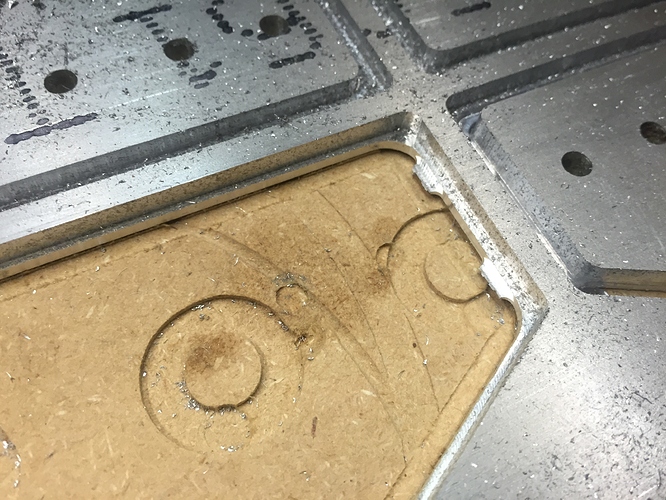 Here it is compared to the original plate 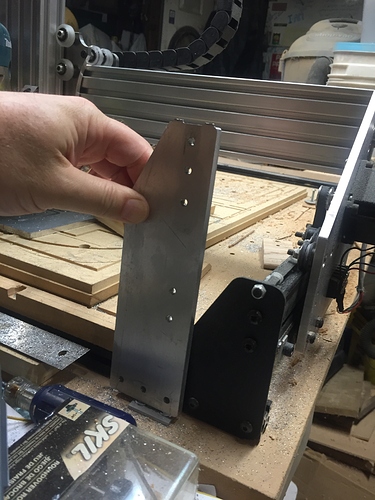 One corner had a bit of a problem while cutting the initial pocket outline and I could not figure out why. Later when I was cutting the final profile outline I discovered why.
The Z axis was hitting the clamp!

As it is I have barely any clearance: 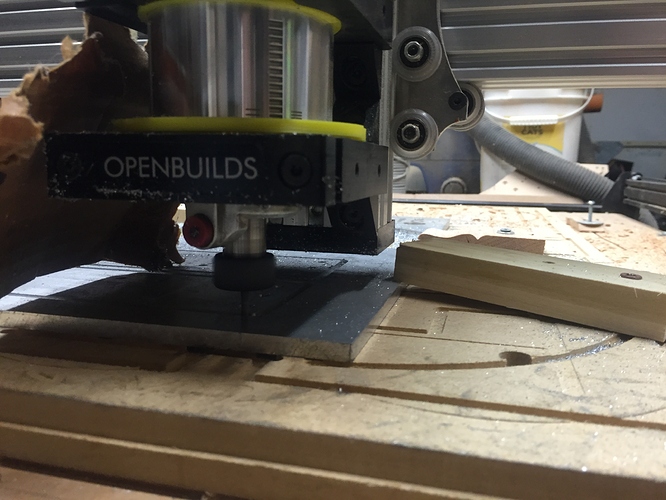 Rather than have a belt slip or miss a step it just powered on through, the gantry flexing a bit, knocking the path of bit off for a moment but not slipping in any way. Once it got past it everything was back in alignment.
Before the upgrade that would have caused lost steps and trashed the print.
So I am very happy with my modifications.

I also replaced by $5 collet adaptor with an actual 1/8" collet and that seemed to make a big difference as well. (Less runout)

The next step will to be get these installed and setup.
I also want to look into longer Y rails.

If you drill your holes first, you can use them as hold downs by screwing through. That way you don’t have to have tabs on your work piece. (too late I guess - but I am sure there is lots of aluminum milling in your future!)

If you drill your holes first, you can use them as hold downs by screwing through

Ah! I didn’t think of that. I did have the XC drill the holes first. I could have used those for hold downs once it had done so. I have to remember that trick!

A friend was over while I was cutting and asked me about cutting an aluminum part for a costume. It was good timing and I was extra happy to able to show them the finished plate

Im sure its way to late of a response now, but mine kept working themselves loose as well but one drop of superglue on it where it touched the threads solved it for me.

I installed the taller Y plates. I had forgotten tot take into account that the plate was thicker and would need longer bolts. But I was able to order up some replacements easily enough. After that, the install was fairly easy. I reused the X gantry rails as a second set of Y rails, below the first, to help stabilize things.
With the new plated in place I have more than enough height to cut on a 4x4. 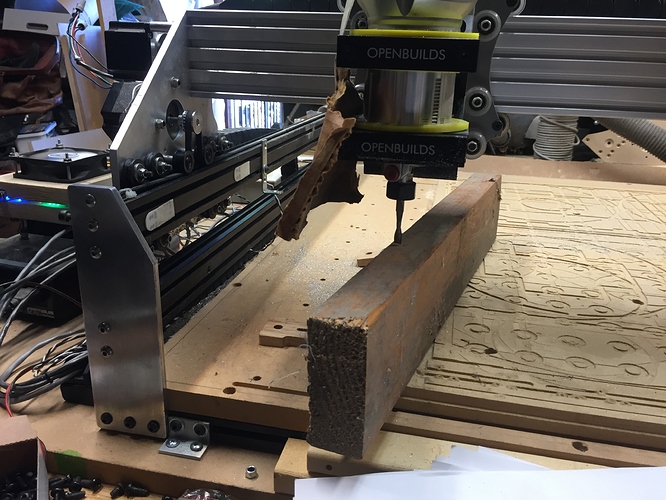 The current waste board is actual too low now. The original plan was to redo the rails under the waste bard, having some extra rails cross over the others, which would raise up the waste board.
I am rethinking that approach now.

However I decide to go the new waste board will have to be higher. Worse case I just replace the bottom rails with 40x40.

I did a quick test cut. One of the Y motors slipped a couple of times under heavy load. Probably just something out or square or calibration. Although my V wheels are starting to look pretty worn out. It may be time for some new ones.

Looks like the right height to put a removable vacuum table in there. Doesn’t need to be very tall…

I started the longer Y rail (2000mm) upgrade.
These brackets will act a join plates for the 2 1000mm lengths of maker rail, as well as help stabilize the y rail over the longer run.
There were to be 6 (3 on each side) but 2 didn’t turn out well.
On one I miscalculated when laying out the cut file and had one bracket laid out over a previously cut out area.
On the other something went wrong and the Y axis lost steps. I think either one of the hold down screws came loose and got in the way of the bit or it was too close to the edge and snagged on something?

After starting in on the upgrade I discovered that if I had added 2 more holes I would have a much easier mounting solution for one of the rails (as opposed to the L bracket I am using)
So I will probably remake these at some point. 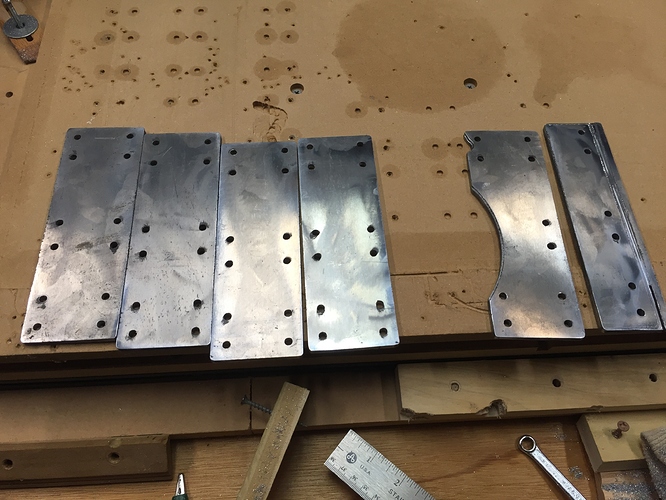 Progress made on the Y gantry upgrade.
Using the rails I got from 8020 and the brackets I cut I am assembling a longer frame. It is slow going (so many angle brackets). I forgot that with the longer Y axis I am going to need longer wiring. So at some point I will need a new drag chain.

There is very little of the original XC left at this point. Just the Y axis maker rail, Y axis v wheels and steppers motors. 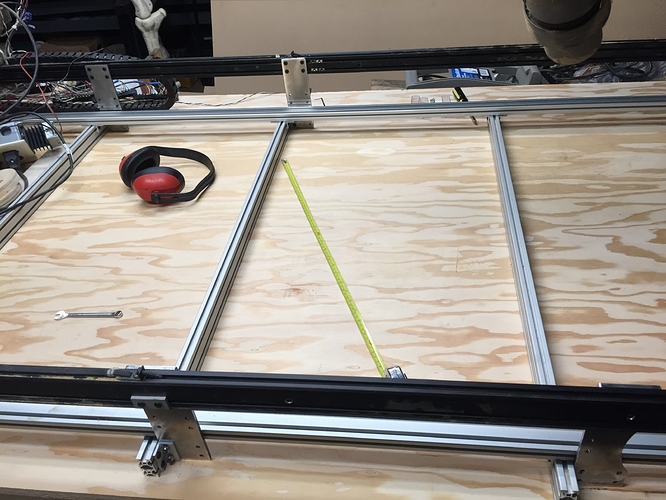 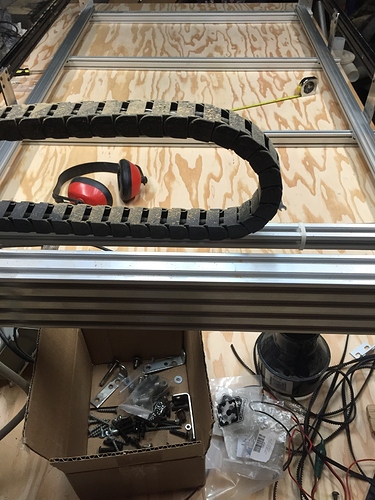 Still assembling the longer table but I was able to get the gantry rolling and run a few motion tests.

I was able to position the old drag chain in the middle of the Y axis and it seems to work ok. But my router power cord is now too short, I am going to have to redo that.

I am not sure how it will affect carve quality.

I was able to reduce the “bump” at the rail join.
I loosened the rails, centered a V Wheel directly over the junction, then tightened the rails back up. That did a much better job of aligning the ends.

I was able to get the homing switch for the Y rail working. Unfortunately the mount holes on my custom plate were a little too big for the switch mount screws. Also it is just a little bit too far back.
So I improvised with some foam mounting tape and tape wrapped the post the switch hits to make it thicker. It will hold until I come up with a more permanent solution. If I ever recut the plates I will have to adjust the switch mount screws.

I ordered up some homing switch assemblies from openbuilds that have a adaptor plate to mount the switches in the channel.
I believe I can use these for both the X and Z axis with no modification.
I could probably make my own plates easily enough but I needed new switches anyway.

I started to cut the mount holes in my waste board and discovered that the bed rails were not as squared up as I thought.

So I am in the process of loosing and re-squaring everything.
I have one side done and should finish the other tonight.

How does the C Beam compare to the 2 Makerslide and steel bar?

How does the C Beam compare to the 2 Makerslide and steel bar?

Significantly better. There is still a tiny bit of flex in the beam but it is much better than my steel bar mod. This thing it very ridged now. I think 40% of my improvement is from replacing the gantry with the C-Beam. And 60% is from replacing the Z axis with a c-beam.
You don’t have to go to the extreme I did.
My Advice: Do the maker Rail 2 upgrade and replace the Z axis with a c-beam or linear rail from e-bay. It is a HUGE difference.

I finished cutting the mount holes in the waste board and got it mounted last night.

This waste board is very solid.

On my first waste board I did the mount holes by hand and some of my countersinks were too deep for the bolts I was using. Resulting in a little bit of “give” if I pressed down in some spots.

This is a much better setup. Thought at some point I would like to do a aluminum base like Phil's New Waste Board.

Next, I need to drill the clamp holes and seat the threaded inserts.
Then make and mount a sacrifice sheet and I should be ready to carve.

I still need to make a new dust shoe and install the new homing switches (when they arrive) but that should complete this round of upgrades. (I think some kind of vac table will be the next major one)

I drilled holes for the threaded inserts. I spaced them to match standard pegboard so I can use that as a sacrifice sheet. I did a air cut test irst to make sure that none of the holes would hit the support beams under the waste board.

I also carved some gridlines, but I did the grid in metric (because I design in metric) so the lines and holes don’t line up. 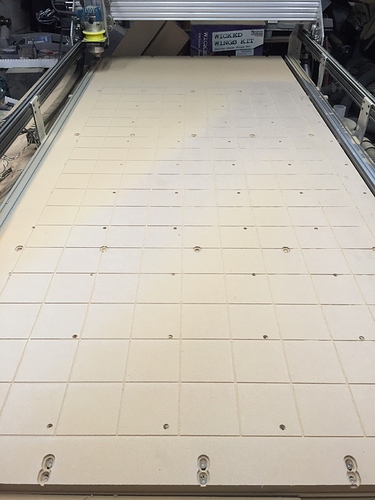 Testing running the blots through the pegboard 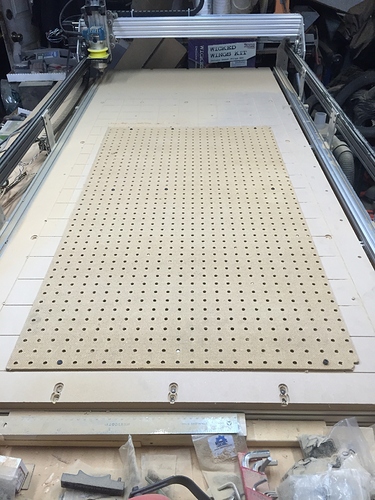 Pegboard as a wasteboard, that’s a great idea!