Continuing the discussion from [new feature] G-code sending through easel:

@AbearDesign Can you post the gcode that is exported from RhinoCAM? Do you know if it supports post processors? Here is the spec for what Easel needs.

Yes, it supports post processors. They have a ton to choose from. The one I use with ugcs is mach 3 inch.

I can post a sample up tomorrow but I am sure a custom one could be made.

I have had a couple of conversations with Quelly at Mechsoft. They currently do not have a post processor for X-Carve but seem interested in the machine. I have a phone meeting with her after the holidays.

Their VisualCam and Freemill demos are available on the website for download. Freemill allows basic parallel milling with one tool.

There is free Freemill for use inside Rhino. Can confirm it works.

Yes, and their tech support said they could develop one for X-Carve Arduino.

Hello Jason,
If you do not see the X-carve inventable (arduino) in our
FreeMILL post list then we do not have one specifically for that cnc router.
You could try one of the other posts and do a test. We do create custom posts
all the time but not specifically for FreeMILL. If you purchase our stand-alone
VisualCAM MILL basic configuration which comes with our free VisualCAD software
and a post process generator, we would assist you creating a post for that cnc
router. I hope this helps.

@JDM nice! Please send them the spec so they can make a post. That would be awesome.

will do. I have her email.

update. I decided to test importing some gcode I had to easel and it doesn’t seem to like it the way ugcs likes it.

For Easel there is a guide that outlines what it can accept. The post processor needs to respect that or it won’t work.

was just looking at that… I wasn’t looking to test that out, just saw it there while looking for something else we talked about and figured I’d try.

What I was looking for and was about to make a feature request, was what we were talking about regarding layers. Currently I don’t see a way to know where each layer is regarding order of operation.

Ah. Yea go ahead and make a feature request. There is no way to see it right now you can only order them in the edit menu with bring front and send backwards.

an update regarding the post processor. they released a pp for xcarve which works with ugcs

It should work with Easel too. Did you try it?

just tried importing it and it doesn’t work from the start.

Ah yes G3 is not valid per the current Easel gcode spec.
https://inventables.desk.com/customer/portal/articles/2258567-easel-g-code-spec

Why not fix easel to function with g2 and g3 since grbl does? Rhinocam is capable of 3 axis milling as well as 4th. I would be rather disappointed if any of the 3 axis features becomes crippled in order to cater to easel. I will be sticking with UGCS since it isn’t compromising any functionality that grbl has to offer. If you are going to contact them about catering to easel, please request that an “easel” post processor be made and to leave the fully functional PP fully functional.

Sorry if this sounds harsh by any means; I don’t mean for it to.

Adding G2 and G3 requires a code library that we don’t currently have. It’s a non-trivial task to create it but something we are looking into.

In the meantime you can go to CAM preferences from the machining browser and then select output arcs as linear segments. (refer to screen shot below). Regenerate toolpaths before post processing. Toolpath display for arcs is in Dark Blue & linear motions in Turquoise color. 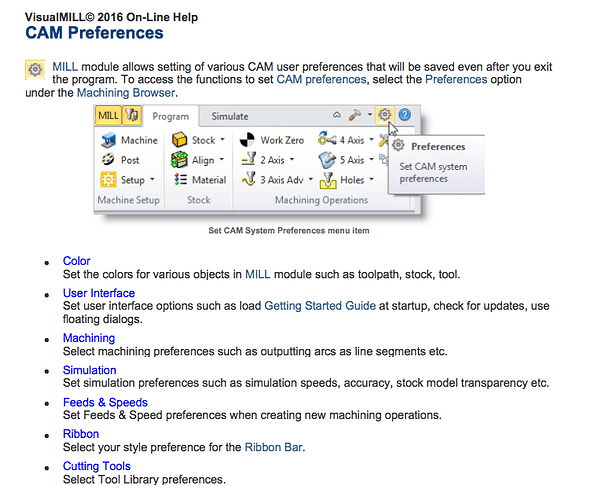