Hi all! I’m excited to share my first ever project made with the X-Carve (first guitar and fourth woodworking project overall): a Gibson SG tribute guitar made in large part with Easel. The body was carved from a beautiful piece of pacific redwood (Easel team please include a double sided carving helper!) with a rosewood neck and ebony fingerboard. Lots of research went in along the way to get all the details as right as possible. I’ll share some after the pics. 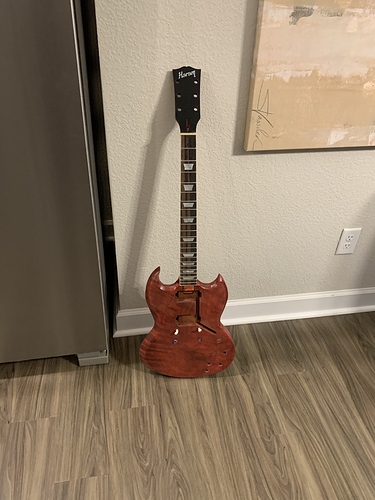 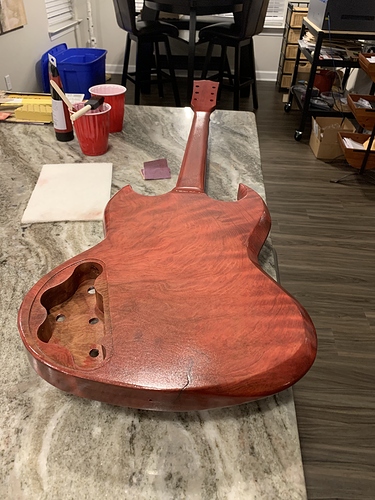 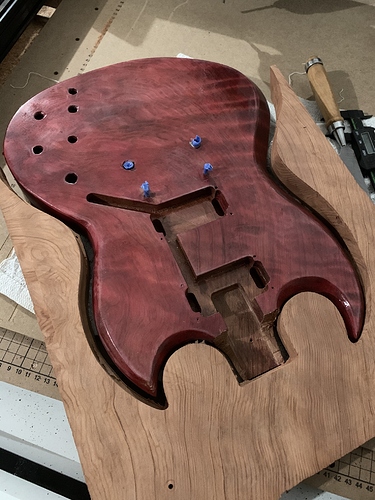 My favorite bits to use throughout the project were the spetool 1/4” downcut, the whiteside 1” planing, and tackpro 1/4” 22° vbit.

Some of the more difficult parts included:

I’m finishing the whole thing in nitrocellulose lacquer, and it’s just about to begin curing. Sadly I have to wait for that before installing the hardware but I couldn’t resist showing it off now. Here’s a sneak peak with a mocked up pickguard (laser cut plywood), and also my initial easel image! 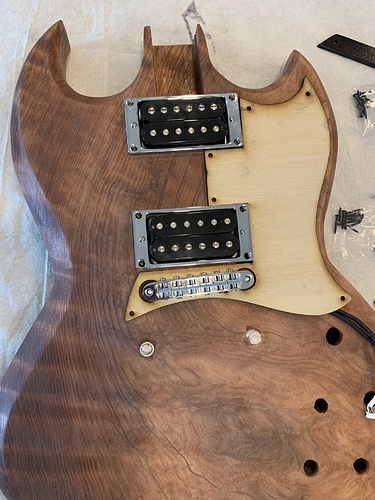 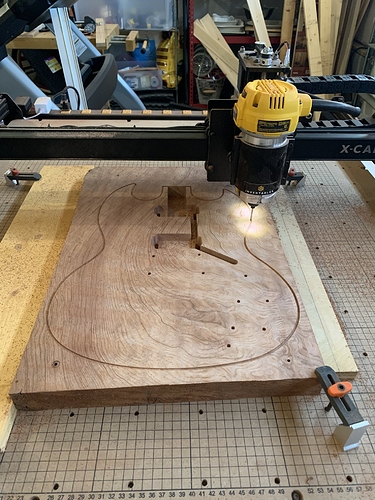 Huge thanks to Electric Herald, Woodcraft, this community, and EverythingSG for my lurking research to make this happen! I can’t wait till it’s done! Please feel free to ask any questions if you like.

Nice job. You should start to play with 3D software, as it’ll open up a whole new world of options. I use a dremel bit to locate the fret slots and then saw with the stewmac fretting system.

Nice job. You should start to play with 3D software, as it’ll open up a whole new world of options.

I wanted to… I’m pretty good with Blender 3D but Fusion360 made my ears bleed. I’m not quite sure why I couldn’t get the hang of it.

I use Rhino. It seems more user friendly. The problem is that it is pricy. I’m self taught, so I just know enough to do what I want it to do.

Here is a thread on using the x carve.

Press a button and out pops a guitar build.

I wanted to make a larger version of my last build which was my interpretation of a Vox Shadow. I really liked the way it came out, but...

Thanks I’ll check it out! All self taught here too.

I struggled with F360 and F360/CAM myself initially, but after a while some key elements clicked in place and it became quite logical

Awesome Project for sure

Wow, that is fantastic! Love seeing guitars being built with the X-Carve. Yours is much more complicated than the one I made, so kudos for all the extra complicated details you had to consider. My fret slot bit broke immediately the first time too, then I cut the depth/speed settings in half and it worked on the second try. I want to make a bass next and try the two-sided method on the body and neck. Well done!

Fantastic job. Thanks for sharing.