Well we all know this is not a perfect world so I decided to put this here as a reminder that no matter how long you have been doing this sometimes things go south. I was all in fun for testing and it can be done. more bits on the way. I was impressed with the depth of cut as things went off path a 4 flute is now a 2 flute to the carbide scrap bin you go (saying little prayer).
This all went south because of laziness on my part if I had walked around the table instead of reaching over catching my coat sleeve on the z axis this might have been a nice little project vid. 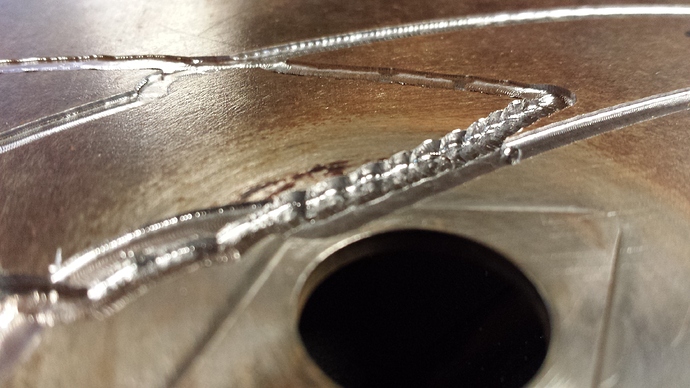 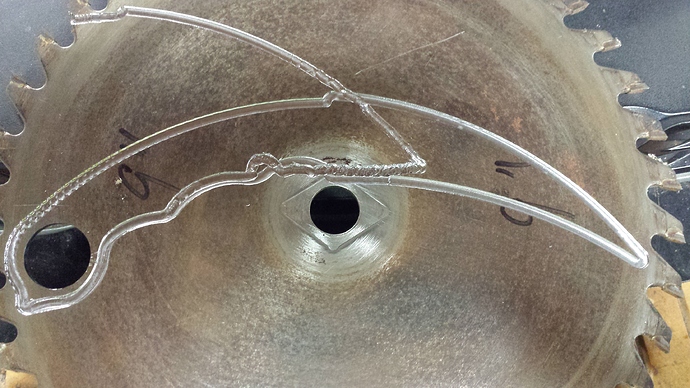 This all went south because of laziness on my part if I had walked around the table instead of reaching over catching my coat sleeve on the z axis this might have been a nice little project vid.

Failure by coat sleeve. That’s got to be a first.

Seriously though, it was looking fantastic up to that point.

Well me being hard headed this is the second time for the sleeve fail (double face palm).

That was actually doing a good job. Way to go

Does it make a difference what kind of sleeve you use?

yup I use a old army jacket for welding witch I had been doing on both occasions that I have done this. If I would just take the time to swap out coats and not reach over the machine it would have been fine. Some day I just might learn from this. But the xcarve/harbourfreight benchtop mill project is just around the corner so new mistakes await.

HOLY SAFETY HAZARD!!! Rule number 1 is NEVER wear loose clothing around any kind of rotating machine. You’ve been caught twice and you still didn’t learn? Rule # 2 is if it can catch it will. But of course you have found that out…Twice. What body part are you willing to lose before you get the message?

Yes I have spoken. After posting I thought back about all the people I know that have lost arms because they didn’t think it could happen to them. Ii came up with 7 people i know who have lost arms. Then there are the ones who lost their hands because of getting a watch or bracelet or failing to roll up their shirt sleeves and getting caught.and there are of course, those who lost fingers because of loose rings.

I know the rules all too well and even the best of us make mistakes. There is not a single one of us no matter how cautious that has not made mistakes. Over the years I have picked up body parts and zipped up body bags from work place accidents. I am sure Clyde has made mistakes to as well as the rest of us.

Yes I have and have learned from them. But remember, there are a lot of people who use this forum that have no idea on how to operate even the most basic machines and come to this forum to learn what the proper methods of machine operation are. machine safety is never something to take lightly and it is up to the more experienced operaters to set a good example for those who don’t know better.

Impressive cutting, until it wasn’t. I can’t help but think of Top Gun…“That was some of the best flying I’ve seen to date - right up to the part where you got killed.”

In all seriousness, these are potentially dangerous machines so safety should be practiced at all times but we’re humans and things happen and hopefully nobody gets injured.

This reminds me of the video of the shooting instructor on YouTube who shot his own leg with a .45ACP (I wanna say 1911). He posted it because all accident can be used as teachable moments.

That would have been a perfect opportunity to play the music from Jaws…lol!!!

I’d hate to think of what you might get caught in the machine… thanks for the heads up as well. I know who’s shop that I don’t want to visit now.

are you trying to make a knife blade?

You’re right. I WILL try to remember that. Lot’s of people who do not even know how to operate the most basic machines. Safety should NEVER be TAKE lightly. If you do not know how to operate the most basic machines then you should probably not have an x-carve. Also if SEVEN people you know lose their arms… SEVEN… it might be time for self-examination. I mean what do all these people have in common? I think an investigation is in order. How many more arms will be sacrificed before SOMEONE takes action?

It’s in the water. This besides the number of people who I know that have lost fingers and hands. What most of these people had in common is that they are farmers.

I make knives from saw blades, mower blades and other hard metals. currently around 30 of them have been made on the xcarve. But the current round of test are for a process that larger machines use to make more efficient use of a cutting tool by using 14,000- 30,000 rpm spindle speeds by use of a over drive mechanism attached to the spindle running 300-800ipm taking very light passes keeping the load on tooling very low and not requiring coolant. I am just adapting the methods to work with the xcarve because it fits the requirements the machine can provide. And other than this fail it is working very well.