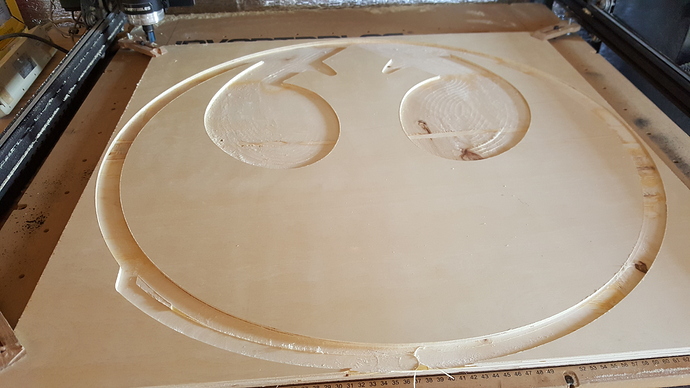 20170305_113323[53].jpg4249×2390 1.61 MB
I am cutting a 30 insignia from star wars, on the original X-carve 1000 Arduino/g-shield, using a Dewalt 611, and doing two stage cuts. This is happing on the rough cut using a 3/4" router bit. It cuts everything fine on the first depth pass of 1/8 of an inch. ON the second pass, going deeper, it cuts fin until the last curve. It will suddenly go off patch cut an alternative path, and then finish. When it finishes though, it returns to Zero. I have watched this twice, and I am pretty sure it is not a mechanical issue with the machine. There was no grinding, no belt slipping, it just started it’s own path. Maybe the X-carve is a product of the Empire? I am trying to attach a picture. The error is in the lower left hand corner. this was supposed to be a round circle.

Here is a link to the project.

prior to this last cut, I had a cut-out circle for the insignia. I removed it so I could see the paths uncluttered in the Easel preview. The anomaly does not show there, but prior, I still had the anomaly cuts.

I see in the link you posted that there are three layers of this image. I would try to remove all but one of them and re-test

Thanks. I did not see the underlying image. I did not realize there was a layer hidden at the bottom.