Going it's own way

As you can see from the photo, we did a trial run in masonite and all was well. Got about 3/4’s
of the way through the plastic final piece and it plowed through the bottom tabs instead of stepping
over them then ran amok. Any suggestions appreciated. 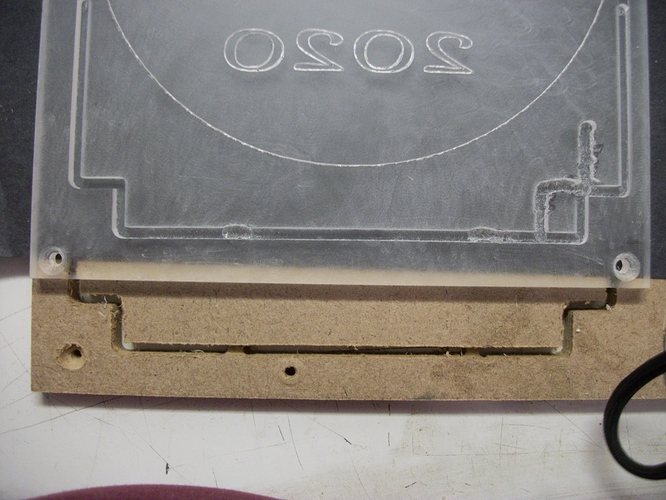 Here is test # 2, cast acrylic, 6.5mm, was almost into the waste board and took off.
Very, Very, frustrating and expensive. 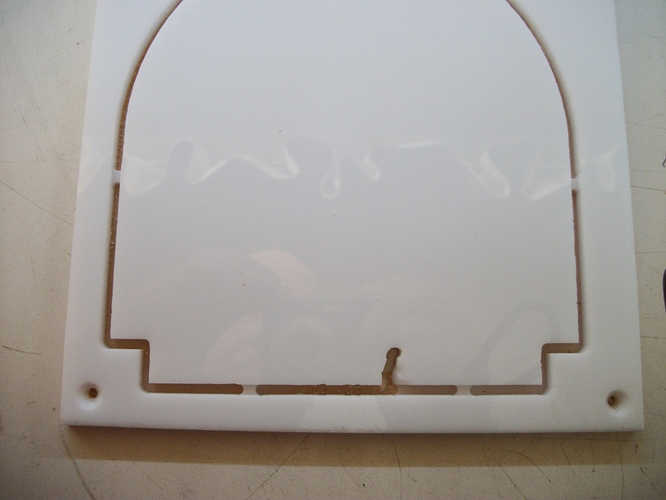 It almost seems like it got caught at some point and lost it’s location awareness. The x-y axes are of course simple steppers so don’t know they’ve crashed (unlike say servos) so they can’t tell they are no longer where they think they are? Or you have a loose belt/idler/pulley. The other day mine went bananas on my second carve of the day and the right-side Y-belt had undone itself.

Had something similar happen to me as well , found on my last pass the router caught the hold down , and sent it off course . Took a minute or two to figure it out . Thought it was fine , forgot to check clearances as the router went lower. Mine was a nice piece of black walnut . So , yes I feel your pain.

Can you give me some details on the endmill used and your feedrate? Router speed?

Looks like your steppers lost steps and thereby their position relative to design.

There are several reasons a stepper can loose steps, the most common is the load on the bit exceed what the machine is capable to do. Overloaded bit/jammed bit/chatter/hitting obstacles etc.

Thanks for responding. Bit is a 3mm, 2 flute, coated upcut, designed specifically for cast acrylic.
9K RPM, settings as specified by Easel, 635mm/m, .5 depth of cut, 200mm/m plunge rate.
How big a problem is electrical interference on stepper performance?? Were thinking of re-wiring
the steppers and limit switches with shielded cables. Any significance to the fact it loses it’s way
in approximately the same (lower, X-axis) location?? As it ran the program in masonite successfully
I don’t think there is a G-code problem though we did check and it was told to step over the tabs
it plowed through, as shown by the second pic.
Thanks again.

Were thinking of re-wiring
the steppers and limit switches with shielded cables. Any significance to the fact it loses it’s way
in approximately the same (lower, X-axis) location??

If its more likely in a specific area of your X/Y workspace I’d suspect something mechanical, wheel/belts etc. Disconnect the belts and power, move the gantry around the board gently. Do you feel the suspected area more “gritty” or the same?