Hi. I’m having trouble with Easel’s depth carving at the moment giving some strange results. I have an SVG with stacked vectors all shaded to give different depths. The problem is that Easel isn’t maintaining the layering and cutting some/all items at the full depth.

The preview in Easel looks fine, but then when I started carving it was just cutting the whole area and not leaving the features at the right levels. On another project Easel was carving out “hidden” vectors in the design that the bit shouldn’t have been big enough to carve, and were covered by “lighter” vectors above them.

I’ve attached the SVG. I have used Inkscape but saved it as optimized as it wouldn’t import otherwise. Is there a way to clean my svgs or something, or even could export as png re-trace them in Easel?

Definitely something amiss in the SVG.

If I use the posted SVG and import into Easel I get this below. Looks like the 4th or 5th layer down is wrong but couldn’t tell you exactly what without tearing the SVG file apart. 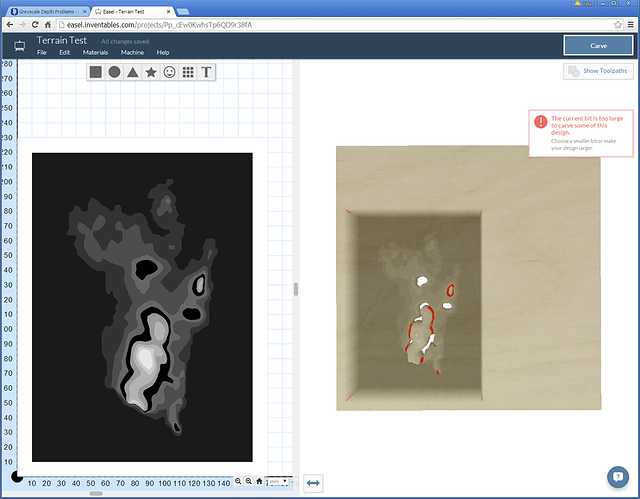 I don’t know if it’ll help, but I’ve found that I have to open the SVG’s in MakerCAM and save them from there.

Hmm, looks even stranger on your screen!! I’ll mess around with it and see what I get.

Ah, think I’ve found the issue. There was a vector that was lower than some others and had no fill. I think here lies the problem I’m having - hidden or tiny elements that are left over from editing are still there. As they have no fill, Easel is trying to cut them out full depth.

That still doesn’t solve my other problem but I’ll maybe post up separately about that if I can’t figure out that issue.

I’ll try the MakerCAM idea too.