I wanted to collect some of my projects in a separate thread. Both for my own convenience and for others to find inspiration should they be so inclined

HalAir stem from my online handle on various forums, such as RCGroups.com etc.

Disclaimer - I do NOT have a X-Carve!
Its home grown and based on MDF, Arduino, individual steppers, ACME screws etc.
More information here - My DIY-Carve

Anyways - I have several projects going on, both short and long term.

The latest finished project was getting a Z-upgrade: 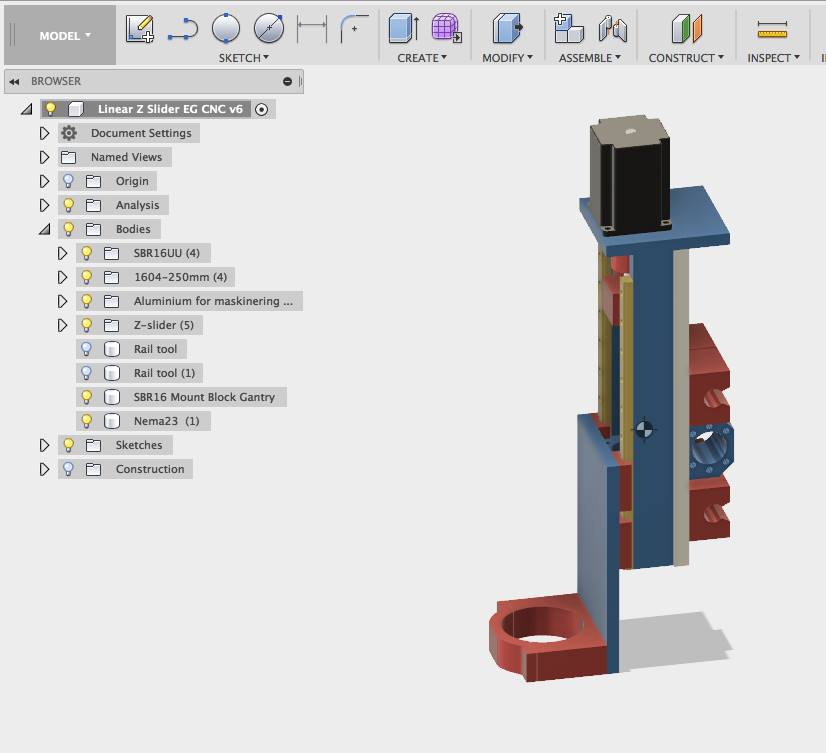 Parts emerging from the mail and CNC: 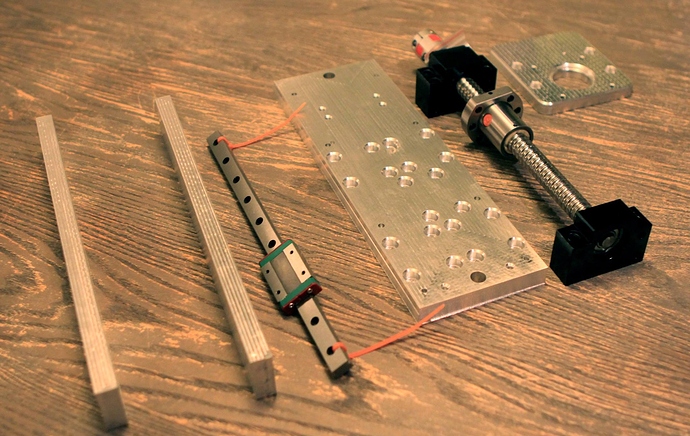 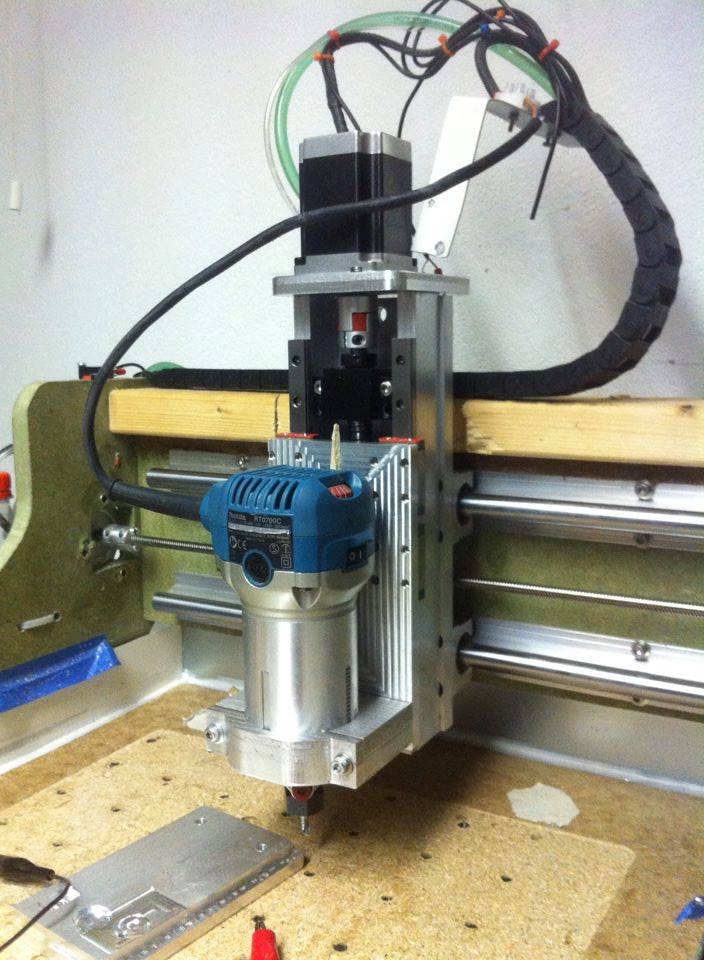 After this upgrade my system is fairly comfortable cutting Aluminium with a 6mm bit @ 2mm depth per pass.
(X-axis is the weak link now)

Long term project: A miniature turbine for RC use.
Why dont buy one ready to fly? I want to build it

I will probably need help during the process though

The first part to be milled is the diffusor shown here, its function is to divert the compressed air into the combustion chamber. In front of this there will be a KKK or Garrett turbine wheel. 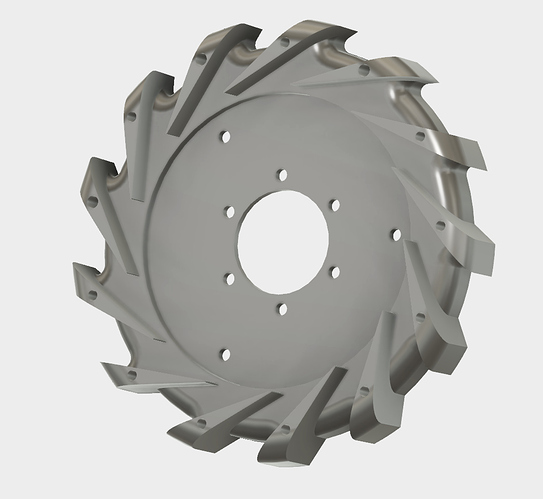 I am drawing it all in Fusion360 in order to get more comfortable with the program and also generating good CNC-code:

This is what I hope to end up with: 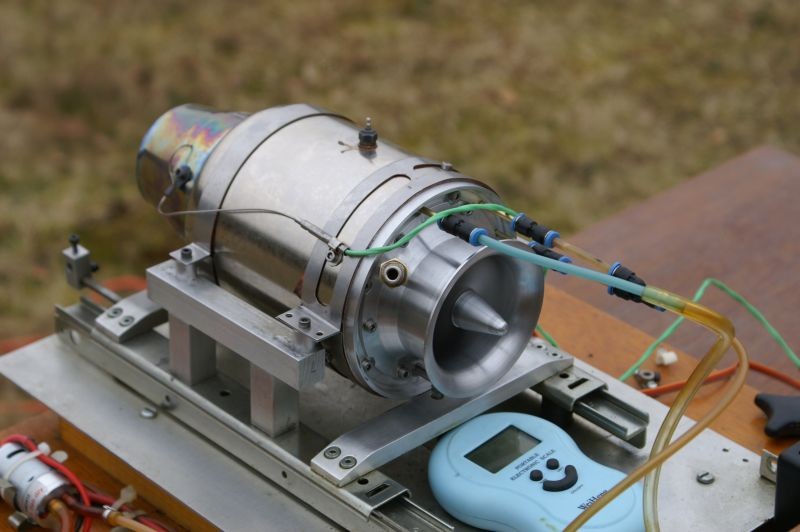 Not my render but this image show the internals of the turbine. The diffusor can be seen following the intake on the left. 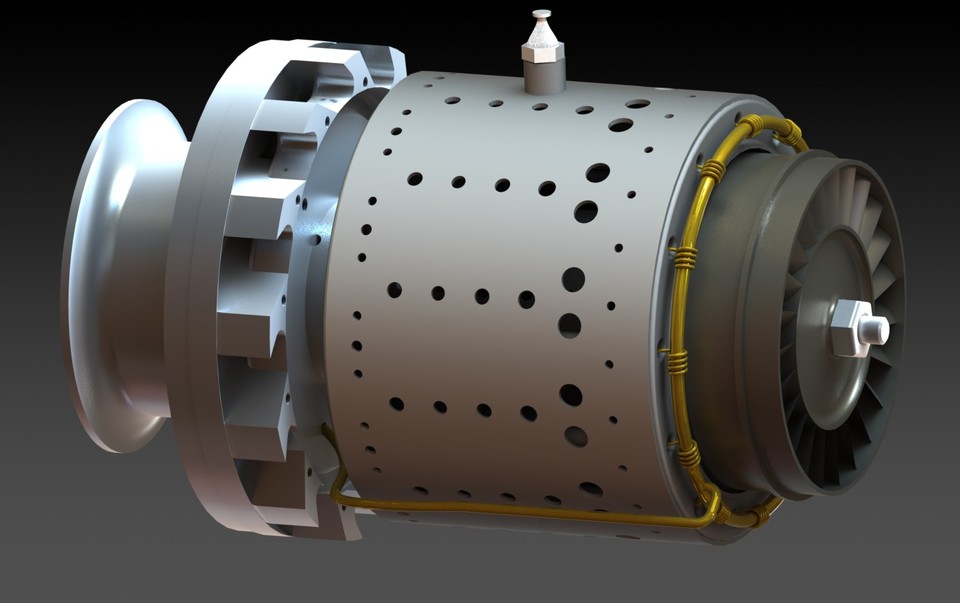 Best of luck with the turbine. I will just save up a stack of cash and send it to Wren Power Systems.

Thanks, yeah - the “smart” move would just be to save up and fork out the cash, but that isn’t the “fun” thing to do haha!
A turbine is quite a undertaking and it will take a good while. Like may other of my projects this will involve learning new stuff

Do you have a lathe to machine the rounds?

Do you have a lathe to machine the rounds?

No, but have access to one but its a cheap one and it may not be able to hold the required tolerances. Not sure, never played with one

The turbine wheel and ball bearings will be store bought, the NGV/exhaust fan will also be purchased.
The shaft and shaft housing will need to be machined in a lathe, from alu/steel respectively
The rest is less critical and the bulk of it can be done on the CNC, at least to get preshaped blanks to put on the lathe later.

This will be a learning process

I know how to fly, I know how to build a proper aircraft for it should it ever become operational - but just like having a CNC (check) a turbine have always been on my wish list too

Best of luck with the project! I often find myself doing things that don’t necessarily make sense from a time or money standpoint, but I enjoy the process and learning from it.

but I enjoy the process and learning from it.

The diffusor is the most intricate design I have made in F360 and also the most involved when it comes to the actual carving.
Two-sided milling, 8 milling strategies on the top side plus a few minor corrective depth carves, three tools used etc.
6mm 1F, 3mm 1F and 4mm 2F ballnose used.

I still need to run this part on a lathe for the finishing passes and to get it to exact dimension/round. Getting axial alignment is critical and my CNC just isn’t that precise.

MRR typical 5cm^3/minute for clearing operations (6mm 1F) and 1cm^3/min when running the 3mm 1F. Curves are done with the bull nose. 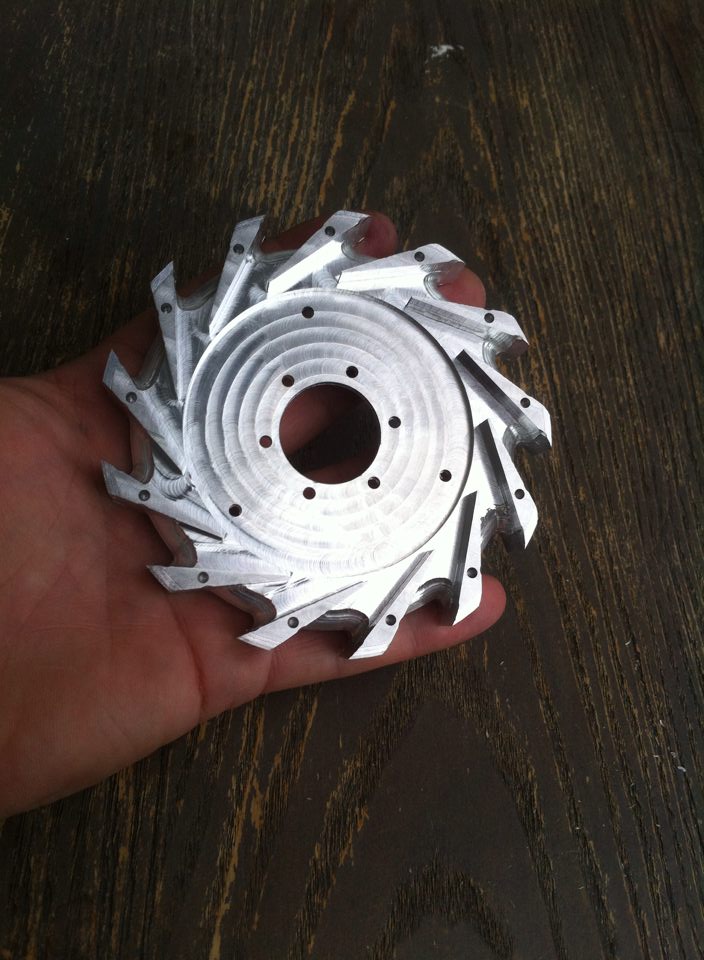 Your z plunge was awful slow. Consider stepping it up a bit. Would have saved you hours on that carve.

Your z plunge was awful slow.

Fortunately only for a couple of short cutting operations

That particular operation took about 20minutes in total. I would probably have spent more time in CAM to optimize the code so I just let it rip

Slow progress lately, but some progress at least… started using UGS and needed to get aquainted with it before committing the longer runs.

Shown here is the intake bell and compressor cover shown, both will require 2-sided milling but only one side is done so far. Need to mill a jig for them to attach to for proper alignment for 2nd side milling. 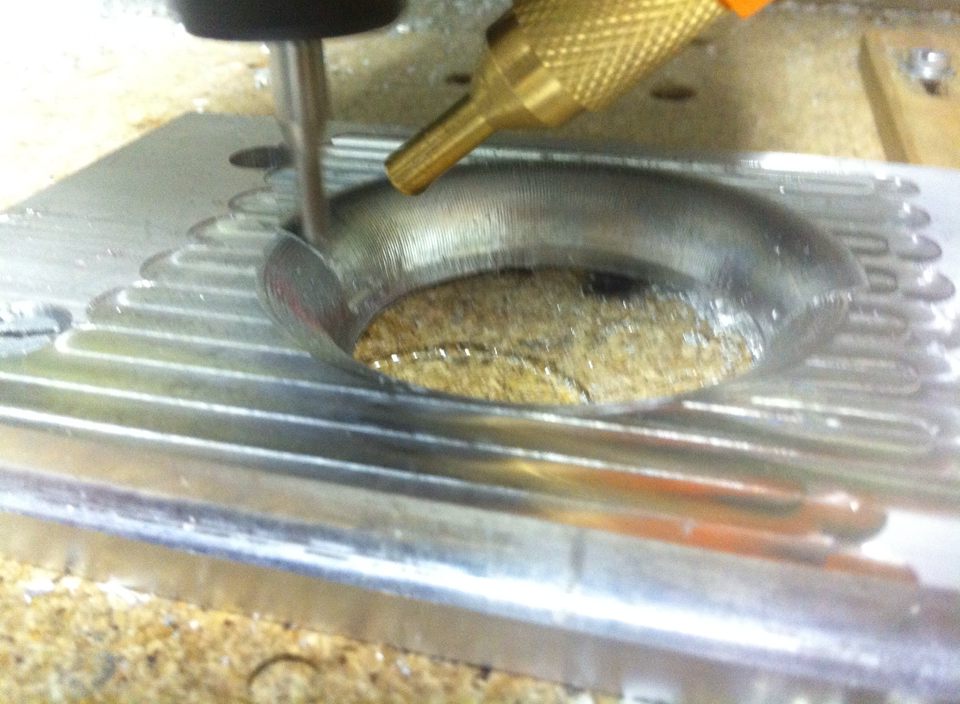 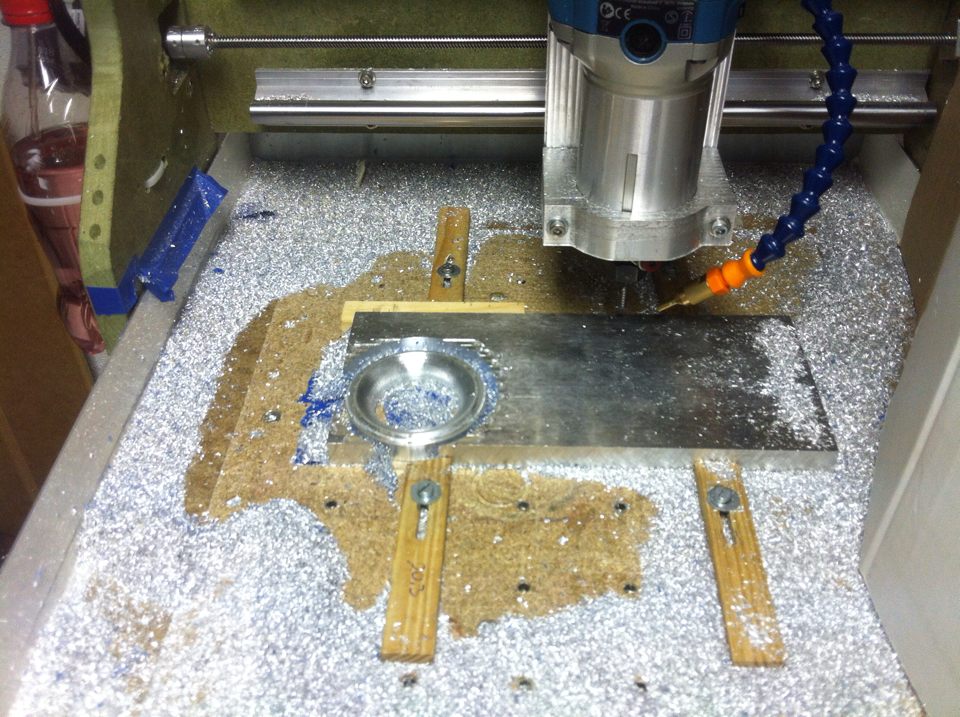 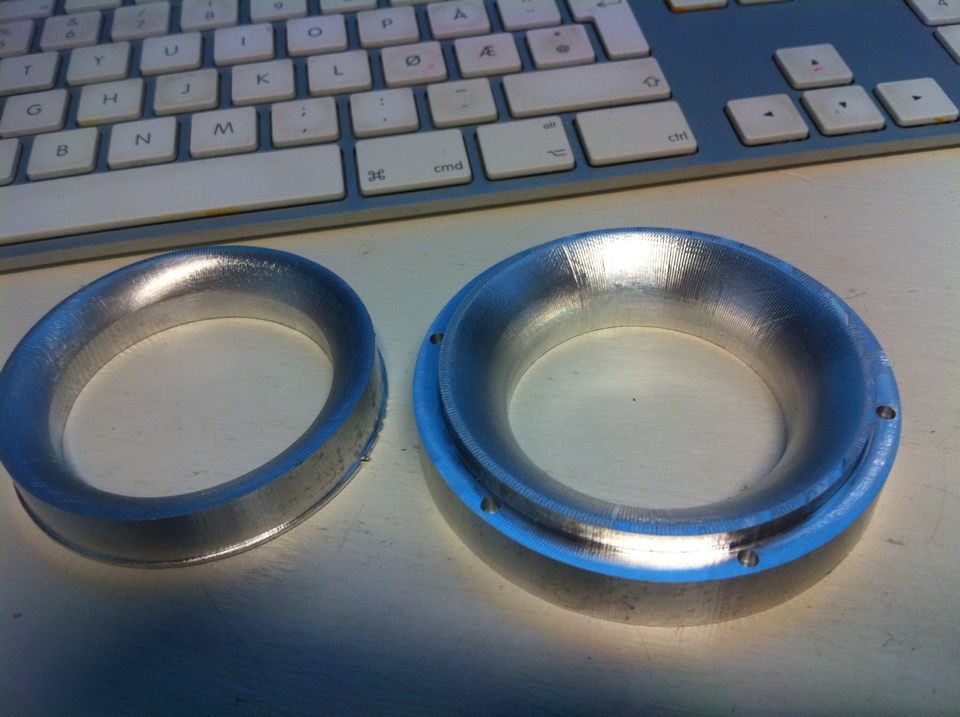 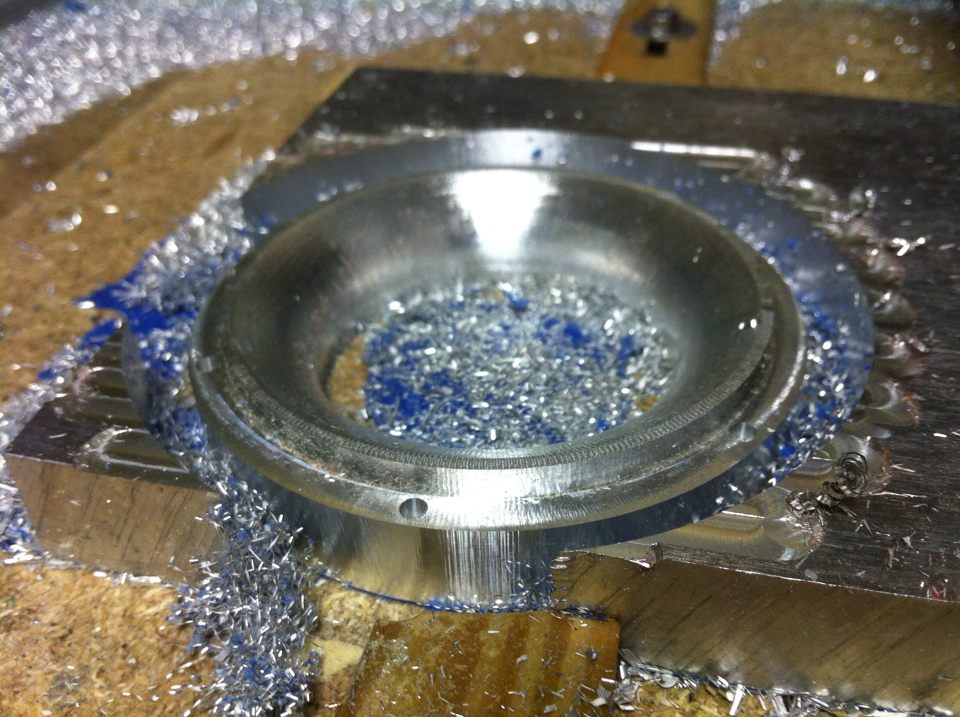 The traditional cutting board… my turn

My father-in-law´s birthday is coming up tomorrow, CNC to the rescue… I have wanted to do a wooden V-carving project for a while, using epoxy in-fill and this was an excellent oppertunity to test it out.
A while ago I picked up a couple of bamboo cutting board at Ikea, 450x280mm big.

Simple Easel Pro image import and tweaking, 40mins on the CNC and the rest was elbow grease

I am quite happy with it and the epoxy formed nicely to the V-groves.
Surface wet-sanded and buffed out with bees wax. 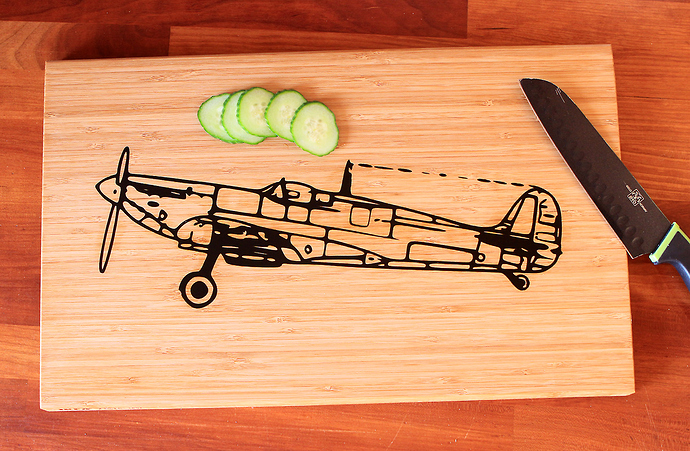 I have upgraded my CNC controller and wanted to include some added functionability while I am at it. The main controller box will be stowed away so it wont occupy table estate => the need for a “remote” became obvious.

I had a enclosure measuring 112x64x22mm which would easily accept the three switches needed, Abort (Red) / Pause (Yellow) / Resume (Green)

Simple and low-tech (cable not present): 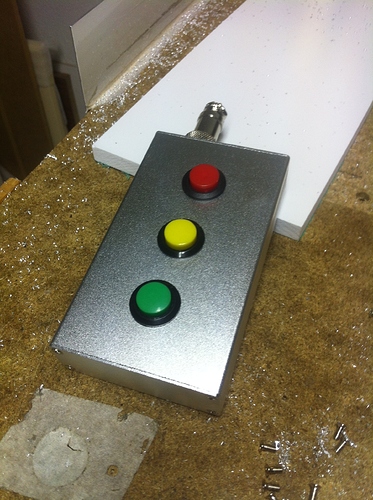 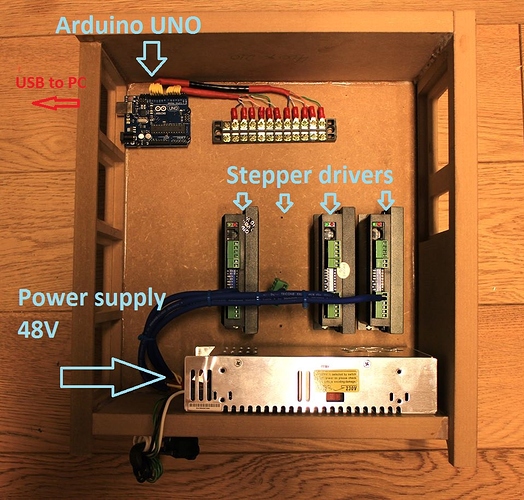 Carving SS316 sheet metal, this is a first for me!

Preparing the combustion chamber of the RC turbine I needed to drill out holes in SS316 steel, some time ago I obtained a sheet of 0.5mm and a 2mm 2F straight bit for steel work.

Tonite I finally put it to the test after postponing it for quite some time. 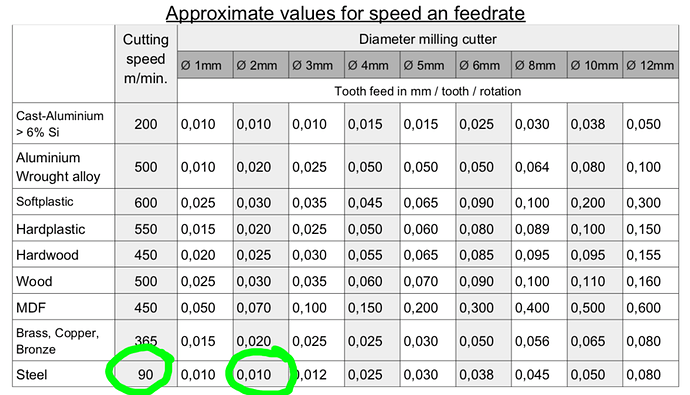 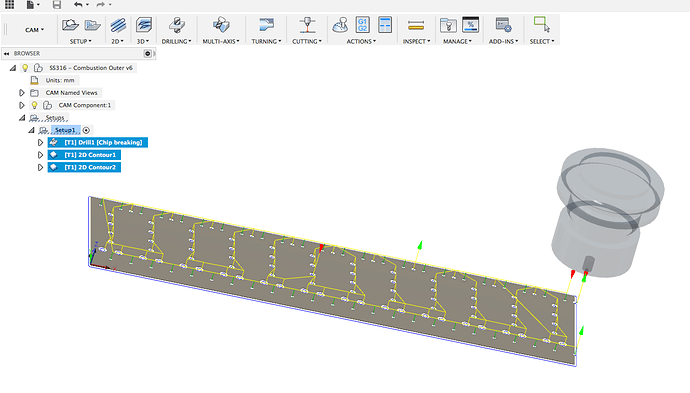 Here is the part drawn out in F360 and tool paths have been generated. Since a few of the holes are the same diameter as the end mill I chose a peck drilling operation for those, and regular 2D contours for the rest (Ø2.5, Ø3,5 and Ø5mm) and a 3rd operation for the outline. Part was cut oversized and cut true to spec on the CNC. 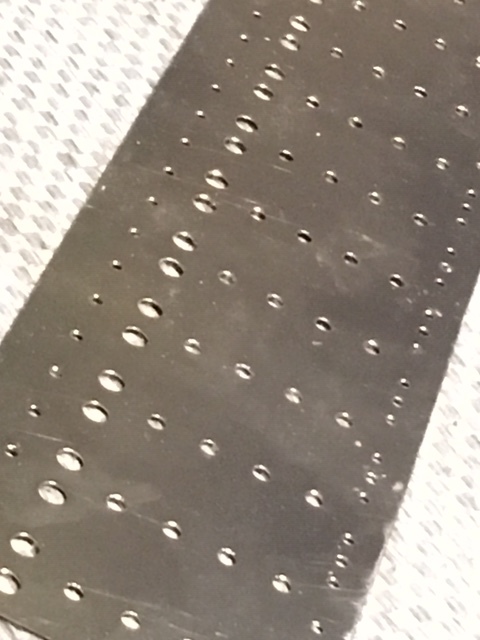 What this sheet of metal is intended to become: 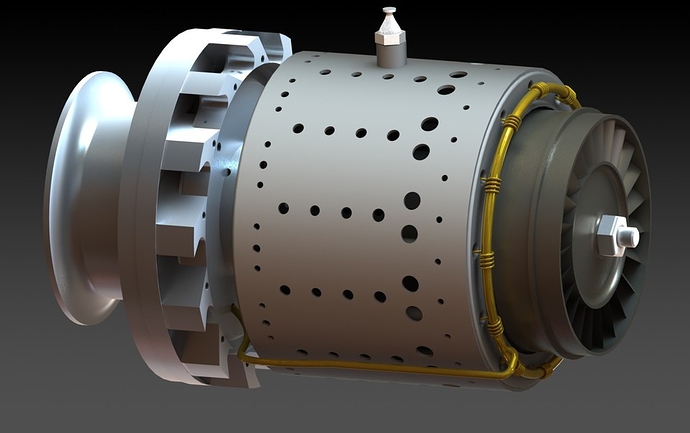 I broke my bit

Most likely due to lack of cooling… The holes went well (200 of them ranging from 2mm to 5,5mm in diameter but the rectangle outline caused problems. I saw the bit go red then bye-bye…
Luckily the part was practically complete when the bit died

Got a new bit and continued with the sheet cutting, this time it worked without issues

Reduced depth per cut to 0.2mm per pass and used WD40 + water for cooling.

Have also tried spot welding for the first time, using copper bars and a 12V starter battery. Crude in every sense, but look half decent… 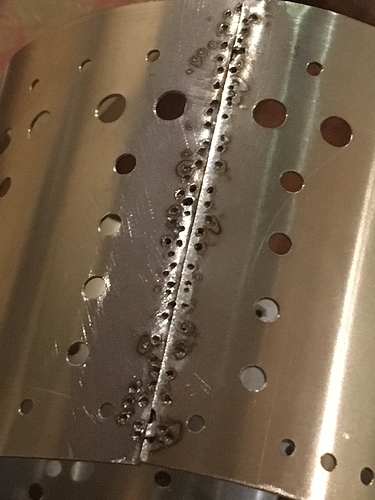 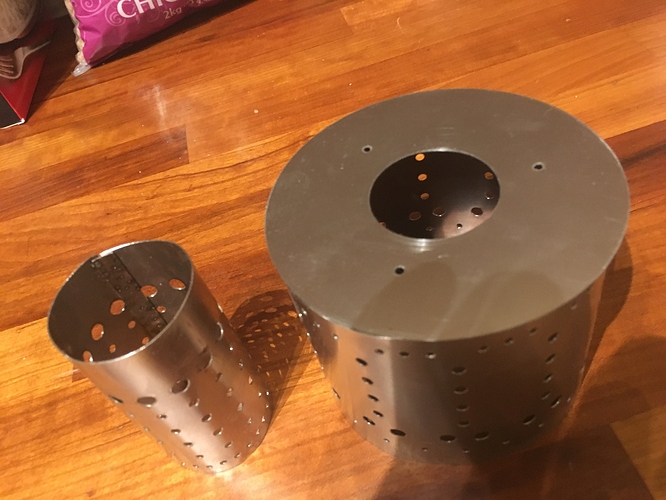 Small update after waiting for a new SS bit, used a 3mm tungsten carbide this time for added strength. Finished routing the rear wall and needed to turn the flanges for both front and rear wall. CNC’d MDF rings with appropriate diameters and sandwiched the steel plates inbetween with tape and CA glue. Forming the flanges with a hammer and light tapping came through

Also spent some time with the CNC itself so maximize accuracy so I can CNC the front covers and diffusor. Tolerances are tight! 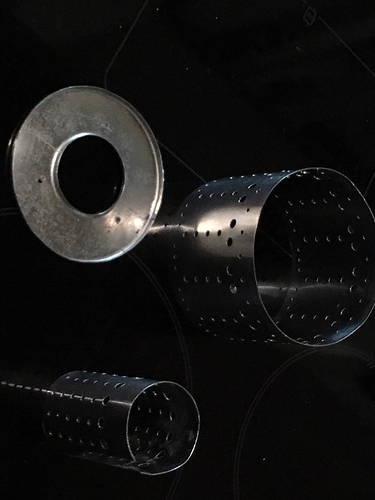 Edges are a little rough as I didnt cut all the way through (uneven bed) so I needed to break the excess off with pliers. Not critical. 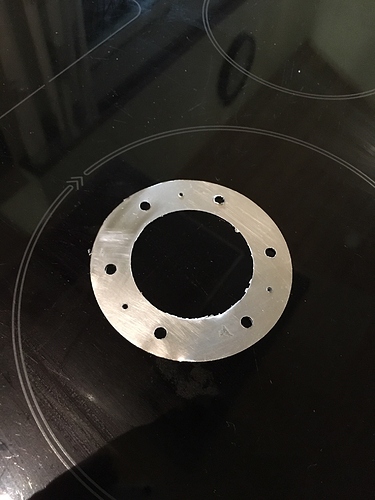 Wanted to make a new diffusor as my first attempt had some flaws, chucked up as a learning experiment

I also needed to tweak some dimensions for the diffusor to better match a few other components.

So loaded the CNC up with a new billet and started carving.
Main cutting was done using a 6mm 2F end mill with the following cut parameters, all done in Fusion360:

Here the new piece is shown, the compressor in the middle is store bought. 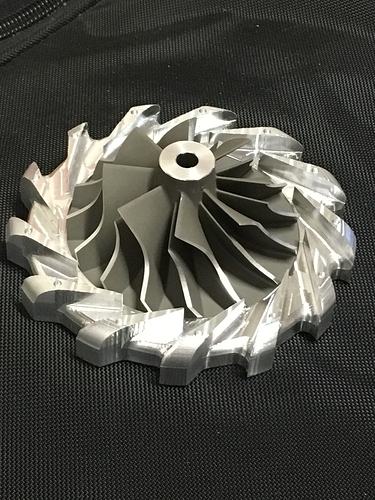 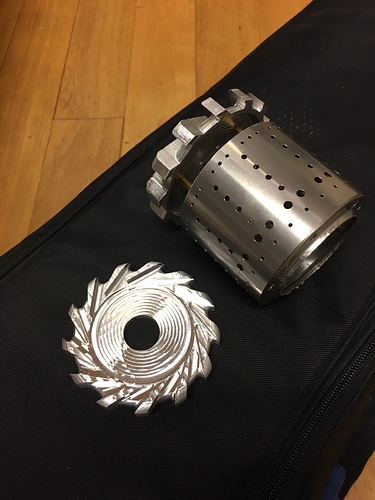 Thank you @PhillipLunsford - this is an ambition project with no guaranties, but I am learning a ton

I shot some video of my CNC in action tonite, here are a few angles during some of the various stages.