I just finished mounting Keyes Hall effect sensors this weekend for homing. I was aiming for hard limit switches as well, but I am still getting too much signal line noise even with shielded cables and .47uf caps.

I used hot glue for now. I wanted something temporary so the system can be tested for a while before making any permanent alterations. Also, if I crash an axis where the sensor is held on with glue, the sensor is more likely to pop off instead of being destroyed.

For the Z-axis, if you are standing in front of the machine, I mounted the hall effect sensor on side with it’s bottom blued to the left edge of gantry mount. The magnet is a ceramic bar type on the z-axis mounting plate, and is extended past the top of the plate to be able to trip the sensor.

One thing I noted about the hall effect sensors - they are more sensitive if you approach and pull off from the side as shown in the pictures. My pull-off is set to 3mm, but I could have turned it down to 2mm. If you approach them from the top or bottom, I had to pull off 5mm to get the switch to release. 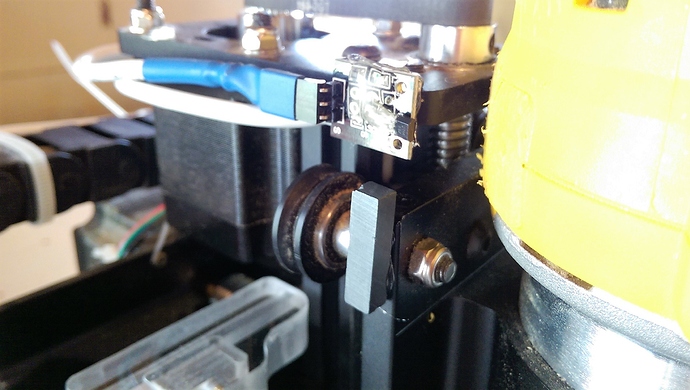 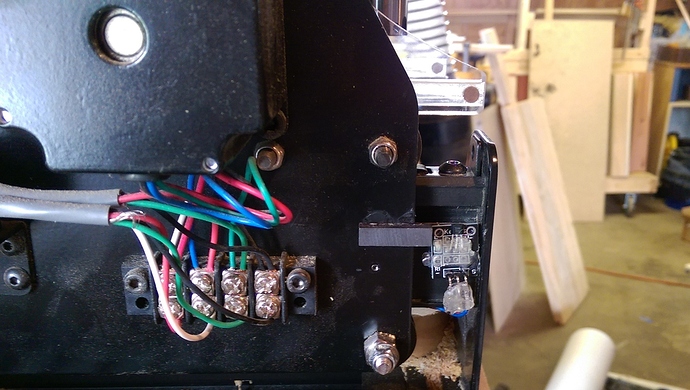 Thanks for the tip on the hot glue. I got all mine mounted last night and it worked like a champ.

Setting $5=1 just won’t work without extra circuitry since the signal pin always goes low when the sensor is triggered. It took me a long Saturday to figure that bit out

I’m still a novice on the electronics side of things.

The main advantage of the Keyes sensors is they are inexpensive… 0.99 apiece.

I have an analog bench oscilloscope and it appears that the noise is originating from the arduino/gshield side instead of the cabling. I am going to try putting some distance, then shielding between the gShield and the Arduino to figure out if the signal is leakage from the drivers.

One other note on the Keyes sensors… they take 5V in and output 3.3V on the signal line, so they cannot be wired in series. You can just tie the signal pins to the limit switch pin in parallel though - if either one is triggered it pulls all of the pins to ground.

I am using these with no false triggers or shielding… https://www.tindie.com/products/Kardacian/magnetic-sensor-hall-effect/

Those are nice. They already have filtering built into them. I wanted to take the hard road to improve my electronics skills, otherwise I would have bought these from the start!