Handy tips for beginners about the XY origin

So all of use were beginners at some point, and we’ve all made some crazy mistakes over the years. One fo the highest areas of confusion and mistakes I have seen is around the XY 0 coordinates. This method has saved me a lot of machine crashes:

So why do we need an XY 0 (work coordinate system zero) at all? Doesn’t the machine know it (especially if I have limit switches? I hear you ask… Well if you came from a 3D printing world as I did, this seems like CNC mills such as the x-carve are stupid in comparison. Well they both work identically in fact, it’s just that your 3D printer only cares about finding the print-bed (which in theory is empty) so it doesn’t need to find the thing to work on. As long as the machine knows were the print-bed is, it’s happy. But remember you can put you stock anywhere in the 1000x1000 of the washboard as long as it is reachable by the spindle. So it has no idea where you stuck it. I hear you ask about the XY origin printed on the washboard (probably the largest disservice to beginners ever), which is useful for somethings, but actual machining it is not. If you’ve watch @PhillipLunsford’s excellent tutorial on the origin moving around, you will note in many of his videos (particularly in Easel) that he flings the origin around with abandon, because it doesn’t matter to the machine what the origin is, just that it is there. However to you the human where that origin ends up matters a huge amount as you generally prefer your job to cut up your work piece not the coffee cup you left on the spoilboard.

So why am I bringing all this up. Well this mostly pertains to newbies who have decided to move beyond Easel (although with easel you can still do this) which is to check the tool paths relative to your selected origin. So if you use CNCJS or UGS to send your jobs to the x-carve (or are using a fancier mill with a controller console) you get a really nice g-code visualization and typically this is displayed against the origin. So most of us use the bottom left corner of a square stock as our origin by default (it’s closer, and humans are lazy) so we move our tool right over that corner and set that as our work coordinate X0Y0. But that tells the machine now where that spot is in the real world, and all the operations are relative to that spot. In V-Carve pro (fusion, Easel, etc) you have a point selected 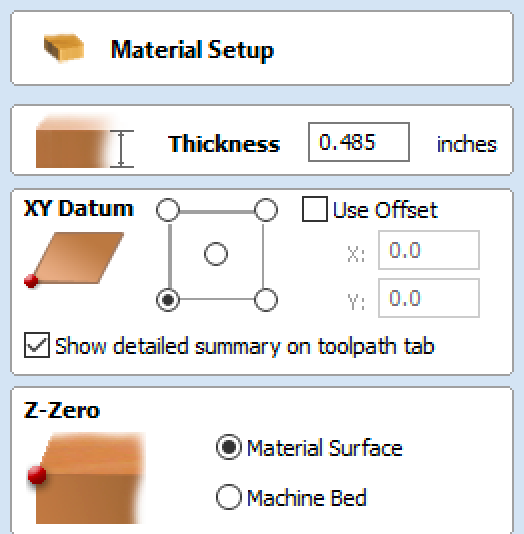 2021-01-01_08-41-10524×534 21.1 KB
for example that is how v-carve pro defines the origin (they’re British so they call it a datum, but they’re tin the midst of Brexit, so we can cut them some slack) So if you selected the top left corner or middle but on the machine zeroed against the bottom left corner your job would be running inverted since all parts of the job would be “below” those selected points (positive Y is up, positive X is right) so your machine would crash into the front of the Y-rails.

So my tip is look at the screen of your g-code sender and after highlighting the origin, make sure the projected movements are the direction you expect them to go. I can’t tell you how many times this has saved me from crashing the mill. This happened to me last night (must have accidentally clicked top left on the setup). At that point you have 2 choices, go back into your CAM software (in that case for me V-Carve Pro) or rezero the machine to the top left corner.

For example for the job I did last night (I started in fusion, but just as an example here is selected the work origin for this operation) 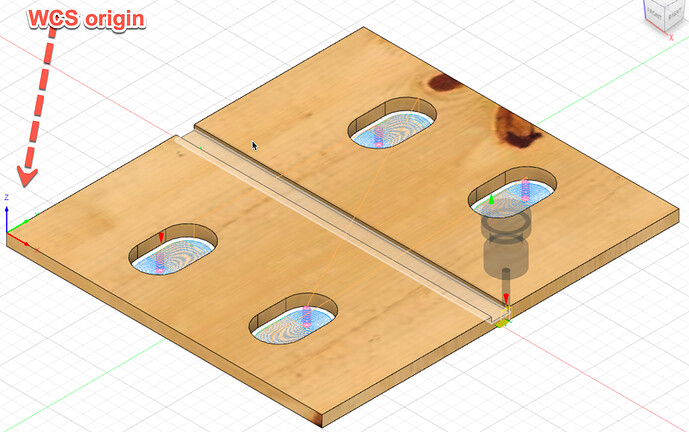 Now for a bonus tip you will have some jobs where you need to split the job into many operations (not in Easel since it’s not really built like a full fledged CAM package, in easel you split operations by splitting the design files into separate jobs) you often need to have a different origin setup. If you saw my post about the shot glass holders that job required 3 separate setups with 3 separate work coordinate systems XY0s. If you are going to do that you need to think about what is left after a given operation that you can probe against (or see in the case of the x-carve since it only has electronic Z-probing). Since that movie above I did it on my Tormach (there was a story about that) and my small tormach needed me to move the piece around to fit into the cutting envelope it required 3 origins). So in my definitions for the tool paths I changed origins to whichever easily reachable outside corner I could find (in truth with full 3D electronic probing you can do crazy stuff like probe for the center of a circular pocket, etc as your origin, but by hand that would be terrible. So when planning your multi-setup jobs you need to leave yourself something to probe against after each operation 9that applies in Z as well). For z I have often kept a piece of the same stock (so say a small piece os 3/4" ply of the same board that I am using to probe against if nothing of the original surface is going to be left. Now mind you if the setup (stock, tool) doesn’t move there is no reason to change origin points. On my Tormach since it uses toolholders and a pneumatic power-drawbar there is no force in changing tools, so I don’t worry about having to reprobe with my tool changes (I mean I’ve had to reprobe a few times that way in which case using the center/top part of your piece is always a good choice as you can generally still find the center of your thing…