Has the dog been fed?

Did you feed the dog? Has Wilma had Breakfast/lunch/dinner? I always get those messages or have to send those messages because one or the other of us left for work early and we don’t want to double-feed the dog.

So I thought I’d over-engineer the situation and make something. 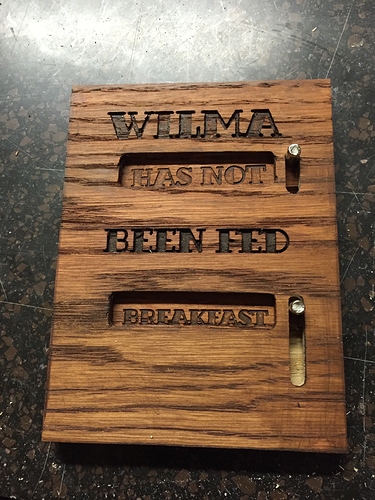 And here’s a short video of the item in action. Please excuse the vertical-video potato cam.

I’m sure that in using this we’ll figure out ways to simplify it. I’m already thinking that there doesn’t need to be 2 logic gates when one will do. Either “has/has not” or just leave “has not” static and allow the slider for the meal. That way when someone feeds her the meal just slides to the next one. In other words, once she has breakfast, she “has not” had lunch, so you slide to lunch. Then when you feed her lunch, you slide to dinner… etc.

I made this using 1/4" oak for the top and bottom, and 1/8" oak for the inside sliders. I cut 5.1mm holes for the metal pins, which are just shelf pins I bought from Lowe’s and cut in half. I planed the top down a bit to get rid of some bulk, and used paste wax on the inside to help the sliders move more freely.

My X-Carve and I weren’t getting along today and I was quite frustrated and just wanted this project done. I very likely will remake it soon, but I thought the idea was neat and wanted to share. Hope you all enjoy!

Brilliant! My wife has been wanting a sign for our dishwasher to show Clean/Dirty status.

Your idea would be perfect for that Thank you for sharing…

That’s a great idea! It would be easy to modify that to help keep track of when my kids got their medicine. “Prissy/Fancy/Rowdy” last had medicine on “Monday/…/Sunday” “morning/afternoon/night”. I imagine the days could be cut into a 2 wide x 4 tall table that could be manipulated with sliders on the bottom and top.

I was thinking about that too…

I might consider doing pockets in the back side to hold magnets, and I’d probably either grossly plane down the front piece or make the window beveled so that it doesn’t cast as much of a shadow when viewed from extreme angles.

Hmm… perhaps you could simplify this whole project, and just have X-Carve feed the dog? Might require a little extra programming though.

Precision food heating, with personalized graphics etched into each portion! Perhaps I should start a new thread for this idea.

At the very least, mounting a laser engraver into an existing Salamander would be quite a marketable idea.